Even though I'm not officially in the punctuation-advice game—I refer seekers to Grammar Girl—I can't resist joining in today's celebration of National Punctuation Day. Here's a quartet of items about one of my favorite puncutation marks, the semicolon, that have the added advantage of also being about brands, design, and marketing communications.

1. Encore Careers, which helps baby boomers make the switch from midlife work to "encore careers," uses a semicolon to elegant effect in its logo:

The website's home page reinforces the concept with a headline:

Here's how the organization's newsletter explains it ("What's Up with That Semicolon?"):

Between Then and Now is a semicolon, the pause that represents the transition, the time to rest, reflect and retool for a new stage of life and work. The new Encore.org is focused on that transition.

2. Encore isn't the first brand to use the semicolon creatively. Wit, the play by Margaret Edson that won the Pulitzer Prize for Drama in 1999, was published in book form with this cover: 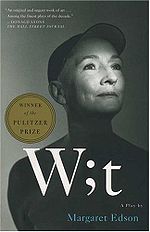 According to the Wikipedia entry,

3. In "Learning to Love the Semicolon," Visual Thesaurus Executive Producer Ben Zimmer documents some recent "rumblings of appreciation for the semicolon," from New York to Paris. I love the New York subway sign that correctly employs the semicolon in its admonition to newspaper discarders: "Please put it in a trash can; that's good news for everyone."

4. Here's something I wrote about the semicolon last year. The Semicolon Appreciation Society T-shirts are still available!

I also have some sad semicolon news to report. According to a Hubspot study published earlier this week and reported in Fast Company, there are "nine scientifically proven ways to get retweeted [have your message forwarded to a new set of followers] on Twitter." Using a semicolon is not one of them; indeed, Fast Company summarizes this finding as "Semicolon = Satan." Hubspot's viral marketing scientist,* Dan Zarrella, goes so far as to call semicolons "the only unretweetable punctuation mark." 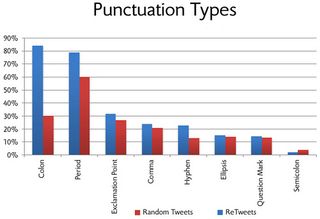 * File that one under "job titles that didn't exist when you graduated from high school."

Posted at 07:29 AM in Naming, Punctuation, Theater, Twitter | Permalink

> In the context of the play, the semicolon refers to the recurring theme of the use of a semicolon versus a comma in one of John Donne's Holy Sonnets.

That reminds me of when I studied Beethoven's 8th Symphony, and learned that a certain chord change was one of the funniest musical jokes ever.

The semicolon also might work as a symbol for "punctuated equilibrium" -- since we're honoring National Punctuation Day.

Oh Good. I knew you would post about this special day! I had no idea it existed and will remember it as it's two days before my birthday! Nice post!