Here's one from the What Were They Thinking? file: the Klondike Man Cave.

You remember the Klondike bar, the chocolate-dipped ice-cream treat with the cute polar-bear mascot. It was invented in the 1920s by the Isaly Dairy, near Youngstown, Ohio; until the 1970s, it was a regional brand sold only in Pennsylvania and Ohio. In 1982, the company opened a factory in Florida and began nationwide distribution. It also began a national ad campaign with the slogan "What would you do for a Klondike bar?"

The brand's current campaign is dubbed "What would you do for a Klondike bar NOW?" And the answer turns out to be: sacrifice every last shred of dignity and brand integrity.

It seems that Klondike—or more likely its agency, Story Worldwide— has decided that its core customers are men ages 25 to 45. (Because we all know how much women hate ice cream. And chocolate.) And who deem the Farrelly brothers and Judd Apatow a tad too sophisticated for their taste.

When you go to the Klondike site you're immediately propelled into a messy kitchen whose centerpiece is a freezer with a sign that reads: "Dude, you won't believe it. This freezer is packed. Check it." Two more clicks and you're in the Man Cave. Wanna play a game? Sure you do. Are you a Big Boy? Uh, sure you are. Go ahead. 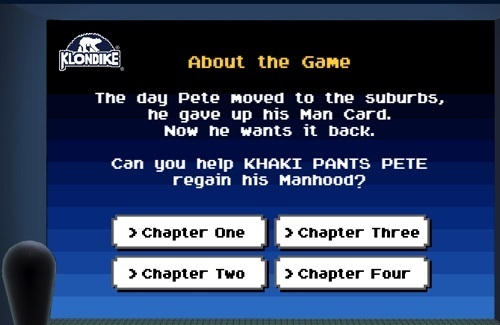 Welcome to the adventures of Khaki Pants Pete, also known as Pete the Pounder (you read that right), trapped in the 'burbs with a virago of a wife, two bratty kids, and only the nubile babysitter, Chrissy, to remind him of the Peter of yore, the stud he used to be before he "gave up his Man Card."  Your mission: to return poor Pete's testicles to their rightful place.

Want ice cream with that?

Here's how Jezebel, the celebrity/sex/fashion site, puts it:

Remember when people would dance poorly or hop on one foot for a Klondike bar? Well those days are gone; now, they enter the Klondike Man Cave, where taking your 21-year-old babysitter to a sex shop is all the rage.

Yep, Pete's adventure includes a stop at Skinema Paradiso, but that's just the beginning. He (and Chrissy) also visit a nightclub, where Pete enters a pudding-wrestling contest. 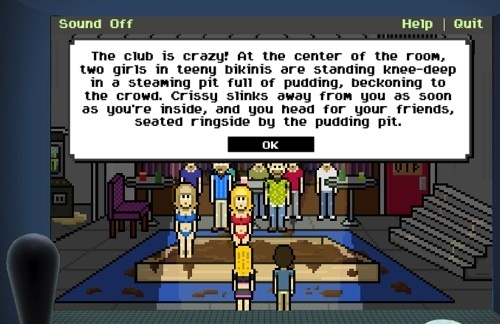 Indeed, TOTAL MARKETING FAIL. Be sure to read the comments on the Jezebel post, which nail the bizarre offensiveness. A sampling:

"I don't think even Don Draper could sell this one."

"i used to be an advertising creative, and i can't even fathom the brief that was behind this one. ... i feel like it was created for something else, then dusted off and sold to Klondike when the original client rejected it."

"Actually, the really galling thing about this is that no one will play the game--too wordy, nonsensical, not funny, and who plays this stuff other than 12 year olds?--but SOMEONE thought that this would be funny and, despite the fact that this thing probably went through about ten different desks before it even got made, NO ONE thought to say, 'Uh, maybe this is is a bad idea. On multiple levels.' Disgusting."

"Ok, so clearly Klondike has decided that women never eat or buy their product, so they can afford to alienate the entire gender with their horrible, offensive marketing. Ad exec FAIL."

By the way, Klondike's parent company is Unilever, which also owns the Axe brand of men's "body products," as well as Dove products for women. Unilever's "Purpose & Principles" include "Always working with integrity," "Positive impact," and "Setting out our aspirations."

Dude, I don't believe it.

If the reference to man caves has piqued your interest, check out The Official Man Cave Site and Man Cave Worldwide (which "empowers the everyday guy to be all that is man" and holds "MEATings" that are "like Tupperware parties with testosterone").

Posted at 12:37 PM in Branding, Food and Drink, Man-Words, Marketing, They Said WHAT??? | Permalink

Because nothing makes a man want ice cream more than thinking about a half-naked woman sitting in a steaming pile of ... pudding.

Thanks for the laugh! I'm just glad here in CA we can get the It's It Ice Cream sandwich.

Remember the Dove Campaign for Real Beauty, though? And remember that the guy admitted to the New Yorker that he airbrushed the Real Beauty models? I guess the Skinema in the Man Cave isn't too far a step down, integrity-wise...

It's time for the Klondike Bar to head back to the Brand Cave--or maybe it never left . . ..

I will certainly never eat a Klondike bar again.