Word of the Week: Mancession 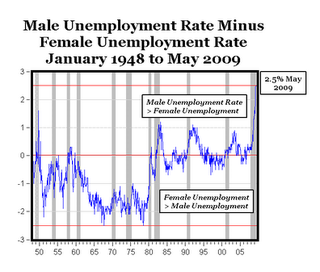 Mancession: A recession that hurts men more than women. Also spelled man-cession. Not to be confused with man session.

Losing his job has wounded Mr. Winkler’s self-esteem and strained his 14-year marriage. In the lexicon of the modern recession, he has found himself at the center of the “man-cession,” the downturn that has hit men much harder than women. According to the Bureau of Labor Statistics, the gap in the male-to-female jobless rate is at a record high: 2.4 percent — 10 percent for men and 7.6 percent for women.

Those statistics were published in December 2008, which is when man-cession first appeared in the press. (The trend was noted as early as May 2008.) The popularity of the term has been attributed to Mark J. Perry, a professor of economics and finance at the University of Michigan who writes a blog called Carpe Diem. On Dec. 5, 2008, Perry called the trend "The Male Recession"; by Dec. 9 he was using "Man-Cession" in a headline; he's used it consistently ever since. However, the term may actually have been coined by Canadian Economics Press*. Perry quoted this paragraph from CEP in his Dec. 9 post:

It's not a recession, it's a man-cession. And the lipstick economy may have only just begun.The U.S. recession has been a catastrophe for men, but merely a downturn for women. According to Friday's payrolls report, eight out of every 10 pink slips in the past year have gone to men.

Mancession sightings multiplied in the spring and summer of 2009, as the employment numbers showed no signs of improvement. "Is this a Man-Cession?" asked California Budget Bites in April. "It's Not Just a Recession. It's a Mancession!" read a headline in The Atlantic in early July; the article quoted Mark Perry extensively and reproduced his charts. The article concluded: "The Great Mancession, as silly as it sounds, could be deeper, and more long lasting, than the Great Recession." On Aug. 10, Gawker called mancession "our favorite new word."

I've been reporting on man- as a combining form in brands and colloquialisms for a couple of years. Go here to read my posts on Man Glaze, ManQuarium, Mansinthe, MANdles, and more.

* No link, because CEP appears to have imploded. Montreal-based media observer Ann Brocklehurst covered the story.

Posted at 07:19 AM in Economy, Man-Words, Word of the Week | Permalink

I believe that the mancession is being caused by fundamantal changes. Manual labor is being maneuvered out so men cannot buy mantrucks, and many other things.They also cannot get manried and have a manchild.Is this the end of a maniacal cycle? Don't ask me. I have to get a manicure... at the hospital.