« Word of the Week: Name-Checking | Main | On Beetle-ness and Daffodility » 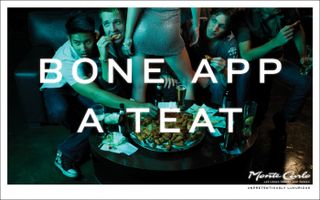 My latest Candlepower column for Visual Thesaurus ("We Speak Brandish. Do You?") looks at fanciful brand vocabularies with invented words or whimsical spelling. My inspiration was a new ad campaign for the Monte Carlo resort and casino in Las Vegas, in which French words (and even a couple of English words) are respelled phonetically: TRAY SHEEK, BONE APP A TEAT, DUH BOTCH OR EE.

Brands have been taking liberties with language for decades (quoting myself here):

But it's really in the last decade or so that creative directors have made neologisms and language play a competitive sport. One of the first brands to experiment with phonetics was the California winery Clos du Bois, which in 1996 launched an outdoor ad campaign that helped monolingual Americans with a pronunciation guide to the winery's name: CLO DEW BWAH. ("See voo play" was the follow-up.)

In 2003, the American film director David Lynch, known for his hip, surrealist vision, created "Do You Speak Micra?" a European TV campaign for Nissan's tiny Micra model. A pair of giant blue lips uttered words from the Micra language, all of them awkward portmanteaus: spafe (spontaneous and safe), modtro (modern and retro), simpology (simple and technology).

Read the full column*, which also covers the Sprite "lymon," the Snacklish lingo invented by Snickers, and the fictional disease that proved very, very profitable for one household name. Don't miss the reader comments.

* You'll need a Visual Thesaurus subscription to see the full content. Go for it!