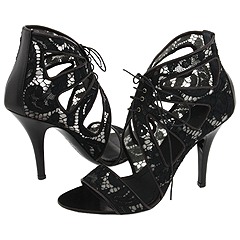 Behold the bureaucratically named yet seductively styled Givenchy 593933, a lace-and-leather contrivance with the power to transform shy damsels into stuff-struttin' vixens.

First, however, they must avoid gagging on the Zappos copy:

Bewildering wild beauty! Grasp the reigns of gorgeousness and masterfully maneuver through the macabre with the romantic secrets of this beautifully bewitching sandal by Givenchy™!

Even at the marked-down price of $546.75, I expected better from the formidable House of Givenchy. My complaints:

1. "Bewildering" means "perplexing" or "confusing" (its original meaning was "led astray into the wilderness")—which may describe your response to the shoe, but probably isn't what the company intended. Combining "bewildering" with "wild" is either redundant or ignorant. Possibly both.

2. Those graspable leather items are "reins," not "reigns." But even spelled correctly, "the reins of gorgeousness" sounds silly enough to belong in The Princess Bride alongside the Cliffs of Insanity, the Zoo of Death, and the Rodents of Unusual Size.

3. Besides being over-alliterative, "masterfully maneuver through the macabre" does not mean—to cite The Princess Bride again—what they think it means. "Macabre" means "representing or personifying death"; synonyms include "horrifyingly repellent," "gruesome," and "ghastly." So unless you're planning to tiptoe through the tombstones, or mince around in a minefield (in these shoes?), the image is dead wrong. (On the other hand, the images on the Givenchy website are pretty Halloweenish.)

4. Oh, and you're doing the macabre maneuvering "with the romantic secrets." Yes, that totally makes sense.

6. When you're maneuvering the macabre, two exclamation marks are two too many.

7. Finally: the trademark symbol. Even if you're a strict constructionist, you'll surely agree that it's a party pooper. On the one hand, or foot: upscale fetish wear with toe cleavage, black lace, and a hint of bondage. On the other: a scolding lawyer. I say get rid of the (TM).

Fashion copy often is more whimsical than logical—just look at what it's selling!—but effective fashion copy has an internal logic that pulls the reader into a credible fantasy. The 593933 copy just says: "I am in desperate need of remedial English classes. Send many hundreds of dollars now."

* I blame Givenchy, not Zappos: this online retailer almost always picks up the copy provided by the manufacturer. There may be a French-to-English translation issue here, but in no human language would this writing not stink.

Did someone say "scolding lawyer"? Ooh, Mistah Kot-TER, pick me! Yes, delete the "tm." When you are referring to the company and not the brand you go without "tm." If they'd said "this Givenchy™ sandal," however, it'd be ugly in copy for certain, but acceptable. Using trademark symbols to refer to the company itself is high on this scolding lawyer's list of copy errors.

Oh, and that shoe? As ghastly as the copy.

Isn't is also true that only the owner of the trademark is obliged to use the TM, and those referring to the product or company are not? (And will someone puleeze tell clients that it is not necessary to use the TM or R more than once?)