They Left Their Words in San Francisco

I'm crazy about this map: 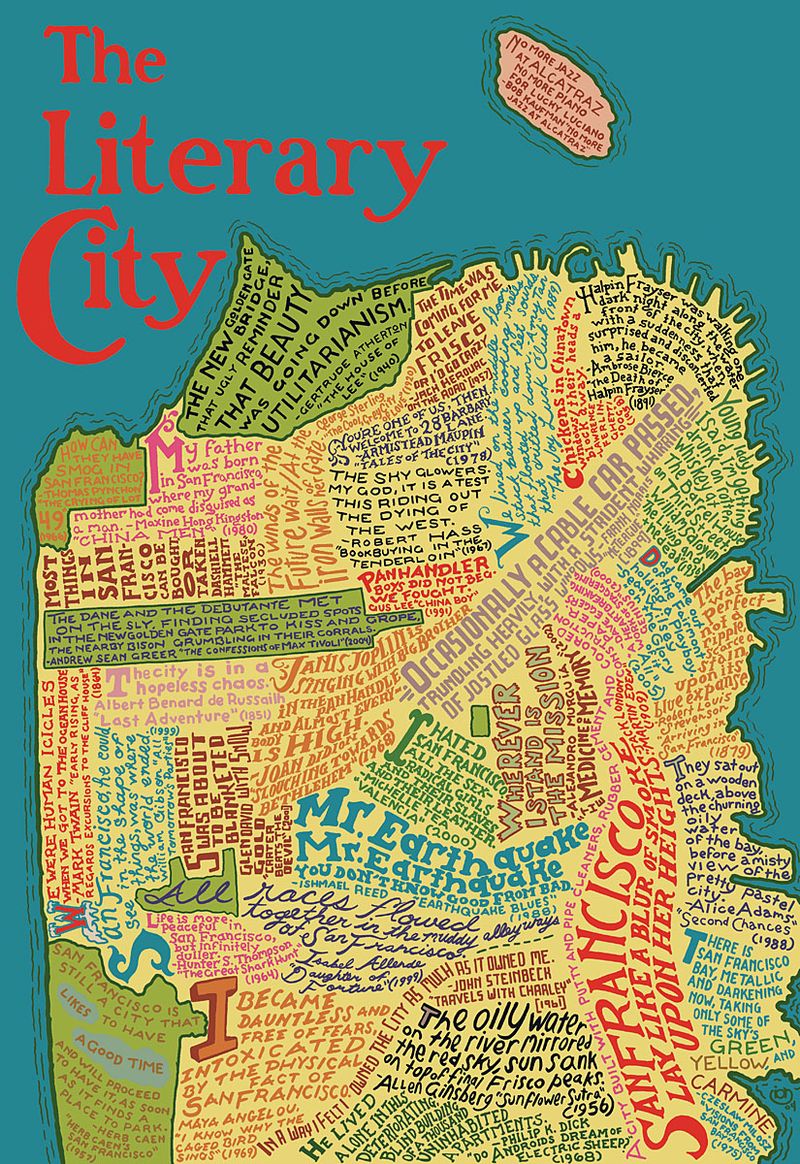 It's the cover of the book-review section in yesterday's San Francisco Chronicle; it was created by Ian Huebert, "loosely inspired by one of St. Petersburg, Russia, by Vera Evstafieva and Andrew Biliter."

Not only are the colors and calligraphy delightful and the quotations well chosen, but you can identify many of the locations from their corresponding quotes: The Golden Gate Park quotation fills a GGP-shaped space; Robert Hass's Tenderloin quotation occupies the Tenderloin portion of the map.

I got a laugh out of this sniffy observation, right about where the bridge's south tower would be: "The new Golden Gate Bridge, that ugly reminder that beauty was going down before utilitarianism." No one reads the author, Gertrude Atherton, these days (although her husband's family estate became the town of Atherton, near Palo Alto); the Golden Gate Bridge, however, seems to have passed the test of history. But Atherton's comment belongs on the map because it's echt San Francisco: The city may appear liberal to outsiders, but in matters architectural it's downright Tory. Every single addition to the skyline, from the Transamerica Pyramid to the recent DeYoung Museum redesign (which I adore), has been met with gnashing of teeth and predictions of doom by the self-appointed guardians of the architectural status quo.

As for the map itself, I was sure the Chronicle would be selling a high-quality poster-size print of it. But no! The accompanying article says only this: "We encourage you to get out some tape or tacks and pretty up that bare wall or window with this map." Seriously? Hang a sheet of newsprint on a wall with tape or tacks? That's just cheesy. And it's dumb of the Chron—which is hemorrhaging money—to pass up a revenue opportunity like this one.

I left a comment to that effect online, and encourage you to do so, too (although site registration is a nuisance). Meanwhile, I checked out the website of artist Ian Huebert. He's not selling posters, either, but maybe (if he's retained copyright) he could be persuaded to. And lookee here! Not only does he live in Oakland, he's practically a neighbor of mine. Yoo-hoo, Mr. Huebert! I'd even stroll  over and pick up a print from you.

UPDATE: Just got an email from the Chronicle's book editor, John McMurtrie: "We hope to offer a high-quality print of the map soon. I recently tried to put something together with the business folks here—while doing a few other things in this one-man department!—and I'll pursue it again soon. When a poster is available, I'll make a note of it in the Books section."

Typography trivia: Huebert's rendering of the map title reminded me of the logo of Francis Ford Coppola's City Magazine, which flourished briefly in the late 1970s.

Love the diamond-shaped dot over the i.

By the way, the proper shorthand for San Francisco is "The City." Locals never, ever say "San Fran." Or, perish the thought, "Frisco."

Posted at 10:33 AM in Books, Maps, Media, San Francisco | Permalink

Ugh, so typical. I've said it before and I'll say it again: the Chron deserves whatever it gets, because it can't stop asking for it. Hope that Huebert can make something of it, though.

Oh gracious, there is only one "The City." New York. (haughty sniff).

I think there was a question on the Harvard Dialect Survey about which city is "The City." Several eastern and western cities were possible answers, if I remember correctly.

As a non-SFBA-local-but-native-Californian, I shudder at "Frisco" and "San Fran". But as a linguist, I see it as a signal--if you say it, you're not from around here, so I'd better be nice to you, so you'll learn how we really designate it!

One more thing--do you read Strange Maps? (Hmm, have I already asked you about it/pointed you to it? I recommend it often.) If you like this one you've shared, I think you'd enjoy a lot of what is posted there.