This term was so unfamiliar to me that I thought at first the photo was taken outside North America: 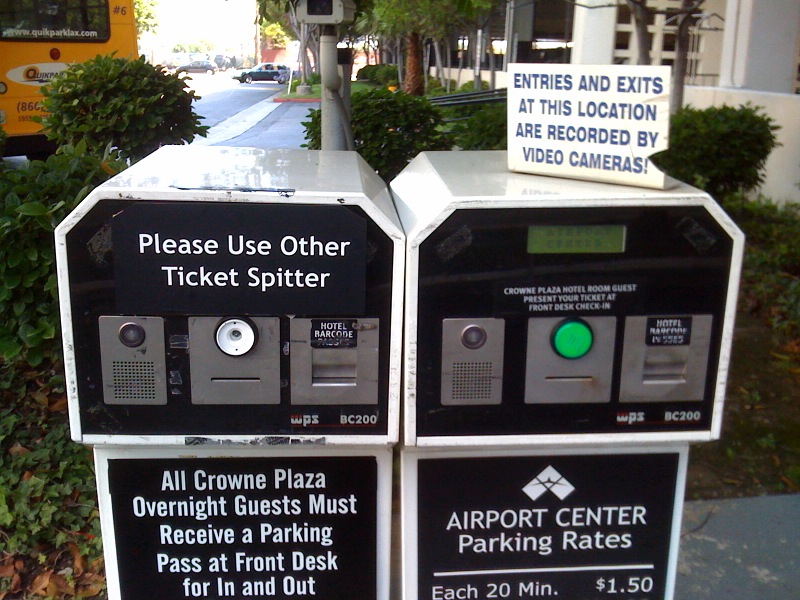 "Ticket Spitter"? It sounds (a) unhygienic and (b) angry. But it's absolutely born in the U.S.A. In fact, it's been a registered trademark of Federal APD of Novi, Michigan, since 2002. A vendor, DGO Access, says the Ticket Spitter® (full name: Smart System Transport Ticket Spitter®) "utilizes contemporary technology to provide you with a completely flexible system for machine readable parking operations. The unit utilizes a modular SST Ticket Transport Mechanism that features robust components, magnetic read/write heads, thermal printer, and a Ticket Burster/Feeder mechanism that snaps apart tickets."

(Peeved digression: Can we stop with the utilizes already? Especially twice in one paragraph? Uses or employs does the job just fine.)

Because I know you'll ask, the "Ticket Burster" "eliminates the need for a cutter assembly by bursting the perforated  tickets apart as they ascend into the transport mechanism."

Hat tip to friend Peter F., who snapped the photo of this "linguistic loogie" (his term) at the Crowne Plaza Hotel parking lot near L.A. International Airport, and queried: "Did you come up with this appetizing name?" Sadly, Peter, someone else salivated over the assignment.

How did the Crowne Plaza Hotel and DGO Access miss the chance to make those machines into cute robots? The "Tickbots" could spit out pink tickets. Don't you think "Tickbot" would be better than "Spitter?"
Mom! Mom! Can we park at the Plaza?

My god, Nancy, so many amazing things to cosmment on on this page! The ticket spitter! ('Dispenser' was too pedestrian for them?) The Greeking Machine--genius! And of course, the Literary Map of SF, which reminds me of Maira Kalman and Rick Meyerowitz's "New Yorkistan" New Yorker cover--but in its own original way. How do you find these things? Have you already done a post on that subject?