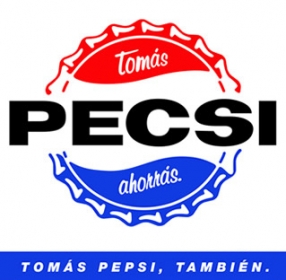 Something similar (minus the respelling) is going on with Pepsi in Quebec. Pepsi-Cola opened its first bottling plant outside the United States in Montreal, in 1934, and Quebecers have preferred Pepsi to Coke ever since. In fact, according to a report in the New York Times, "Pepsi’s main brand commands 29.9 percent of the retail soft drink market in Quebec, based on volume, compared with 12.3 percent for Coke." What's more, "The Canadian Oxford dictionary defines 'pepsi' as derogatory term for a French Canadian, 'from the perceived Québécois preference for Pepsi-Cola.'”

Pepsi's Quebec strategy actually goes back 25 years, according to a fascinating article in the Montreal Gazette, "How Pepsi Won the Quebec Cola Wars." In 1984, Pepsi launched a mammoth global campaign, "The Choice of a New Generation," starring Michael Jackson, David Bowie, and Madonna. Quebecers were unmoved. As a result, Pepsi Canada made the bold decision to abandon the New Generation ads and "develop an advertising strategy that would reflect the distinct society’s cultural differences, sensibilities and sense of humour":

“Young Quebecers in the 1980s ... were crowning their own celebrities and creating their own made-in-Quebec lifestyle,” wrote the J. Walter Thompson company in a submission to the Cassies, the Canadian Advertising Awards. “Research revealed an inner confidence among Quebec target groups. ...

“Since Quebec was culturally unique, it had developed its own entertainment system complete with its own stars,” especially in the comedy milieu. “It was a style of comedy that used typical Quebecois stereotypes to redefine the emerging new ‘street-smart’ culture of young, urban Quebecers.”

The theme of Meunier’s ads remained an intractable joie de vivre and an undying love of Pepsi. His brief, 30-second spots debuting in 1985 and featuring a variety of characters and a humour only Quebecers could appreciate became an instant hit.

In 2003, Pepsi launched a new Quebec-specific campaign "featuring five young men extolling the unique elements of Quebec (poutine, potholes, moving day and here we say 'icitte,' not 'ici') under the banner 'Ici, c’est Pepsi.' In the rest of the world, it’s Coke."

People in marketing talk a lot about listening to customers and adapting to local needs. In reality, global brands rarely walk the walk. It's encouraging to see a corporate giant literally speaking the language(s) of its customers in two relatively small markets.

* I've read that this is because the -ps- blend is difficult for Spanish speakers to pronounce. But Spanish, like English, contains a number of loan words from Greek with -ps-: sepsis, catalepsia, and so on. Maybe one of my linguist readers will shed additional light on this issue.

Great post, but wanted to correct the translation of the Argentine Pepsi ad. It actually says: If you Drink Pecsi, you save. If you Drink Pepsi, you also save.