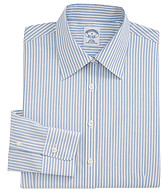 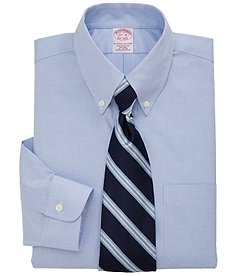 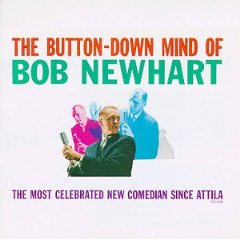 Posted at 11:45 AM in Enigmas, Fashion, Naming, Usage, Words | Permalink

Haha - brings me back a 3 decades to my first year of college at Fashion Institute of Technology in NYC. I learned all those terms. (what about shirts that button up the back?)

Generally speaking, a women's upper garment that buttons up the back is less tailored than a shirt, so it's called a blouse.

Wow, I learn something new everyday!

I thought pullovers were sweaters? Though, I only have heard my husband use the term to describe his jacket which has buttons -- so I figured there was some semantic creep there.

And then what are t-shirts if not shirts?

"If it didn't button up the front, it wouldn't be a shirt; it would be a tunic or pullover."

What about a T-shirt?

I learned the correct/original meaning of button-down shirt long after thinking it meant a shirt with buttons down the front.

@DEJ: A T-shirt is a subset of pullover shirts.

@Meg: "Pullover" usually describes a sweater, but shirts can pull over the head, too. (See directly above.)

Yes! I've noticed this, too. Thank you for pointing it out. But I have to agree with the others about T-shirts--though they pull over the head, I'd never call one a "pullover". It's always a shirt.

@The Name Inspector: OK, how's this: T-shirts are to shirts as Jockey shorts are to shorts. (Except for the Jockey brand part.) T-shirts originated as underwear; they're a sub-species of undershirt.

i have been ranting about the slippage of the term "button-down shirt" for years! we don't need a word for a regular shirt that buttons!

your blog gives me hope that it's not a lost cause.

My sons, who are in their 20s, call those shirts "button-up" shirts to distinguish them from button-down shirts.

It's more a generational thing. I noticed my son (now 28) referring to his button-front shirts as button-down shirts some years back.

Oh that's true! I hadn't really thought about it. How funny.

I want somebody to tell me why fashion people say "a pant" and everyone else says "pants". And where do slacks fit in?

Forgiveness if this has already been covered.

Also, the husband is from Ireland; we've got a fight going on over what the children idea of "jumper" is.

Yeah, British jumpers and U.S. jumpers are not at all the same thing -- although buttons may be involved in each.

I can't stand it when my husband wears his button down shirts unbuttoned...it just looks wrong. But I refuse to dictate his dress style...that would be controlling : )
Button down shirts are also very "preppie"...Brooks Brothers in US; Jack Wills in the UK has picked up on this style for younger market.

First of all, I loved this article. Haven't had to think about different shirt names in years. I suspect that we categorize button-front "men's style" shirts (dress shirts, guayaberas, aloha shirts) differently from knit shirts (t-shirts, polo shirts, turtlenecks).

In Australia, turtlenecks are "polos," cardigan sweaters are "jumpers," pullovers are "pullovers," sweatshirt tops are "sweaters," and undershirts are "skivvies." Oh — athletic shoes are "trainers," and swimsuits are "bathers."

All this time, I've been understanding "button-down" wrong. I still don't really understand why a shirt with buttons on the collar wouldn't be called, you know, a "button-collar", but there is little good in quibbling the vagaries of language. :)

At least I have the excuse of being female, and thus not being accustomed to button-downs as a semi-formal alternative. My husband wears them, but they seem pretty interchangeable with the button-ups to me. Certainly you can get both kinds at a range of price points.

Interesting post -- I'd mentally filed this term under "regional."

Where I'm from, NE Indiana, I've heard these shirts called "button-down shirts" or "button-downs" pretty exclusively from the mid-90s on. (Shirts with button-down collars are "button-collar shirts.") I hear "button-down" all over the Midwest. But if I use the term in New York, about half the time people ask me what I mean.