Word of the Week: Dictionaraoke

Dictionaraoke: A musical form in which an instrumental (karaoke) version of a song is accompanied by online dictionary-pronunciation audio files. A portmanteau of dictionary and karaoke, which is itself a portmanteau word. Its literal meaning is "empty orchestra," from the Japanese word kara, "empty," and ōkesutora, the Japanese rendering of orchestra.

Dictionaraoke was invented in 2001 by the Snuggles Collective, which a press release describes as "a diverse group of musicians communicating through the Internet" who were "inspired by the recent addition of spoken word audio clips to the Merriam-Webster and Microsoft Encarta online dictionaries." (The Dictionaraoke logo, above left, and website design appear to owe more than inspiration to Merriam-Webster online.)

I learned about Dictionaraoke on the public-radio show "To the Best of Our Knowledge," which recently devoted an hour to the karaoke phenomenon. Also discussed during the hour: Gomeroke, the invention of The Gomers, "a comedy-rock/experimental music/progressive rock band based in Madison, Wisconsin." In Gomeroke, live music replaces recordings.

Martha Brockenbrough, founder of the Society for the Promotion of Good Grammar, responded to my Twitter query about karaoke with a coinage of her own: scary-oke. "You'll know it when you hear it." I asked whether she wanted credit for the word, and she demurred: "It just describes the way I sing." Nevertheless, well played!

Finally, I spotted this sign in the window of the gym around the corner: 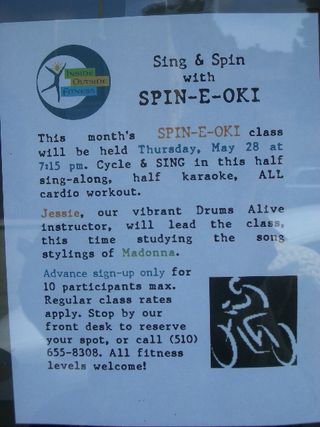 UPDATE: I just learned about Whuff-aoke, a "karaoke across America" tour to promote The Whuffie Factor, a new book by San Francisco community-marketing consultant Tara Hunt.

UPDATE #2: James Callan (again) alerted me to stripparaoke, which James says "was apparently in vogue in Portland [Oregon] for a while."

For the curious: The first karaoke machine was developed in the 1970s by a Japanese musician, Daisuku Inoue, who never patented his invention. The true spread of karaoke is credited to a Filipino inventor, Roberto del Rosario, who patented his Minus-One machine in the 1980s. More information here.

Posted at 07:06 AM in Dictionaries, Film, Japanese, Music, Portmanteaus, Word of the Week | Permalink

He didn't patent it, but received recognition for his work towards a better world by being awarded the Ig Nobel Prize for Peace in 2004. http://improbable.com/ig/ig-pastwinners.html#ig2004