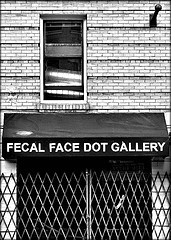 I've written in the past about names so deliberately provocative that they cross the line from amusing to retch-inducing. Chicken Poop lip balm. MomSpit cleaner. Alligator Poo lollipops.

I thought I was inured to the gross-out factor. But that was before I encountered Fecal Face Dot Gallery.

I learned about Fecal Face just a few days ago, although the name has been around—originally as a 'zine, then as a website—since 1998. The physical gallery, in San Francisco's Hayes Valley, on Gough near Market, opened in February 2008. And even though I'm interested in art and the gallery scene, I've somehow missed the reviews of FF shows in mainstream publications like the San Francisco Chronicle; the San Francisco Bay Guardian (a long-established, no-longer-"alternative" weekly), and the local public-broadcasting station's arts page. If reviewers offered any commentary on the gallery's name, it was brief. "Unusual," wrote one. "Quizzical," said another, possibly meaning "puzzling" or even "quixotic".

Because it is a puzzlement. As an institution, Fecal Face is seriously committed to art and artists. Here's how it explains itself on the Info page:

Fecal Face is a content-rich, comprehensive, multidisciplinary art and culture website supporting the art scene in San Francisco and beyond since 2000. The site greets between 11,000-13,000 visitors a day, occupying a unique niche online and in the "real world," by chronicling and shaping the contemporary arts scene in the SF Bay Area and beyond. Visitors to Fecal Face find photo rich features including artist interviews, studio visits, blogs by prominent artists and personalities, an hourly updated news section and coverage of current art openings. Additionally the site supports a forum board with over 2000 users, a comprehensive creative jobs database and an events calendar offering some of the more obscure attractions in San Francisco, Los Angelos [sic] and New York. It's helped launch the careers of many a creative, and catalyzed a community of artists working in various mediums from around the globe.

Moreover, you can't accuse Fecal Face of not maintaining brand consistency, albeit whimsically. (Some might say "sophomorically.") One of the website's main tabs is called "Fecal Stuff." The "Good Stuff" section is explained as "reviews of the good crap you send us." Mouse over the "Blog" tab and read this pop-up text: "The word is a combination of 'web' and 'log.' Spider turds!" The technical editor is listed on the Info page as "Poo." (UPDATE: Commenters point out that "Poo" is the name of Trippe's cat.)

Then there's the "dot" in the gallery name. It's a wink to its online predecessor and to everything dot-com that rose and fell between the 'zine era and now.

But why and whence "Fecal Face"?

Founder Jason John Trippe hasn't provided many clues. (Nor did he respond to an e-mail I sent to the gallery, asking for information about the name.) In February 2008 he told Tyler Callister of the Bay Area ArtQuake blog that when he started the 'zine, at age 22, "Fecal Face" just sounded funny. "I didn't think the site would grow to what it's become," he told Callister. "At times I considered changing the name and then I'd be like 'ah whatever.' Now it's just the way it is."

Yes, I wonder whether Trippe was fecal-faced drunk when he got that particular brainstorm. I also wonder what his runner-up names were. Did he arrive at his final selection by process of elimination?

But what's truly amazing is the nonchalance with which the name appears to have been accepted. How cool does one have to be not to gag or giggle at this name? Obviously, cooler than I am. I'd have a hard time not stammering if I tried to recommend a show at Fecal Face to a friend. Maybe I'd give "Fecal" a vaguely European pronunciation. Feh-CALL, darling: it's divine!

On the other hand, it's not much of a stretch to imagine Marcel Duchamp and his fellow Dadaists roaring with laughter around the giant urinal in the sky. "Fecal Face?" Marcel says, wiping his eyes and gasping for air. "It's the shiznit!"

UPDATE, June 23: The gallery finally responded to my email with a cheery note—"This should answer your question!"—and a link. I remain unconvinced.

You'd think something called Fecal Face would refrain from using the phrase "content-rich."

It is a fine name if you want to telegraph the idea of crappy work or drunken artists. Or perhaps it's about lowering expectations so that things turn out better than anticipated.

"Did he arrive at his final selection by process of elimination?"

Funny line! I've ended up on the Fecal Face website several times over the years. It always strikes me as an interesting hub with a wide range of art stories. The name makes me neither gag nor giggle, which is probably down to several factors.

"Fecal Face" is a crude name, but its alliteration lends it euphony if you're not caught on its denotation. Whether equanimity is the source of the "cool" you mention depends on what you mean by "cool"; to me the word has several meanings, some of which have contradictory connotations. Context usually makes it clear, but I want to allow for a possible transatlantic disparity!

Another possible reason I don't mind "Fecal Face", this one more speculative, is that I was inured to the sound of the word from an early age, because Feakle is a townland in County Clare in the west of Ireland. (There are several theories about the origin of the place name.)

the name's john trippe and 'poo' is his cat. next time i'd do more homework before you blog. (not that getting the name of the owner/creator of ffdg should be much of a homework assignment since it's all over the site...)

Spend a little time and you might even find out that poo is a cat and john is his name...nice work, nicki. you've got a bright future!!!

hey nancy...cheers on developing a new name for the subject of your post. research, how sophomoric.