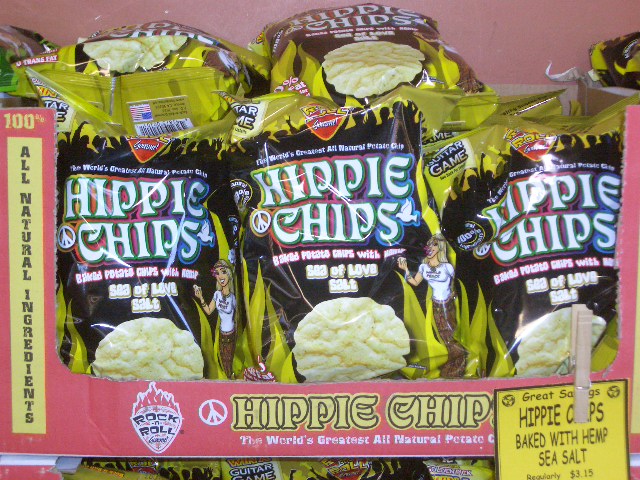 Full of crunchy hempen goodness and ... uhhh ... I forget.

Hippie Chips are manufactured by Rock-n-Roll Gourmet ("For the Rocker in You!"), which was started by musicians Dean and Jan Ehrlich. Besides Sea of Love Salt, they're available in Haight AshBerry Jalapeño, Memphis Blue Barbeque, Lime Is on My Side Cracked Pepper, White Room Cheddar, Woodstock Ranch, and Chive-Talkin' Sour Cream.

I'm the guest blogger today at Duets Blog, a very fine collaborative blog that bridges the gap between brands and trademark, creativity and the law. Naturally, my subject is naming—specifically, the role a name plays as the title of a brand's story. Check out my post, and while you're there spend some time reading the many other interesting posts on topics as wide ranging as Michael Jackson ("The King of Pop's Most Recognizable Trademark?") and the trend toward single-letter naming in the hotel industry.

Thanks, Duets Blog, for the opportunity to share my thoughts on naming with your readers!

Besides being a very naughty governor, South Carolina's Mark Sanford turns out to have a penchant for purple prose, as evidenced by his email correspondence with his Argentine inamorata. Here, from July 10, 2008, is one of the juicy bits:

However, I was drawn to a more banal sentence in the same email. See if you can figure out why:

Tomorrow night back to Philadelphia for the start of the National Governor’s Conference through the weekend. Back to Columbia for Tuesday and then on Wednesday, as I think I had told you, taking the family to China, Tibet, Nepal, India, Thailand and then back through Hong Kong on world wind tour.

It was the last three words that blew me away: "world wind tour." This apparent conflation of "world tour" and "whirlwind tour" turns out to be not a Sanford original but a fairly common eggcorn: a mis-heard term that's assigned a creative spelling (and definition too, usually). The Eggcorn Database lists six citations of world wind for whirlwind, and they're probably just the tip of the cyclone.

For the record, a whirlwind is "a small rotating windstorm" or, metaphorically, "a confused rush." Adjectivally, as in a whirlwind romance, it means "fast-moving" or "tempestuous." One of the most famous whirlwinds appears in Hosea 8:7: "For they sow the wind and they shall reap the whirlwind."*

Eggcorns are usually created when words are learned by ear rather than by reading. But amazingly, some people are capable of getting it wrong even when they know (and see!) the source of the phrase. Here's reader SilverHawk confidently and erroneously answering a question submitted to The Phrase Finder in which whirlwind is spelled correctly ("I was just hoping to find out the origin and meaning of the saying which goes something like 'sow the wind; reap the whirlwind'"). SilverHawk's spelling and punctuation sic:

this is a biblical verse "those who sow the wind shall reap the worldwind" it means that that those to sow little seeds of evil (wind) shall eventually have to harvest the entire crop of damage (worldwind). simillar in meaning to "what goes around comes around." but with a warning that it comes back multiplied. it may seem insignificant at the time of sowing (e.g. gossip/rumour) but it can grow into a full blown worldwind which will eventually distroy all including the sowers.

NASA, by the way, has created a downloadable open-source tool called World Wind that "lets you zoom from satellite altitude into any place on Earth." Perhaps Gov. Sanford should use this World Wind, from the comfort of his den, the next time he gets a whim to hike the Patagonian Trail.

Word of the Week: Couplecore

THE ROSEBUDS (Sunday) It’s been called “couplecore”: indie-rock bands centered on a romantic pair. Over nostalgic synth-pop, Ivan Howard and Kelly Crisp of the Rosebuds mix mushy sentiments with thoughts about adult responsibilities and the long challenge of staying happy together.

The -core suffix comes from the vocabulary of movies (hardcore, softcore); it recently spawned mumblecore. It has migrated successfully to music, thanks to the naming of genres such as "hardcore punk." In addition to couplecore, see nerdcore, metalcore, and grindcore.

From the BBC this morning, news of a lucrative merger that has yielded the year's most unfortunate name:

The new firm, to be called Nigaz, is set to build refineries, pipelines and gas power stations in Nigeria.

Gazprom probably pronounces it NIGH-gahz. As if sounding pretentious when you're being offensive makes everything cool.

Do I have to repeat myself? Step away from the portmanteaus, people. Nine times out of ten, they'll just embarrass you. At the very least, peel off a few Benjamins from that stack of billions and hire a consultant familiar with Urban Dictionary.

Thanks to PopeHat for the tip. And kudos to CatchThis, the naming blog (right here in O-town), for its apt response:

YO! Gazprom! I don’t mean to be dissin’ ya’ll, but Shizzle! What the hizzle??? Nigaz??? I might just have to shoot the five witcha, or at least sick [sic] the naming po-pos on ya. Again: Nigaz???? Have you NO skrilla to do some of that linguistic or cultural screenin’??

Honestly, I didn't intend to renew the lease on this Simpsonian extravamaganza. But then I stumbled upon a new! improved! interactive! map of Springfield with a bunch of brand names I hadn't known about, so here I am again with a new slew of fictitious brands from the longest-running prime-time show on American TV.

If you're just joining us (an example of the relevance conditional, I've learned from Language Log), the original inspiration for this series came from linguist Heidi Harley, who has published an annual Simpsons linguistic joke collection since 2005. If you crave more Simpsons brand nonsense, please to check out Brand-o-Rama 2007 and Brand-o-Rama 2008. And if you still haven't spotted your own favorite Simpsons brand, won't you leave a comment and let us know about it?

The basics: Dates, when provided, refer to original broadcasts. I've watched most but not all of the episodes, including most of the current (20th) season, but couldn't confirm all references because there's a significant lag between air dates and DVD releases: the most recent DVD (2008) covers the eleventh season, and the twelfth-season DVD won't be released until August 2009.

However You Slice It

Pizza Hut has introduced a new sub-brand, or at least a new logo, along with new red pizza-delivery boxes:

The company's chief marketing officer, Brian Niccol, told Brandweek in March that the red box "is a game changer in packaging and design." That's how CMOs talk, you know. Niccol also said:

And yes, we're also introducing another vocabulary word with Pizza Hut, which is 'The Hut.' That ties in nicely with [today's] texting generation. We wanted to make sure that Pizza Hut and 'The Hut' become common vernacular for our brand. Red is our mark and when you see that red roof, people will refer to it as 'The Hut' or 'Pizza Hut.' As we expand our online and mobile businesses, 'The Hut' is the perfect icon for our mobile generation.

"Introducing another vocabulary word"? Which word would that be, Mr. Niccol: The? Or hut? Because I'm pretty sure hut has been around since, oh, the seventeenth century, and the even longer.

Then there's the obligatory kowtowing to "[today's] texting generation," a k a young whippersnappers. "Again with the texting!" Ben Zimmer, executive producer of Visual Thesaurus, wrote in an e-mail to me. "That's the same rationale they used for Syfy"—the recent renaming of the SciFi Channel.

PizzaHut, however, is taking pains to let us know that this doesn't represent a name change. PizzaHut.com says on its home page: "Pizza Hut is not changing its name. We are proud of our name and heritage and will continue to be Pizza Hut. We do use 'The Hut' in some of our marketing efforts."

As Econsultancy observed on Monday:

A red box and a "vocabulary word" are not going to change the fact that consumers are not consuming as much pizza. Same-store sales were down for Pizza Hut in the fourth quarter of last year. And while the company has started using "The Hut" phrase on its printed materials and storefronts, a quick name change isn't going to fix that problem.

"We think that 'The Hut' is to Pizza Hut as Coke is to Coca-Cola," Fuller said. "We have begun using the term in conjunction with Pizza Hut in our advertising, pizza boxes and some restaurants."

To my surprise, Armin Vit of Brand New, an authoritative identity-design blog, said he doesn't "mind" the new design direction. I'm not a graphic designer, but I find the font ugly, the underscore awkward, and the shadow-lines (do they have a technical name?) distracting. And the dumb Borsalino-fedora icon remains as dopey as ever. Do they want people to refer to the chain as The Hat?

Or are they thinking about something else altogether? In that case, you might want to brush up on your Huttese.

Word of the Week: Ghillie

By extension, a ghillie is also a lace-up shoe of the type worn by Scottish and Irish dancers... 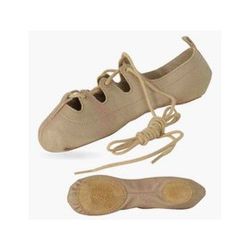 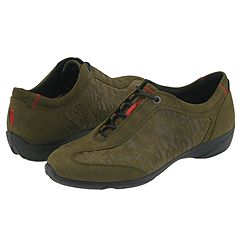 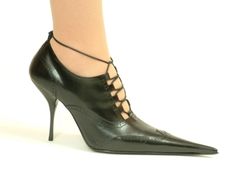 But when you Google "ghillie," the first and most abundant results are for ghillie suit, a type of camouflage worn for centuries by hunters, soldiers and, more recently, paintball enthusiasts.

Any resemblance to Chewbacca, a Yeti, or Birnham Wood come to Dunsinane is probably intentional.

My favorite take on the ghillie suit is this artist's interpretation, a colorful homage to IKEA (video).

BldgBlog, a serious blog about architecture and landscape, recently published a post about ghillie suits that includes many wonderful photos and this rumination:

Whatever you might think of wildlife slaughter ... how unbelievably interesting would it be to get Ghillie suit designers, deep wilderness hunters, and some landscape theorists together for a long afternoon of spatialized discussions. Throw in some anthropologists studying hunter-gatherer tribes and maybe some military camouflage field testers – and, at the very least, you've got yourself an interesting book proposal.

My thanks to graphic designer, illustrator, and fine artist Susan Bercu, who discovered the Urban Camouflage video and introduced me to the wide world of ghillie suits.

You're walking through Oakland's "Uptown" (formerly Downtown), where retail is scarce and often sad. (Example: the "Wig's" store.) As you round a corner near the 19th Street BART station, the sight of this window brings you to a confused halt. 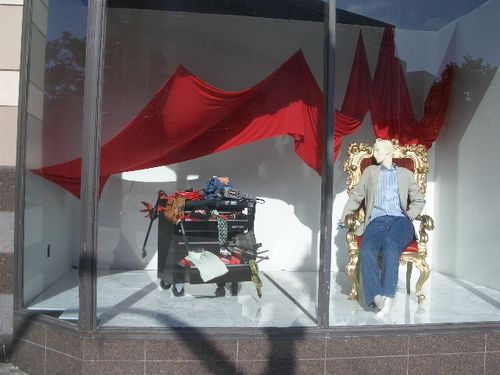 What. The. Hell?
Questions tumble through your head. Did you miss the grand opening of some too-cool-for-school boutique from Manhattan's Meatpacking District? Is the display a contender in a new "Pimp My Store Window" reality show? Did the gang from Fecal Face Gallery stage a stealth installation?

You check out the details: Rococo chair. Bare feet. Ill-fitting clothes. Randomly draped red fabric. No hands on the mannequin. 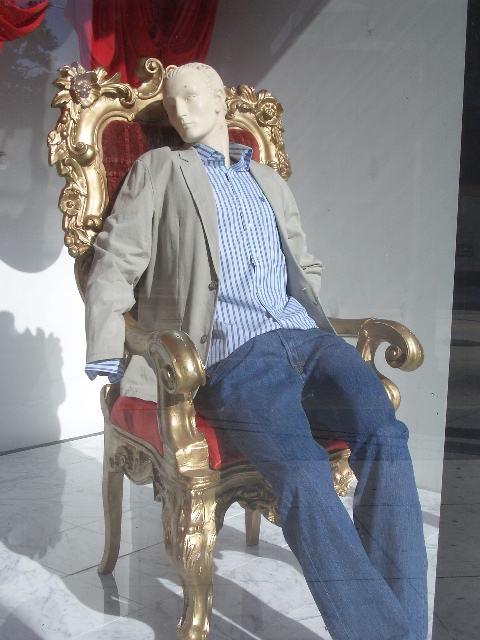 "I have no hands, and I must scratch."

And all that ... stuff spilling out of the toolbox. 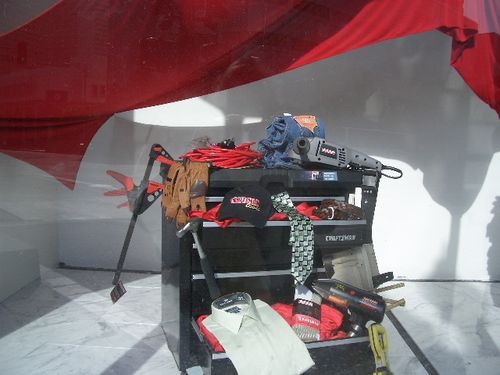 Which means we could be at only one store: 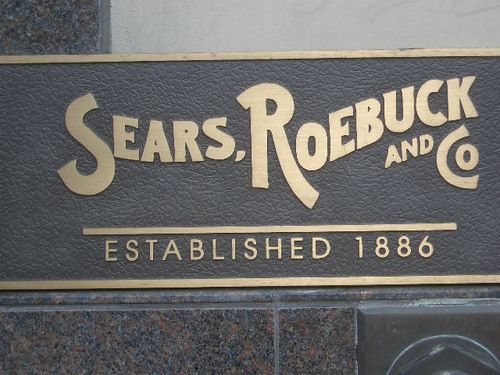 Yes, my friends. The Oakland Sears, Roebuck and Co.—purveyor of fine Craftsman tools and sturdy Kenmore appliances—has gone all ironic/conceptual/surreal for Father's Day. Or run out of money. Or lost the will to live.

Have a happy holiday, all you dads. Shop locally!

This may be the saddest brand name in the world. 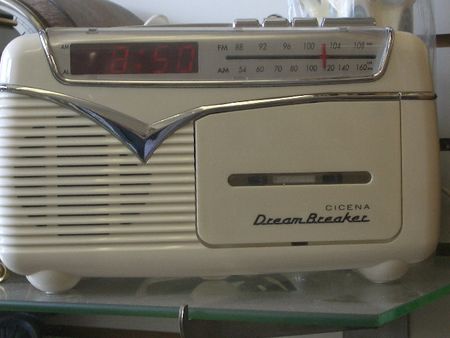 Manufactured sometime in the 1950s, from the looks of it.* Spotted on the shelf at Jacob's Clock and Watch Piedmont Avenue, Oakland.

* Except for the digital clock, as several of my Twitter followers pointed out. My attempts at online research were fruitless; anyone have the scoop on this radio's provenance (Italian?) and age?