Word of the Week: Tabloid 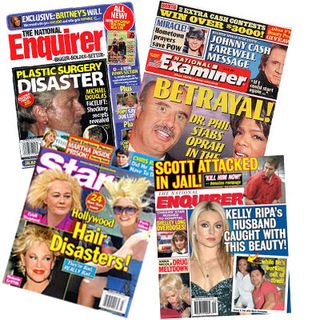 Tabloid: A reduced-format newspaper, generally half the size of a traditional broadsheet paper, that opens like a magazine for easier reading on buses and subway trains. Introduced in the late 19th century in England and the United States, tabloid newspapers quickly became known for their sensational content. Tabloid is often shortened to tab.

So far, so familiar, at least for this lapsed journalist. What I hadn't known was that tabloid derives from an old trademark for a pharmaceutical brand. Ralph Keyes enlightened me in his recently published book with the excellent title I Love It When You Talk Retro: Hoochie Coochie, Double Whammy, Drop a Dime, and the Forgotten Origins of American Speech:

At first readers didn't know what to call this compact type of newspaper. By analogy it resembled a kind of compressed medical pill introduced in 1884 by Burroughs, Wellcome. That pharmaceutical company called its new product line Tabloid. It didn't take long for this term to be applied to any compressed item, including the vertical-fold newspaper format pioneered by London's Daily Mail and New York's Daily News. Because tabloid newspapers tended to emphasize sensational news coverage, their name itself came to signify that style of reporting.

Wellcome strived [sic] to come up with an original, catchy word to describe Burroughs Wellcome's new compressed medicines: “I wanted to coin some word that would be euphonious that is something that would be pleasing to the ear, that would be easy to remember”, he would later write. Inspiration struck early one morning in 1884: after passing through his mind combinations of letters and syllables, Wellcome hit upon tabloid—a combination of two words: tablet and ovoid (although some sources claim alkaloid). Wellcome quickly registered his invented word as a trademark to describe his company's products.

(The -oid suffix comes from Latin oides, adapted from Greek oeides, "having the likeness of." It's a remarkably productive morpheme whose children include trapezoid, asteroid, thryoid, humanoid, adenoid, android, steroid, and factoid. The last word was reputedly coined by Norman Mailer in his 1973 book about Marilyn Monroe.)


A problem arose in the early 20th Century when the term 'tabloid' was first used to describe a shortened form of journalism "with an emphasis on short stories simply told, on sport and human interest topics, and with the innovation of a women's page". In 1903, Burroughs Wellcome sued Thompson and Capper, a Manchester [U.K.] firm, for using the trademarked word 'tabloid' without permission. In their defence, Thompson and Capper pointed out that 'tabloid' was by then widely used and argued Burroughs Wellcome had lost all rights to the term and that they were attempting to prevent the proper development of the English language.

Burroughs Wellcome won the case; but the judge agreed the word had acquired a secondary meaning though stated that this didn't interfere with the firm's trademark rights.

It wasn't the first time Burroughs Wellcome had fought trademark infringement. According to The Lancet, in the 1880s and 1890s the company "wrote to such newspaper barons as Joseph Pulitzer and Alfred Harmsworth to warn against using the word."

Image from How Stuff Works.

Posted at 08:06 AM in Books, Branding, Media, Naming, Pharmaceutical, Slang, Trademark, Word of the Week | Permalink