What, to paraphrase Dr. Freud, does a woman want to wear? Skirt? Pants? Well, how about both! 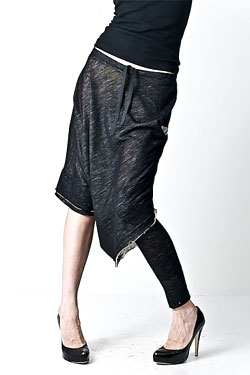 You'd pose awkwardly, too, if you were wearing this portmanteau garment. According to The Cut, New York magazine's fashion blog, a word had to be invented to describe it: It's a spant, as in skirt plus pant. From the description on the Oak Boutique site: "double layer perforated wool jersey gauze asymmetrical culotte with one extra oversized and draped pant and one smaller. internally attached legging with a drawstring closure." If this sounds like the answer to your wardrobe prayers and you wear a size extra-small (the only size remaining!), you can buy it at the marked-down price of $276 and do your part to revive American retail, which from the looks of it is digging its own grave.

(Since it's really a skirt-pant-legging that leaves one lower limb exposed, shouldn't it be called a skipaleg?)

Elsewhere in CoutureLand, this season's skirt-pant hybrid has been called a skant. Scroll down to the Skirts section in this post to see examples of what the blogger compared to "a short dhoti." It's not, however, as short as a skort (skirt plus shorts), an item that's been around since at least the 1950s.

Earlier this year, the house of Yves Saint Laurent offered its own interpretation of the trend, which it called simply "skirt pant." In English, anyway. I don't know what it's called in French—pantajupe? I call it "the $850 diaper." Voilà: 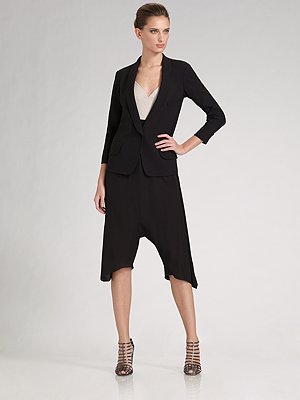 On the plus side: excellent air circulation!

Skirt-pant mashups aren't the only combo garments awaiting deep discounts. "When Trends Collide" is how The Cut headlined a short article about jeggings (jeans that fit as tightly as leggings). They're known in the UK as treggings (trousers + leggings) and are being sold by über-hot retailer Topshop for £28 to £40 (about $43 to $62).

Attention, gentlemen: Snicker all you like, but don't think you're exempt. Today's New York Times Thursday Styles features a story about designer shorts for men with price tags of $465 and up. Among the options is Thom Browne's seersucker man-skort, "which, at $1,495, could make you rethink the derivation of the name of said fabric." (Did you think we'd seen the last of the man-words? Ha, and ha encore!)

Thom Browne, for those who don't study Details and GQ, is the designer who popularized "poindexter chic," i.e., high-water pants that expose sockless feet shod in clunky brogues. Ever on the bleeding edge, Browne is currently proposing a skirt suit for men. It's yours for the marked-down price of $1,288. I double-dare you.

For a consideration of portmanteau beach fashion, see my 2008 post on the skirtini and its -kini kin: tankini, monokini, and more.

Posted at 09:54 AM in Fashion, Man-Words, Portmanteaus, Words | Permalink

Call me silly, but I thought these days designers wouldn't try this. I double dare them to stay in business.

Photographic evidence that someone is gullible enough to affect the $850 diaper look: http://gofugyourself.celebuzz.com/go_fug_yourself/2009/05/boom_boom_fug.html#more