Tremble in awe before the Shiva sandal from German shoemaker Think! (exclamation point theirs): 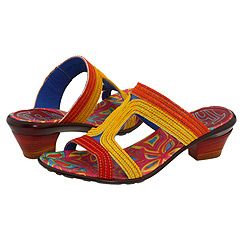 It's awfully festive for the seven-day Jewish period of mourning.

And it doesn't look like anything the Hindu god Shiva (the Destroyer of the World) would be caught reincarnated in.

Shoe-style names often exist in a parallel universe governed by designers' egos and littered with zany mis-translations. Readers of this blog may remember the Stupa (which bore the name of a Buddhist tomb), the Weirda (a decidedly un-weird, indeed pedestrian slip-on), and the Nervous (a driving shoe!).

So, sure, there's plenty of precedent. But I still think Think! should have thought twice before choosing this name. The shoe may fit, but the name doesn't.

P.S. None of this commentary is meant to disparage the quality of Think! shoes, which in my experience is superb. I do, however, have another complaint about the company's nomenclature. Think! assigns a word name to each last (the shape on which the shoe is built) and a frustrating five-digit string of numbers to differentiate style variations. This particular Shiva sandal, for example, is actually the Shiva 82523. Then there's the Julia 82337, the Julia 82340, the Julia 82330, and so on. This naming convention may be useful within the company (I'm guessing the first number is a seasonal code), but it's mystifying, memory-defying, and pointless for customers.

Great series of posts you've got going here, Nancy. On the topic of bad shoe names, let's not forget the Reebok Incubus: http://www.nytimes.com/1997/03/02/business/after-tripping-on-its-laces-reebok-is-focused-again.html?pagewanted=all

Using a word with such direct religious meanings is just asking for trouble! A German company naming a sandal after a Jewish time of mourning? It's hideous. I like the word you used to describe the sandals. Think might have thought to use, "festive" as its starting point for a name.

But, but ... they're so freakin' cute. If I promise to call them something better, may I buy a pair?

14% of the world practices Hinduism; 0.22% practice Judaism (an estimate of 900 million vs 14 million) according to www.adherents.com. But given they are hq'd in Germany, you'd think someone would have thought about it.

On the other hand, I buy lots of things called "Wake" that have nothing to do with Irish funeral practices.

@TheNameInspector: Yes, Incubus remains one of the low points in consumer brand naming, years after it went down in flames. (Since it was a women's style, shouldn't it have been the Succubus?)

Everyone else: I shouldn't assume that you're as obsessed with shoe marketing as your humble blogger. For the record, a shoe-style name does not appear on the shoe itself, except (sometimes) on the sole, in a retailer's removable tag. (Nordstrom is one such retailer.) The name does appear on the shoe box and in catalogs and websites such as Zappos. A style name is useful for identifying a shoe you're trying to track down or re-order; it generally has little to do with a buying *decision.* But it *is* part of the designer's overall brand impression.