« Inconceivable! | Main | How Zafgen Got Its Name »

Word of the Week: Nom

Nom: Slang term, widely circulated through blogs and Twitter, that simulates the sound of eating enthusiastically. Frequently repeated as an interjection ("Cookies! Nom nom nom"); also used, by extension, as a verb ("I'm nomming on some yummy cookies") and an adjective ("Those cookies are nommy!"). Urban Dictionary identifies other builds on nom, including nomilicious, nomable, nomtastic, nommage ("something good to eat"), and nomability. However, nomosexual has a different etymology; it's defined as someone uninterested in sex ("no mo'").

The gustatory nom is attributed to the Sesame Street character Cookie Monster (1969-present), who says "Om nom nom nom" while eating omnivorously. In the last couple of years nom has been widely disseminated through the medium of LOLcats; it's defined in a LOLcat Dictionary as "to eat fuds."

Here is an unusually sophisticated (and bilingual) use of nom in a LOLcat photo (from I Can Haz Cheeseburger): 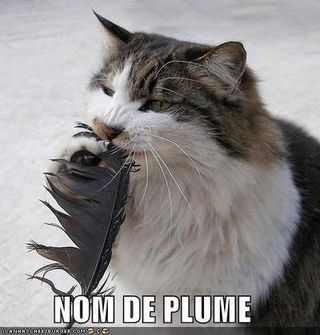 Perhaps inevitably, there have also been sightings of Obama noms.

Following the recent legalization of same-sex marriage in Iowa and Vermont, another nom has been audible: NOM, the National Organization for Marriage, which purports to "protect marriage and religious liberty." On Twitter, the organization's handle is nomtweets, which has caused some confusion and annoyance among the nom-as-fuds crowd. "TAKE BACK THE NOM," tweeted Washington reporter Ana Marie Cox on April 10, endorsing another tweet that commented: "It's sad that the Right has appropriated our most adorable netspeak for their hate campaigns." Capital-letter NOM seems to exhibit a tone-deafness similar to that of other right-leaning causes: its newest initiative is called 2M4M, an abbreviation of "Two Million for Marriage." Apparently no one at NOM did the minimal research necessary to discover that M4M is a long-established (pre-Web) gay-personals-ad abbreviation of "Men for Men."

The acronym NOM can also be an acronym for No Offense Meant, Natural Organic Matter, and many other phrases. In French, perhaps needless to say, nom means name.
UPDATE: Watch a spot-on parody (from "RIM") of the National Organization for Marriage's alarmist "Gathering Storm" video.

Posted at 07:18 AM in Acronyms, Slang, Television, Web/Tech, Word of the Week | Permalink

Before I saw the cat, I was thinking "plume." Seems Photoshop editors and I think alike.

@Duchesse: Thanks for that wonderful visit to Peter Sellers-land.