« Debunking the Myths of Naming | Main | Is This Thing Working? »

Ms. Dowd Interviews the Inventor of the Telephone 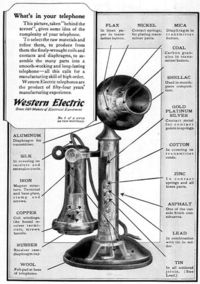 SAN FRANCISCO -- I was here on a simple quest: curious to know if the inventors of Twitter were as annoying as their invention. -- Maureen Dowd, "To Tweet or Not to Tweet," New York Times, April 22, 2009.

BOSTON --Edgar Allan Poe would love Alexander Graham Bell's workshop here. Pendulums, buzzers, and ticking sounds everywhere, with a mysterious note to the chambermaid in crabbed script. In a droll nod to shifting technologies, there's an 18th-century ear trumpet on the settee, where Mr. Bell evidently left it while in a fog of inventive absentmindedness.

I was here on a simple quest: curious to know if the inventor of the telephone was as loud, intrusive, and soul-destroying as his invention.

I sat down with Mr. Bell, 39, and his assistant Thomas Watson, 22, and asked them to explain why they shouldn't be condemned to a slow, painful death.

ME: The telephone seems like letter-writing without the paper and pen. Is there any message that can't wait for a passenger pigeon?

BELL:  Possibly the message I'd like to deliver to you right now.

ME: Did you know you were designing a toy for bored housewives and the indolent rich?

BELL: Actually, I was trying to help deaf people.

ME: I heard about a woman who telephoned her husband to say she was in the throes of childbirth. Whatever happened to private pain?

ME: Why did you think the answer to telegrams was a noisy new telegram?

BELL: We have designed the receiver so you can leave it off the hook.

ME: Why did you call it a "telephone"? That's Greek! Isn't English good enough for you?

BELL: We tried calling it the FarSound, but Watson turned it into a rude joke.

ME: Would Shakespeare have "telephoned"?

WATSON: Perhaps not. But we have it on good report that Abraham Lincoln would.

ME: Was there anything in your childhood that turned you into a loathsome scourge to humanity?

BELL: You mean my mother's deafness, which made me dedicate my life to helping people communicate?

ME: I would rather be flayed alive and gradually guillotined than use a telephone.

BELL: Operators are standing by.

This is funnier than the original. Who is that woman and is she on twitter yet?

Maureen Dowd is a vapid twit. No pun intended.

If only she could understand parody.

I thought I'd die, this was so damn funny. Very nicely done!

Take that Dowd! Good one, Nancy.

LOVE this! Now I have something to send my real-life friends who don't (want to) get Twitter.

Oh, thank you for this, Nancy. Exactly the levity that was needed. Wow, is Maureen Dowd out of touch. I mean, you don't have to like Twitter, but to be so incredibly condescending to Ev & Biz! I thought they handled it brilliantly.

As have you! Love this hilarious parody.

You are my hero!

Free speech at glorious work. I don't much like the phone either, but to each his own form of communication. Twitter is deliciously and devilishly brief, but also a playground for the self-absorbed. But no writer, or talker or thinker, for that matter, is not a little bit so afflicted. Self included.

Why is this listed under "Humor"? This isn't even remotely humorous.

Though MoDo would likely confuse them.

Great job. I want to see the next one with inventor of the smoke signal.

FWIW, I'm not 100% convinced that Dowd was intending to come off the way a lot of people interpreted it, though.

Excellent parody of Dowd's snarky interview with Ev and Biz. According to this article on SocialMediaToday http://www.socialmediatoday.com/SMC/88634# "Twitter now beats out the New York Times in terms of traffic."

I guess that explains why Maureen's got her panties in a bunch when it comes to Twitter.

And if she really would "rather be tied up to stakes in the Kalahari Desert, have honey poured over me and red ants eat out my eyes than open a Twitter account", I'm sure there are many offended Twitter users who would be happy to oblige her.

This is truly amazing!!! Who are you, wonderful person?

This really is a brilliant piece.

I've appreciated some of Dowd's musings, but her Twitter article was shockingly off base. As a parody, it's kinda funny, but a serious piece? No way!

Now, if her intention was to get lots of press around this. Mission accomplished :)