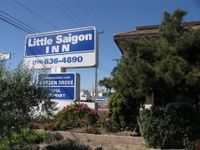 If you don't live in the Bay Area, and specifically in the San Jose area, or if you're not Vietnamese-American, you may not have been aware of this story, which has been simmering for more than a year. Ever since I first heard about it I've been fascinated and baffled. And yesterday's headlines, which appeared to proclaim a resolution to the dispute, didn't clear matters up.

The story is about a fight over a name. Naturally, it's also about more than that.

Here's the background: San Jose is home to the largest Vietnamese-American community in the United States—85,000 people, or 10 percent of the city's population. In November 2007 the San Jose City Council held a hearing to decide what to name the city's Vietnamese business area, a one-mile commercial strip. Eight hundred people showed up. (Take a minute to consider that. Eight hundred people. At a city council meeting.) One one side was San Jose's first Vietnamese-American councilmember, 34-year-old Madison Nguyen, who was born in Vietnam and before running for office taught sociology at a local community college. (The sociology part may be relevant.) Nguyen wanted to name the area the Saigon Business District, and herald it with banners and publicity. Seemed to make sense. It's a business district. Saigon's a city in Vietnam. Nothing remotely controversial about that, right?

Many of the citizens who attended the meeting favored a different name: Little Saigon. For reasons I'm still unable to fathom, to its advocates "Little Saigon" does not sound diminutive or, well, belittling to Vietnamese-Americans; it sounds like a proud anti-Communist slogan. Whereas "Saigon Business District" ... doesn't.

The meeting lasted six hours, and in the end the council voted eight to three for Nguyen's choice, Saigon Business District.

And that was definitely not the last word.

Nguyen's very vocal opponents called her a traitor (yes, that's the word they used) for not backing the Little Saigon name, which they claimed (quoting yesterday's San Francisco Chronicle story) is "part of the ethnic Vietnamese identity in the United States and is used for ethnic business areas around the country." (For an extensive examination of Vietnamese business districts around the country, not all of which are called Little Saigon, see this Wikipedia entry.) One man staged a 29-day hunger strike. Other residents started gathering signatures for Nguyen's recall. They eventually collected more than 5,000 signatures, just shy of the number of votes that had originally put Nguyen into office.

And so San Jose held a special election March 3, at a cost of more than $500,000. Nguyen survived the recall with 55 percent of the vote.

But Nguyen's victory at the polls is also not the end of the story. Here's what an AP reporter wrote yesterday:

"It's not semantics," he said. "It's a term that is used in a lot of Vietnamese-American communities, and stands for a historical connection to the homeland."

Kim Nguyen, a San Jose housewife, was moved to tears when she explained why she worked on the recall campaign, knocking on doors and getting out the vote.

She's not related to Madison Nguyen, and doesn't live in her district, but like the councilwoman and her family, she fled in the wake of Saigon's takeover in 1975 by victorious North Vietnamese communist forces, who renamed it Ho Chi Minh City.

Madison Nguyen could have been her daughter—a wayward daughter that needed to be brought back in line, said Kim Nguyen.

Campaign literature also blamed the councilwoman for an increase in crime, a City Council pay raise and other perceived missteps. But the talk on blogs, in cafes and on community radio centered on "Little Saigon" and seethed with the feeling that Nguyen had turned her back on her base.

Near the end of the article are these sad sentences:

The city has since scrapped its plans for a Vietnamese district. The Little Saigon banners that flutter on San Jose's Story Road are privately funded.

So what have we learned from this contretemps that we can apply to other naming endeavors?

1. Know your audience. It's not enough to be like your market; Nguyen is a Vietnamese immigrant just like her constituents. But she's only in her 30s. If she had talked to the older members of the community she might have hesitated before recommending what turned out to be a polarizing name.

2. Names are more than the sum of their parts. To me, "Little Saigon" sounds mildly condescending. But not to the people who favored it. To them, "little" has a subtext deeper than its dictionary meaning. You'd think a former sociology professor would have been sensitive to those nuances, but she wasn't. When you're gambling on a name, you can't afford to overlook context, history, and emotional resonance.

3. Change is hard. There probably was a way to make "Saigon Business District" more palatable to San Jose's Vietnamese community, but it seems that Nguyen and the other councilmembers didn't make that effort. In my own naming work, I've learned that the name is only the title of the story; how you tell the story determines whether the client accepts or rejects the title.

And finally: Five hundred thousand dollars? There has to be a better solution.

Posted at 10:31 AM in Naming, Politics | Permalink

I've never heard a name for Chicago's Vietnamese zone. From the Wikipedia article on "Little Saigon":

Argyle Street in the city of Chicago contains a Little Saigon district, and it has become the hub of vibrant Vietnamese culture in the city. It is referred to by Chicagoans as the "New Chinatown." "New Chinatown" is easily accessible from the CTA's Red Line Argyle stop.

To me, "Little Saigon" sounds mildly condescending. WHY?

There's "Little Italy" in Boston, it's like saying Chinatown or something. Little Saigon was the perfect word. Madison missed the boat on this one. I think you did too.

The "Little" is a convention here in Toronto: Little India, Little Italy, Little Malta. (Toronto is the most multicultural city on earth.) "Little" connotes the wish to replicate a slice of home. To me, the "town" suffix is more condescending, as in "Chinatown". It's also what works, "Saigontown" does not.

Business District is an unappealing and leaden term; it doesn't attract people. Can you imaging someone saying, "Let's have fun today and shop in the Saigon Business District?"

@Emilia and @Duchesse: "Little X" is a convention in many cities. It's my understanding that "Little Italy," in particular, originated as a perjorative term applied by non-residents to a part of town they considered "foreign." (Remember, there was a time when Italians and Jews were considered "non-white" and subject to terrible discrimination.) It was appropriated by residents, and became a term of pride, only with the passage of time.

My point in this post was not that "Saigon Business District" is worthier than "Little Saigon"--I think it's a bland choice at best--but that *any* name is capable of inflaming such intense passions. (A 29-day hunger strike?!) I also wanted to point out the importance of understanding cultural constructs and signifiers before undertaking a naming exercise.

Keep in mind, too, that in cities like Toronto and New York "Little Italy" is or was a residential neighborhood. That's not true of San Jose's Story Road commercial strip: Vietnamese-Americans live in neighborhoods throughout the city; this one-mile strip is a business district only, lacking the heart-and-home resonance of a true "Little ___."

The controversy also strikes me as a bit anachronistic. The current trend in neighborhood naming is compressed forms: SoMa and NoPa in San Francisco, TriBeCa and NoLiTa (North of Little Italy) in New York. Maybe San Jose will eventually come up with a similar solution that appeals to young, hip residents of Vietnamese descent: LaVie? SaiJo? Or maybe the city will capitalize on the possibilities inherent in "Story Road": "Saigon Story," anyone?

It is not a pejorative here, and I'd say let's ask my dearly departed friend Jane Jacobs, but we're too late. Few customers are going to be attracted to a "business district" name for a neighbourhood, so I agree a SaiJo type name might be better.

@Duchesse--I sent an inquiry to Barry Popik, whose Big Apple website (www.barrypopik.com) is an excellent resource for all things New Yorkish. He has an entry on Little Italy, but it doesn't include the term's origin and whether it was considered pejorative at the outset. Here's the relevant part of his response to my email:

>>I reviewed several 1880s citations. It's difficult to tell; perhaps I'd have to look at Italian newspapers to get the full story. However, I don't see a pejorative use.
...
>>"Chinatown" was used since the 1860s, used first in San Francisco.
...
>>"Kleindeutschland" (Little Germany) was used in New York City, also in the 1880s. This is a German term used by the Germans themselves; it was not pejorative.
...
>>Keep in mind that New York City had several Little Italys; the one in Harlem was just as well known as the one on Mulberry Street is today.
...
>>It cannot be known who the first person was who came up with "Little Italy," and what his or her intent was. As with Kleindeutschland, Little Italy appears to be a term that was used by both insiders and outsiders, and was never an insult.

--
So I stand corrected, at least for now. But I'd love to know whether anyone has additional information on the subject of possibly demeaning ethnic toponyms.

Not to keep flogging this, but I keep thinking about the "anti-Communist" argument. If you want to present yourself as a proud capitalist, doesn't "business district" do the job better than "Little Saigon"?

Baltimore's "Little Italy" has, to my knowledge, always been known by that name, and not as a pejorative. It is both the heart of the Italian business district and a stable residential neighborhood. BTW, the Speaker of the House grew up there; her father and then her brother were extremely popular Mayors.