The Dynamic of Perimeter Oscillations: How the New Pepsi Logo Was Sold

This is the sort of thing that gives branding a bad name.

Remember the new Pepsi logo I wrote about last month? Fast Company now shares a leaked 27-page design brief (PDF) that explains the thinking, if you can call it that, behind the logo change. I can't put it any more succinctly than FC does: "It may be one of the most ridiculous things ever perpetrated by somebody calling himself a designer."

The presentation, by the Arnell Group (also responsible for the botched design of the Tropicana orange juice carton) contains visual representations of and comparisons with the following: the golden ratio, the Mona Lisa, the Parthenon, the Gutenberg Bible, the earth and its magnetic fields, and the solar system/universe. None of these things have anything to do with soda.

It gets worse. The brief is full of misspellings ("ration" for "ratio"; "aesteticism" for "aestheticism"), poor grammar ("Magnetic field are impacted by sun radiation and wind motion"), and bafflegab:

"The vocabulary of truth and simplicity is a reoccurring phenomena [sic] in the brand's history."

"The Pepsi DNA finds its origin in the dynamic of perimeter oscillations."

"Emotive forces shape the gestalt of the brand identity."

"A sphere is defined as the surface formed by rotating a circle around any diameter."

"Establishment of a gravitational pull to shift from a 'transactional' experience to an 'invitational' expression."

And then there's this, which is just boggling: 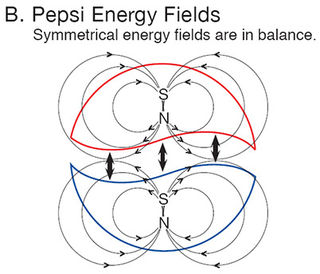 And yet ... not a word about the Obama campaign logo that the Pepsi design so obviously resembles (or rips off).

I thought Arnell Group sounded familiar. Turns out I'd written about them a year and a half ago. Apparently their jargon generator is still humming away. All too successfully, I regret to report.

UPDATE: Steven Heller critiques Arnell's redesign of the Tropicana package: "Give me a sun-soaked orange over a Crate and Barrel juice glass anytime."

One is struck speechless.

What's really great is that the Arnell home page still has the same crap it had 18 months ago when you looked at it, complete with "Please excuse us while our website is under construction." Who would hire them?!? Besides Pepsi, I mean. I guess if you're looking for someone to "execute across every consumer and trade touchpoint," Arnell's the group to go with.

after a year-and-a-half the group's web-page is still under construction. they must be distracted... by the gravitational pull of their intense sucking.

Ye gads. Please don't tell me what Arnell was paid for this tosh fest.

@Tracey: "Pepsi would not discuss what it's paying for the revamp, but experts estimate the cost for a top firm to work five months at north of $1 million." - Advertising Age, Oct. 27, 2008.
http://adage.com/article?article_id=132016

I wonder if Arnell tracked how much of that budget went into actually designing the logo versus how much was spent on the presentation to sell it.

Peter Arnell is evidently one of Martha Stewart's BFFs, since he has appeared on her TV show many times, displaying his various collections. He reminds me of the character "Sanjay" from the CBC series "Slings and Arrows" (Sundance Channel), and this latest effort only reinforces that image.

Thanks, Nancy, for this post. My jaw hasn't dropped this far this fast in a while.

I thought Korean Airlines had merged with Pepsi and Pepsi adopted the KAL logo.