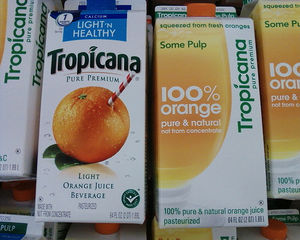 A couple of weeks ago, in an update to my post about the new Pepsi logo, I mentioned the new Tropicana logo and packaging, designed by the same agency that did the Pepsi work. (PepsiCo owns Tropicana.) "What could Arnell ... have been thinking?" wrote designer/critic Steven Heller. "It's one thing to change the logo; it's another to abandon the mnemonic orange with the straw in it."

Well, Heller wasn't the only one raising hell. The New York Times reports today that Tropicana

is bowing to public demand and scrapping the changes made to a flagship product, Tropicana Pure Premium orange juice. Redesigned packaging that was introduced in early January is being discontinued, executives plan to announce on Monday, and the previous version will be brought back in the next month.

Old and new versions shown above.

Here's the part where my jaw dropped. For reference, "Mr. Campbell" is Neil Campbell, president of Tropicana North America:

It was not the volume of the outcries that led to the corporate change of heart, Mr. Campbell said, because “it was a fraction of a percent of the people who buy the product.”

Rather, the criticism is being heeded because it came, Mr. Campbell said in a telephone interview on Friday, from some of “our most loyal consumers.” “We underestimated the deep emotional bond” they had with the original packaging, he added. “Those consumers are very important to us, so we responded.”

Now, I don't work for a big consumer-products company or a fancy agency, but I know this about branding: Never, ever underestimate the emotional bond. Because branding is all about the emotional bond. Before you start redesigning logos and packages (or changing brand names, I am compelled to add), you absolutely must find out what your customers think and feel about your product, its packaging, and your message. And if they tell you, "Don't take away the orange with the straw!" you'd better be able to explain why you didn't listen to them.

This is not the same thing as conducting focus groups, by the way. For the record, I think focus groups are mostly a waste of time, a bit of theater to impress the big bosses. People in focus groups feel all kinds of pressure to tell you what they think you want to hear or—sometimes—to say they hate everything, just to be obstructive.

No, what I'm talking about is before-the-fact research, so that you don't end up spending a million bucks, or more, making your customers hate you.

But designers and agency execs are often too obsessed with winning awards, and in-house brand managers are trying too hard to impress the big bosses (see above) to concentrate on what should be their top priority: What do our customers like and want? And the corollary: What would really piss our customers off?

Instead, we get responses like this one from Arnell chairman and chief creative director Peter Arnell*, quoted in the Times:

“I’m incredibly surprised by the reaction,” he added, referring to the complaints about his agency’s design work, but “I’m glad Tropicana is getting this kind of attention.”

Armin Vit at brand-identity agency Under Consideration could barely restrain his fury:

Um, yeah, it's the wrong kind of attention, the kind you would never want your client to get because of your work. Way to work the press. In terms of design justice coming down upon crappy design, this day is as big as it gets. Every year from here henceforth, on February 23rd, corporations should be allowed to take back a design mistake and repent… a branding Yom Kippur if you will.

By the way, the Times story laid some of the credit, or blame, for the Tropicana debacle on everyone's favorite scapegoat, "interactive technologies" like Twitter and blogs, which encourage those pesky consumers to actually tell you what they think.

As for the Tropicana redesign, all is not lost, apparently:

One aspect of the new Tropicana packaging is being salvaged: plastic caps for the cartons, also designed by Arnell, that are shaped and colored like oranges.

You know why? Customers liked them. Giving customers what they like: what a concept!

* That would be the Peter Arnell who told Ad Age, "When I did the Pepsi logo, I told Pepsi that I wanted to go to Asia, to China and Japan, for a month and tuck myself away and just design it and study it and create it. There was a lot of research, a lot of consumer data points ... and dialogue that I had with the folks at Pepsi, consumers and retailers. We knew what we were doing." Uh-huh.

Focus groups are not necessarily a waste of time when used properly, i.e. as an exploratory phase and a prelude to more in-depth quantitative research. In fact, when used appropriately, they are indispensable!

Elena: Yes, that was my point--that the research and interviews need to be done before design work begins. Too often, focus groups are used after the fact, to rubber-stamp a direction or elicit a vote.

count me as the curmudgeon/devil's advocate here. I had switched away from the mainstream brands like tropicana to florida's natural and organic valley, expecting an improved flavor over the mainstream. this packaging had actually swayed me to trying it again - just looked like those really good glasses of valencia that you pay someone else to squeeze.

it would be interesting to look at Tropicana's mkt share since the organic movement started a few years back, and see if they were listening to the RIGHT customers here. Maybe they needed to ask the ones they lost rather than those who weren't necessarily going to leave anyway (a la Republican party politics in 2008).

Wow. That redesigned package is a hundred times worse than the new Pepsi logo and packaging. (For the record, I like the clean new look of Pepsi's packaging, even though I'm pretty meh about the new logo.)

The old Tropicana package says, "So fresh you might as well be sucking it straight from a freshly picked orange," while the new one merely says, "There is orange juice inside this container."

How exactly does this agency get any work when they spout such BS and produce such mediocre designs?

Best news I've heard all week! Everywhere I've turned I've seen criticism of the new design or huge billboards with the Squeeze campaign. I love Tropicana juice (didn't have any opinion on the company until the redesign mess - didn't even know they were owned by Pepsi) and am glad that even if it's late, they're finally listening.