Links for a new era:

I wish Dzine Blog would have chosen a better word than "kick-ass" to describe this portfolio of 54 beautifully executed logos, and it would have been nice to see a few words about what each logo depicts, but I can't complain about the aesthetic judgment. Take a look at this elegant example: 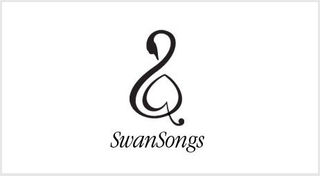 According to the site of designer Maggie Macnab, SwanSongs is "a non-profit that fulfills musical wishes at the end of life." Perfect name. (Hat tip: Karen at Verbatim).

I saw one of these Nvidia commercials ("Busterfump") in a movie theater a couple of weeks ago and actually scribbled a note to myself to check it out online. How often does that happen? Really, they're that good.

The weirdest team names in sports, including Deportiva Wanka, the Macon Whoopee, and the Peoria Prancers. (Via Nama Sutra.)

Two tributes to Messrs. Strunk and White, whose Elements of Style is the most disparaged essential handbook on a writer's bookshelf: The Elements of Spam (a parody, from McSweeney's) and Strunk & Twite (a helpful style guide for Twitter users, from Grammar Girl).

Since 2005, Nicholas Felton has published an account of his yearly activities in the form of a personal annual report from "Feltron." Here's the 2008 edition. And here's an excerpt: "Sick days: Four. Proper house cleanings: Seven. Least kosher meal: Momofuku Ssam (whole pork butt with oysters)." (Update: I neglected to credit Davos Newbies for this.)

For those of us still mourning the demise of "The Wire": a five-minute rap video that sums about all five seasons in 5 minutes. Brilliant. (Via Kottke.)

Did you miss yesterday's Obama inaugural concert at the Lincoln Memorial? It was breathtaking, and you can enjoy it all over again on a special HBO site. Highlights for me included the glorious Renée Fleming's "You'll Never Walk Alone," Bettye LaVette and Jon Bon Jovi's stirring "Change Gonna Come," and, at the end, a beaming 89-year-old Pete Seeger singing Woody Guthrie's anthem, "This Land Is Your Land," with his grandson and Bruce Springsteen. All the verses, including the controversial radical ones.