"What's It Called?": The Answer 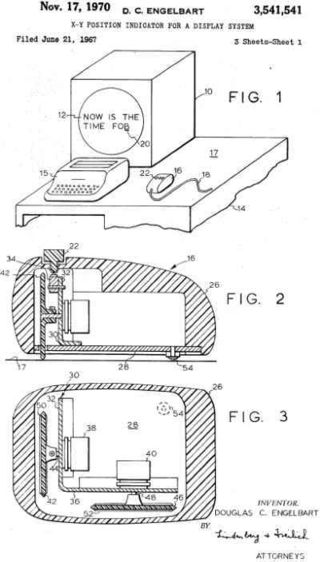 Yesterday's question: What is the familiar name of the device originally patented as the "X-Y Position Indicator for a Display System"?

The answer: The computer mouse.

It was 40 years ago today—Dec. 9, 1968 — that the mouse made its public debut at the San Francisco Convention Center*. Douglas Engelbart of Stanford Research Institute brought about 1,000 computer aficionados in the audience to their feet after his demonstration of the world's first personal computer.

According to a page-one story in yesterday's San Francisco Chronicle:

The invention featured rudimentary windows and hyperlinks that allowed jumping from one document to another, as well as the ability to edit text and add graphics on a video monitor. The presentation also offered a peek at future computer networks that would become the Internet.

"No one has ever before or since seen such a collection of great ideas in one demonstration," said SRI President and CEO Curt Carlson.

Although Engelbart received the patent for his mouse, he was not its original creator. That honor goes to his SRI colleague Bill English, who built the paleo-mouse device in 1964.

It consisted of a small pine box equipped with a red clicker button on top and two wheels placed at right angles underneath that regulated the electric current that moved the cursor, then called the "bug."

No one is sure who on the small team coined the term "mouse" for the little box with a wire coming out, English said. But the name stuck once it was introduced.

"A small box with a tail coming out - you might as well call it a mouse," said English, who figured out how to construct the device based on a sketch that Engelbart had drawn in 1961.

The 1968 event—known to computer historians as "the mother of all demos" —will be commemorated at Stanford this afternoon in an event titled "Engelbart and the Dawn of Interactive Computing: SRI's Revolutionary 1968 Demo." Engelbart and other computing pioneers are expected to attend.

For reference: Forty years ago, Bill Gates was 12 years old. Steve Jobs was 13. According to the NameWire blog, Apple bought the license for the mouse a couple of years after Engelbart's patent expired. The price? Just $40,000.

Watch Doug Engelbart's original demo and read the 1968 announcement of his presentation.

Listen to "Forty Years of the PC," a panel discussion on KQED-FM with listener participation. (Audio up later today.)

Image of Engelbart's original mouse schematic from JansenPrice, which proposes that the mouse be renamed the XYPI (pronounced "zippy"), an acronym of X-Y Position Indicator.

* I'm not sure what or where this building was. The current convention center, named for assassinated mayor George Moscone, was completed in 1981. Before Moscone Center, some San Francisco conventions (such as the 1964 Republican Convention) were held at the Cow Palace, originally known as the California State Livestock Pavilion.

Posted at 09:40 AM in Contests, Puzzles & Games, Naming, Technology | Permalink

Phooey, that was my first guess, but I changed my mind and said cursor instead. Which is dumb, because a cursor isn't a device. When will I learn to trust my first instincts? (Answer: Never.)