« Inspiration Needed. Six Words Only, Please | Main | How the Kindle Got Its Name » 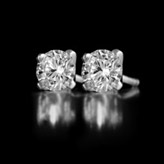 So you think your employment outlook is iffy? Spare a tear, if you will, for the folks who fabricate desire and demand for diamonds in these parlous times. It's a tough job, yet they persist. Like a rock, you might say.

From a trade publication, National Jeweler:

With a marketing budget that is double last year's (precise figures are not disclosed), the campaign will encompass television, print and online advertising, Diamond Promotion Service (DPS) executives said during a breakfast presentation for the trade and the press at the Waldorf-Astoria in New York City ...

The ad blitz is expected to reach 97 million U.S. consumers, or nearly half the adult population, at least six times over the holiday season.

One of the print ads currently in circulation reads:

Perhaps now is an opportunity to reassess what really matters. After all, if everything you ever bought her disappeared overnight, what would she truly miss?

The dramatically lit photo depicts, of course, a stonking pair of diamond earrings.

There are multiple ways of reading this campaign. Passage des Perles is peeved by the tacit sexism of the message:

You've gotta hand it to the present day Don Draper who cast this lifeline toward a gutted industry. Don did his research well. I do want fewer things of higher quality, and carats trump costume. But I rankled at the patronizing "everything you ever bought her". Isn't this the same industry who in boom times encouraged women to buy their own stones? What happened? Suddenly we're all retro and it's over to the guy, who hardly needs the pressure now.

Sexism—or chutzpah? Here's another way of cracking the nut. Faced with the same challenge—getting a guy to buy more bling when he may be having trouble making the car payments—JCPenney takes a humorous tack, with overtones of public shaming. The subtext: No little box with sparkly stuff inside? Dude, you are SO BUSTED.

Here's the problem with diamonds: They can't feed you or keep you warm; they can't transport you to work; they're easy to lose and notoriously poor investments, as this still-relevant 1982 Atlantic article, "Have You Ever Tried to Sell a Diamond?", attests. And that's what makes diamond marketing so fascinating. Paradoxically, diamond sellers have relied more and more on the trumped-up scarcity pitch as the world supply of diamonds has increased. Indeed, if there weren't such a glut of diamonds the De Beers cartel wouldn't be so frantic to unload them. (The market is even more competitive now that cheap laboratory diamonds, which mostly didn't exist in 1982, are virtually indistinguishable from the slave-labor-mined variety.) But instead of slashing prices, like other desperate, overstocked retailers, De Beers is doing what it's done for nearly a century: brazenly burnishing the myth that diamonds are not a frivolous luxury but rather the hard currency of the romantic enterprise. Even in bleak economic times. Especially in bleak economic times.

A little historical background from the Atlantic article:

In their subsequent investigation of the American diamond market, the staff of [ad agency] N. W. Ayer found that since the end of World War I, in 1919, the total amount of diamonds sold in America, measured in carats, had declined by 50 percent; at the same time, the quality of the diamonds, measured in dollar value, had declined by nearly 100 percent. An Ayer memo concluded that the depressed state of the market for diamonds was "the result of the economy, changes in social attitudes and the promotion of competitive luxuries."

Although it could do little about the state of the economy, N. W. Ayer suggested that through a well-orchestrated advertising and public-relations campaign it could have a significant impact on the "social attitudes of the public at large and thereby channel American spending toward larger and more expensive diamonds instead of "competitive luxuries." Specifically, the Ayer study stressed the need to strengthen the association in the public's mind of diamonds with romance. Since "young men buy over 90% of all engagement rings" it would be crucial to inculcate in them the idea that diamonds were a gift of love: the larger and finer the diamond, the greater the expression of love. Similarly, young women had to be encouraged to view diamonds as an integral part of any romantic courtship.

And today? Janus Thinking, a research and consulting firm that specializes in the diamond industry, has this to say (again, hat tip to Passage des Perles):

More importantly, as the recent economic events taught us, there are economic factors that we do not have control of or cannot change. Psychological factors are within our reach and once we understand them we can certainly try to cope with them.

My advice? Skip the diamonds. (Skip the vacuum cleaner, too.) Give books! I'll have some gift recommendations in a few days.

Posted at 07:42 AM in Advertising, Economy, Jewelry, Marketing, Psychology | Permalink

I think that DeBeers needs to rethink its setting designs if they really want to sell anything. An"I'm a Boomer" stick pin with one small diamond would help their business a lot.

For a more recent treatment of the world of diamonds and DeBeers, I recommend Tom Zoellner's "The Heartless Stone":

@Mike: Thanks for that tip. I see it's on the shelf at my branch library; I'll check it out later today!