Why would anyone name a town "Dearth," "Nada," or "Zero"? Why would three towns name themselves "Nameless"? American artist Peter Wegner may not have the answers, but he knows the map coordinates: 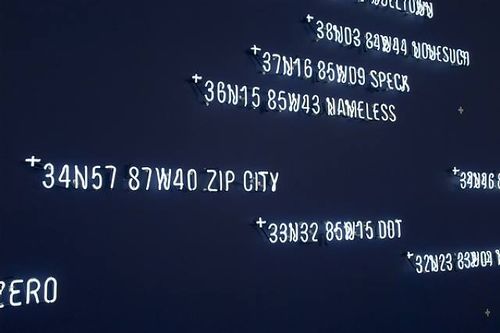 I saw Wegner's mammoth (400 square feet) neon-and-vinyl installation, "The United States of Nothing," last weekend at SFMOMA, which recently acquired the work. The piece occupies an entire wall and manages to be both dazzling and desolate. I gazed at it for a long time, marveling that all the place names are authentic and wondering why, why, why. Were some of the names jokes? Bitter admissions of defeat? Was "Zero" someone's lucky number?

In an interview with KQED Arts earlier this year, Wegner had this to say about the work (then in progress):

It's about the act of naming, the desolation of the American landscape, redundancy, cartography, boosterism, bad luck, the void, and what happens when you put a spark of electrical current through invisible gas.

Wegner is originally from South Dakota, where I'm told nothingness is a familiar part of the landscape.

By the way, one of the stories about Nome, Alaska, is that the town's name was originally written as "? Name" and a mapmaker misread the note as "C [for Cape] Nome." However, there are other versions of the story.

Readers who live outside the United States: does your country have "nothing" place names? Or is this a peculiarly American phenomenon?