How the Kindle Got Its Name 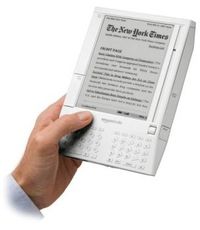 When Amazon introduced its electronic book reader, Kindle, just over a year ago, the device's name was the subject of  jests about book burning. Now Steven Heller reveals that the Kindle was named by well-known Bay Area graphic designer Michael Cronan, who with his wife and partner, Karin Hibma, owns the branding agency Cronan.

About three years ago, Cronan was asked by Lab126, an Amazon.com company, to name a consumer product line, which turned out to be the Kindle. Hibma says, "Michael came up with the name through our usual practice of exploring the depths of what the potential for the new product and product line could be and how the company wanted to present it. Jeff [Bezos, the CEO] wanted to talk about the future of reading, but in a small, not braggadocio way. We didn't want it to be 'techie' or trite, and we wanted it to be memorable, and meaningful in many ways of expression, from 'I love curling up with my Kindle to read a new book' to 'When I'm stuck in the airport or on line, I can Kindle my newspaper, favorite blogs or half a dozen books I'm reading.'"

Kindle means to set alight or start to burn, to arouse or be aroused, to make or become bright. The word's roots are from the Old Norse word kyndill, meaning Candle. "I verified that it had deep roots in literature," adds Hibma. "From Voltaire: 'The instruction we find in books is like fire. We fetch it from our neighbours, kindle it at home, communicate it to others and it becomes the property of all.'" No other name could hold a candle to Kindle.

Comments on Heller's post are about equally divided between "it's a brilliant name" and "I'm thinking Fahrenheit 451." One commenter said the name reminded her of the German diminutive for "child," Kindl; a dissatisfied customer wrote: "I can't tell you how often I've wanted to kindle my Kindle!"

I don't own a Kindle¹, but I do have a Michael Cronan story. Years ago I wrote an article for Step-by-Step Graphics magazine (now defunct?) about a poster Cronan had designed for San Francisco's Pickle Family Circus². At the time, it was the largest project ever executed in Adobe Illustrator. Cronan was cordial, articulate, and more generous with his time than I'd expected a superstar designer to be, and he seemed happy enough with the published article. Then we lost touch, even though he lives just up the road, in Berkeley. Some time afterward, Cronan and Hibma launched a clothing line, Walking Man, that got lots of local press but apparently fizzled. I hadn't known until recently that Cronan was doing naming work. Maybe it's time to get reacquainted...

¹ Nor, apparently, am I likely to any time soon. The device is once again sold out, as it has been periodically since its introduction.

² If you're not a Bay Area resident you may never have heard of the Pickles, but you may recognize the names of two of the circus's most famous alumni: the brilliant clowns Bill Irwin (currently in Rachel Getting Married) and Geoff Hoyle.

Posted at 10:34 AM in Books, How They Got That Name, Naming, Technology | Permalink

I LOVE my Kindle, and the name, too! It's the best thing that happened to Sunday morning since the newspaper. Now that I think about it, I'm glad I don't have to call it some obnoxious name that isn't a real word. The Kindle looks clunky and computerish enough as it is -- yep, love it but don't necessarily want to date it in public -- so the name really needed to work hard to redeem it from looking like it might have come out of the seat in front of me in an airplane.

How delightful to finally get a fun, informative and erudite answer to a question in Google.