Haven't got the do-re-mi? You can still do the ho-ho-ho:

1. Paul and Storm present "The 25 Days of Newman," a new Randy-Newman-inspired, strangely familiar-sounding movie theme song every day until Christmas. (Schindler's List: "The Nazis suck/But you're in luck/You learn there's more to life than making a buck.") (Via Lore Sjöberg.)

2. Bush's lame duckitude (as Rachel Maddow calls it) is a lot more tolerable when you're chortling over The Red Phone, Mxrk's four- or six-panel imaginary phone conversations between W. and Obama. He's been posting the comics almost daily. Go, Mxrk, go!

3. Sure, it makes calls, takes pictures, sends e-mail, yada yada. But the Pomegranate Phone is so much more. A shaver! A harmonica! A coffeemaker with state-of-the-art Aquagranate technology! And just like the BlackBerry, it's made (well, conceived) in Canada, so you know it's wholesome and bilingual, too. (Via Ari Herzog.)

4. I've been loving all the Facebook parodies. The latest one to catch my attention may be the best of all: Austenbook. Because you know Jane Austen's characters would have totally hearted Facebook, am I right? 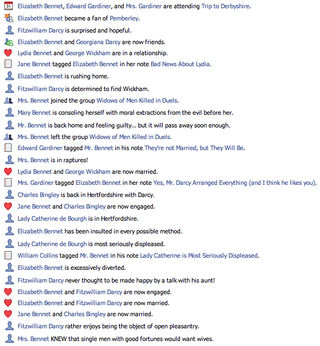 5. Paul Krugman, who just picked up his Nobel Prize in economics, may be gnashing his teeth and rending his garments over the leading indicators (should we start calling them the trailing indicators?), but at least his sense of humor is intact.

6. In related news, LOLFed is to financial news what LOLCats is to ... well, cats, I guess.

The pomegranate phone is spectacular -- a brilliant device -- what we all want for Christmas! And as a confirmed Austen devotee, "Austenbook" is everything I could have wanted, and more. Thanks!