I've been reading Giovanni Rodriguez's series of posts, "Advertising with Character," on his blog, The Hubbub, and encourage you to do so, too. Be sure to start at the beginning, with the prologue, which looks at the character of Joe the Plumber from the recent presidential campaign and compares him with—I can't believe I hadn't thought of this myself—Josephine the Plumber, the spokescharacter for Procter & Gamble's Comet cleanser, introduced in the late 1960s.

--the most successful, memorable characters represent universal truths.  They are not just stereotypes (though many are).  The best ones are archetypes.

--as archetypes, they enable the storyteller to connect profoundly with the audience in ways that other characters cannot. Example:  the recurring character of Jack Falstaff, who appears -- always as himself --  in several of Shakespeare's plays.

--as archetypes, they enable the storyteller to extend the value of their work beyond a single unit of entertainment.

Great stuff, and I look forward to reading the remaining installments.

Coincidentally, I've been working for weeks on an advertising-character post myself. It's for a regional brand that probably didn't make Giovanni's list; I hope to post it sometime in January.

Meanwhile, feast your eyes on this advertising character, born in Lithuania and temporarily residing on a shelf at EuroMix*, my neighborhood source for all manner of ex-Soviet Bloc comestibles—your head cheese, your ballerina-themed chocolate boxes, your kasha-in-a-tube. (OK, I made up the last one, but it's not far from reality.) The clerks speak about twelve words of English between them, and my Russian vocabulary is about the same size, so I couldn't interview them about this brand. Perhaps it speaks for itself: 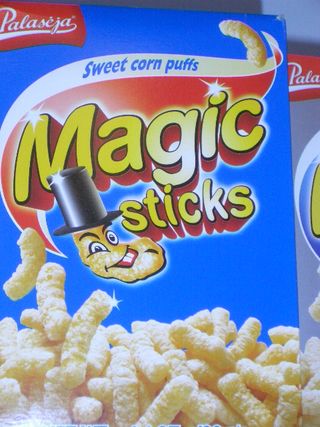 The side panels have text in several languages, but nowhere could I find an identity for this bizarre Jay Leno-chinned cartoon. I've decided to call him Psycho Puff Daddy Warbucks.

Posted at 10:55 AM in Advertising, Design, Story | Permalink

Mr. Peanut also has a top hat. I wonder if this indicates a high class product? Or... maybe he is the magician that conjurs up the Magic Sticks? I'm curious as to what ,"Palaseja" means.
Anyway, I've noticed that Californian cartoons and animations used for advertising purposes are far more detailed and stylized in general than others. The influence of Disney and Hollywood? How about all those now classic fruit crate labels? Can't wait to see what you come up with. I'm sure it'll be a peach.