That your Thanksgiving dinner doesn't include turbaconducken: 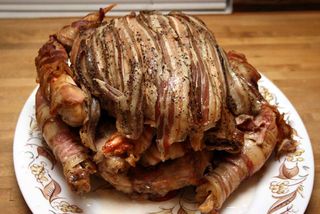 Yes, that's turducken wrapped in bacon, brought to you by the industrious folks at Bacon Today. Because sometimes you need a little mammal around your three-fowl pièce de résistance. (Or because sometimes you're embarrassed to order a dish whose first syllable is turd.)

Just so's you know, it's not just the turkey that's sheathed in pig parts. Mais non: Each poultry segment is separately be-baconed before being stuffed into the next-larger animal. It's a real lardapalooza!

Neologism analysis: I didn't immediately see bacon in the middle of turbaconducken. Instead, I saw turba-con, which sounds like a meetup for Sikhs in tech. Okay, now I'm duckin'.

Hat tip to Beancounters, who offers a little Thanksgiving quiz to go with that yummy/revolting photo.

In other Thanksgiving news, Sarah Palin issues her list of thankfulnesses. And I'll be taking the day off from the blogosphere tomorrow.

Posted at 07:21 AM in Food and Drink, Neologisms, Words | Permalink