Many thanks to Bill Brohaugh at Everything You Know About English Is Wrong for introducing me to the insanely wonderful Japes for Owre Times, which will gladden the heart of anyone who learned and loved The Canterbury Tales. Every day, Japes for Owre Times translates one newspaper comic strip into Middle English. Why? Quoth the bloggist: "Because we can." And because, frankly, you haven't read "Beetle Bailey" until you've read it thus:

My favorite part of the blog isn't even the translations, which are superb, forsooth; it's the seething tone of the writer, Angry Kem, who calls herself a "bad-tempered English 'prof.'"

Now we fast-forward to the present century, where the blogger known as Mxrk conducts an occasional shadow caption contest as an alternative to The New Yorker's back-page cartoon caption contest (whose winners, writes Mxrk, are chosen according to the "not funny" method). Here's the cartoon that's currently being voted on (contest #163) in the magazine: 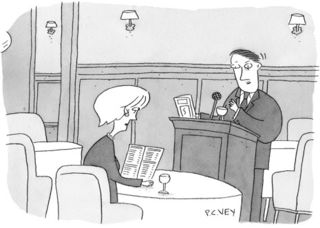 I've written previously about the New Yorker contest (here), which I've entered unsuccessfully; call me a Bitter, but I concur with cartoonist Roz Chast, whose work has appeared in the New Yorker for many years. During a City Arts & Lectures event in San Francisco last year, she was asked by an audience member what she thought of the contest. As Leah Garchik reported in her San Francisco Chronicle column: "I really do not like it," she said. "I feel it demeans cartoonists and cartooning. I feel this is not something they would do to John Updike, like, 'Hey, John! How about writing a story and then you can leave off the last paragraph and writers can submit how they think it should end? And then we'll have a contest!' ... Why is it that just because we are cartoonists, we are subjected to this?"

I understand and agree that masters in any field would not want their work vandalized publically,however, a quick sketch made for a caption contest with the artists permission doesn't seem to be doing much harm. A paint by numbers Chagall placed in a museum may be another story.
Before I read about a real cartoonists( Chast's) feelings I had already sent in a caption to "Shadow Caption". I imagined that the woman was Cindy McCain and John was giving a speech at a fundraiser. Cindy says," Sorry John ,I'm leaving early. I want to watch Sarah on SNL." John replies," Wait up. I'll be there in a minute."

it's not that it does any harm. it's that the captions that win are so lame. the only harm is to the new yorker's legacy of quality humor.

when i go to a fine restaurant i want some fine food on my plate.

One of my favorite elements of Japes is the creativity of translation--including translating Zero's name to Noght in the Beetle example here. In one installment, Angry Kem writes, "I quite enjoyed translating 'telephone'; I took the Greek bits of the word and replaced them with relatively equivalent English bits. Now, if you'll excuse me, I must go answer the fersoun." (http://middleenglishcomics.blogspot.com/2008/09/drugs-are-bad-etc-etc-etc.html)