« Nicely Named: The Bassment | Main | On Isms and Code-Switching »

No doubt you've been reading a lot of headlines like these lately:

"Tank" is a vivid, headline-friendly of saying "plunge" or "drop precipitously." But then there's this expression:

That last reference is to NewsHour anchor Gwen Ifill, who moderated the vice-presidential debate; right-wing commentator Malkin, fulminating over Ifill's forthcoming book about race and presidential politics, fired this zinger: "She's so far in the tank for the Democratic presidential candidate, her oxygen delivery line is running out."

And then there's this less-frequent variation¹:

Arnold Schwarzenegger Is Disgracefully in the Tank with Big Biotech (Secondhand Smoke, a bioethics blog, Sept. 29, 2008)

"There are seven sharks in the tank with the economy" (Kevin Phillips, guest on "Bill Moyers Journal," Sept. 19, 2008)

Unfortunately, I could come up with only some general conclusions, none of what clarify the difference between "for" and "with."

Back in April, language guy William Safire (who, let the record show, is in the tank for McCain), wrote about in the tank in his New York Times Sunday Magazine column:

The primary meaning is evident from the context: to be in the tank is to be “lovingly enthralled; foolishly enraptured; passionately bedazzled.” A more sinister meaning, however, hovers in the shadows: “self-interestedly involved; surreptitiously supportive” and in extreme cases “corruptly influenced.”

Although the phrase has proliferated during this campaign season, it isn't new; Safire provides a 1992 citation from President George H.W. Bush: “My opponent’s [i.e., Bill Clinton's] campaign is being backed by practically every trial lawyer who ever wore a tasseled loafer. He’s not in the ring with them; he’s in the tank.”

That apposition suggests that the term comes, like much of our slang (knockout, in my corner, on the ropes), from the world of boxing. Safire consulted a sports-slang maven, Paul Dickson, who followed that thread back to a 1930 story in the Los Angeles Times, about a boxer who admitted to taking a dive--an expression that, like in the tank and to tank, suggests deep water. Here's Safire:

A tank was the 19th-century term for what we now call a swimming pool; the metaphor evoked a picture of diving to the ring’s canvas-covered floor — as if into a pool — to feign loss of consciousness. “By extension,” Dickson reports, “when a fighter or anything else (including a stock) takes a nose dive he or she has tanked.”

Eric Zorn, blogging for the Chicago Tribune, rounded up a bunch of links to analysis of in the tank and concluded that the boxing connection was legit. But the boxing term is in the tank, not in the tank for. Could there possibly be another etymology?

Here's a little background. The word tank came into English in the early 17th century from Portuguese tanque, "reservoir," which is either a borrowing from Gujarati tankh, "cistern," or the source of the Indian word. (The Portuguese, you will recall, spent about four centuries on the Indian subcontinent as colonizers.) Tank became the term for "fuel container" around 1902; tanker, for "ship carrying oil," emerged around the same time. The military adopted tank in 1915 as a code name for armored vehicles that resembled benzene tanks, and the code name slipped into general usage. A tank suit (1920s) got its name because it was worn in a swimming tank, or pool; today tank-type apparel can be any sleeveless, scoop-necked garment.

All those meanings provide plenty of potential clues to the meaning of in the tank. One of Zorn's commenters said the expression comes from commercial fishing: "Nothing is guaranteed until the day's catch is 'in the tank' -- meaning permanently 'hooked'." Someone else thought it meant "in the gas tank." And one commenter came up with a clever suggestion that clarifies the political connection: "I thought 'in the tank' meant someone who actively supported Dukakis even after this photo was published": 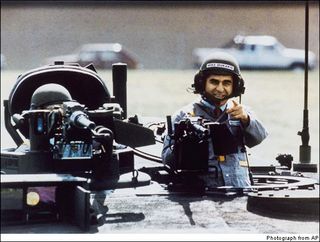 It was this failed photo op, some of you may remember, that turned Michael Dukakis's 1988 presidential bid into joke material. If "Dukakis in the tank" is shorthand for bad political PR, perhaps in the tank for means, by extension, "willing to go to embarrassing lengths, even at the risk of compromising one's dignity, to further a cause." And while in the tank for suggests overt advocacy, in the tank with seems to indicate only correlation. Those "sharks in the tank with the economy" are swimming around together, but they haven't made an endorsement.

At least that's how I see it. Any other ideas? Tanks in advance.

UPDATE: In a comment, Grant Barrett referred me to an explanation of "in the tank" that he'd written for the discussion forum of his radio show, A Way with Words. He also included a link to a Slate.com article, published just a few days ago, about the expression, for which Barrett contributed research. His conclusion, as summed up by Slate: "Aquatics by way of pugilism"

¹ Many hits for "in the tank with" turn out to be links to Sea World or to plumbing how-to sites.

The boxing angle is the only one that can be supported by the evidence, I think. I sent this summary http://tinyurl.com/5q3ybf to Juliet Lapidos who wrote this article, http://www.slate.com/id/2203028/ "Explainer Goes in the Tank," for Slate. It's similar to what I sent to Safire at the time he wrote about "in the tank," though he quoted only Dickson. A difference is that I believe there's a direct connection to actual tanks, not a metaphorical one.

@Grant: Thanks for the link and for the Slate article, which I somehow missed while researching the expression. I've elevated the substance of your comment to the body of the post.

I have to mention first that I'm not a professional namer or writer of any kind and a poor researcher at best. However, I do enjoy the expert presentations on this blog and the opportunity to send in my thoughts.
Some other uses of "tank":from PBS, a member of a Washinghton "think tank"; a holding cell," drunk tank"; "tanked up" drunken. Using "sharks in the tank" resembles the warning , "There is a shark in your pool." Be careful , you are playing with someone that's dangerous. "In the tank with", seems to denote "plays together with" ,equally,as a member of ,or sympathizes with that swimming pools group. "She's in the tank (pool) with the herbalists. And tank or tanked used as a verb to dive down.
All that seems fairly innocent but "in the tank FOR " or "in Joe's tank" seems to idicate some kind of control by the owner of the tank. From the movie, The Godfather: "the judge is in our pocket"( he owes us a favor and must do what we tell him to do.) "Tank" being used as a personal container the same as "pocket" may hint at some underhanded dealings or illegal connections without actually saying it, which might be why it's beening used so much in this election. For example , we might read : "He is popular with the press." (He sells newspapers and attracts viewers.) Compared to : "The press is in his tank" or "they are in the tank for him." It alludes to nefarious behavior.