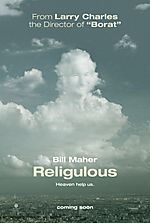 I saw the trailer for Bill Maher's new documentary, Religulous, the other night; yesterday I heard Maher and the film's director, Larry Charles, on Fresh Air. The movie, which opens Friday, is a satirical and skeptical look at the world's religions. Sounds like fun to me.

But I do have this little problem with the title.

According to Maher, "religulous" is a portmanteau of religious and ridiculous, which makes sense. Here's what doesn't: it's pronounced with a soft g: relijulous.

Now, God (or whatever) knows there aren't a lot of hard-and-fast rules of pronunciation in English. Ours is the language, after all, in which though, through, and tough don't rhyme. But, dammit, g before u is hard, not soft. I tried and failed to come up with an exception. Ambiguous. Contiguous. Exiguous.

How difficult would it have been to insert an i after the u? Religiulous makes the pronunciation self-evident. Or what about giving it a hard-g pronunciation? I could live with that, too.

Instead, we get this weird spelling-pronunciation schism. It's heresy, I tell you!

Posted at 10:17 AM in Film, Portmanteaus, Pronunciation, Spelling | Permalink

Well dog my cats and happy new year, I thought the "G" was hard too, even though it's slightly reminiscent of "Caligula" that way.

Yes, an outrage. Not only is the pronunciation deceptive but the meaning is lost. Why not, " Reliculous"?

I saw him on last night's Daily Show and had the same reaction! But I wasn't armed with the grammar rule to understand the reasons behind WHY I felt this way, so I just felt a vague sense of dissatisfaction. Thank you, Grammar Therapist. Now I can begin the process of healing.

I thought the same thing! I've only read about it, not seen any ads, and just kept thinking, "Yes, but how do I pronounce it?!"

Ease up. Everyone's being a little parochulous, or maybe the moe jest is pedantiacal. This is a joke coinage with little-to-no chance of achieving viability; though it's nice to see people we more or less admire showing they respect what more or less passes for structured English neologizing, the first job always has to be selling the product. Anyone trying to piece out 'religiulous' would likely end up moving the accent and pronouncing it 're-li-ju-lious' (yes, I'm aware the long 'e' sound moved, but that's the kind of shit that happens in your head), or try to spell it out literally and end up saying 're-lij-e-you-lous'.

Re-lig-u-lous with a hard 'g' doesn't sound like religion, nor does 'reliculous'' (which doesn't look like it either). They certainly came up with the sound before the spelling. They knew they'd have to sell it on talk shows no matter what they did because it's not a very self-explanatory portmanteau. Added benefit: 'religulous', soft g, is a lot funnier than anything else (that I can come up with, at least).

p.s. 'Cough' doesn't rhyme with though, through or rough either. Lots of Irish words and names have other sounds: 'lough' (sounds like cow), from which we get 'loch', McCollough, in which the 'g' and 'h' get the silent treatment, or Murdough, the predecessor of Murdock. Enock! Or too mough.

p.p.p.s. Favorite nearly vowelless word, edging out 'rhythm': crwth (rhymes with booth), a Celtic string instrument: "He intricately rhymes, to the music of crwth and pibgorn, all night long.” (Dylan Thomas, Under Milkwood) That, if you ever wondered, is why we say "and even sometimes 'w' ".