« Word of the Week: Cockamamie | Main | Doing the Right Thing »

There's been plenty of ugliness in the current presidential campaign, but I've also found examples of beauty, humor, and creativity. Here are a few recent sightings.

I love "Bark for Barack!" and the Constructivist look of this poster from Obama Dogs Unite, a project of a Richmond (California) dog day-care and boarding business. I suppose people who mistakenly maintain that Obama's a socialist (where is that coming from? Cold War nostalgia?) will consider this poster Exhibit A. To which I say: lighten up! And talk to some Europeans!

(They could have taken it a step further: "YES WE CANine.")

As we know, cats tend to register as Independents, but partisan felines have their own nicely executed icon: 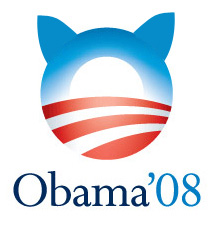 Karen Wise, posting on Twitter, pointed me to Design For Obama, created by two Rhode Island School of Design students with the support of the influential design blog Design Observer. I like this concept: 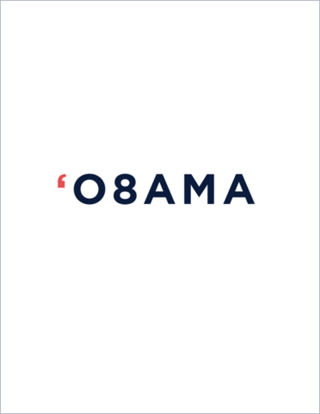 ... but oh, how I wish the designer hadn't used a backward apostrophe. (This computer-generated error happens to be a pet peeve of mine. It shows up in the Bark for Barack poster, too. Grrr.)

I spotted this bumper sticker, a witty bilingual portmanteau, in the parking lot of my gym. It's a blend of "Obama" and "vámonos," Spanish for "let's go." (In Spanish, v and b are pronounced identically.) 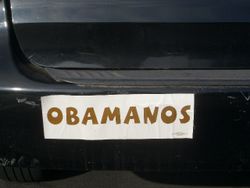 I tried to find equally elegant artifacts from the McCain-Palin campaign, but had little luck. I did find some clever wordplay and design from Schlafly Beer in St. Louis, via Serious Eats:

This full-bodied, deep reddish-amber lager is strong and malty with a distinctly hopeful aftertaste.

And for "Palin Ale":

You betcha, this amber-colored, medium-bodied British-style ale is delicious. With a smooth, mildly-hoppy, folksy character; this beer pairs well with grilled meats such as beef or..... moose.

(To answer your question: Yes, brewery owner Tom Schlafly is related to right-wing activist and anti-feminist Phyllis Schlafly— he's her nephew—but she isn't involved in the business.)

I also discovered ThoseShirts, whose merchandise represents an ideology that's conservative-trending-to-Neanderthal (e.g., a T-shirt that reads "I'd Rather Be Waterboarding") but whose slogan made me laugh out loud: Effing the Ineffable Since 1991.

I did a little research, and it turns out that the phrase "effing the ineffable" produces more than 4,000 Google hits. (ThoseShirts doesn't show up on the first three pages.) In fact, the first person to use the phrase ("I'm in the business of effing the ineffable") may have been Alan Watts (1915-1973), noted Zen Buddhist, experimenter with psychotropic drugs, and hero to a generation of hippies. Politically, Watts was a libertarian, which may be why ThoseShirts felt a kinship.

P.S. In his blog, The Name Inspector writes about the linguistic qualities that make Obama "one of the most rhymed- and punned-upon names in the history of U.S. presidential candidates":

The light, open sound of Obama seems to support the message of change that the campaign has highlighted. This is a case of serendipitous sound symbolism. Even the depiction of the “O” as a rising sun in Obama’s official campaign logo seems to delight in the very vowelicity of it all.

Vowelicity: new word of the week!

Posted at 10:12 AM in Design, Food and Drink, Marketing, Politics, Slogans and Taglines, Writing | Permalink

As far as the reversed apostrophe goes in conjunction with the campaign, check out this rendition of a viral marketing campaign (and, um, I maybe possibly coulda had something to do with this particular version):