An ad on the op-ed page of yesterday's New York Times caught my eye, and not only for its ransom-note design: 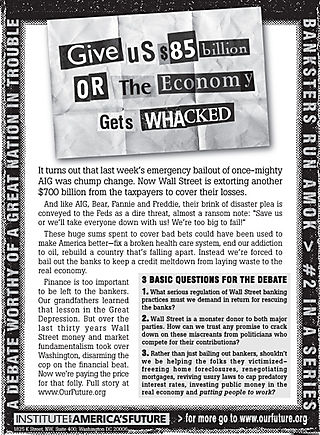 It was that word banksters along the right-hand margin that made me pause. Clever, I thought: a portmanteau of banker and gangster. Seems like the perfect coinage for the high-finance bailfest we're currently witnessing.

Sign me up for all of the above. But what about banksters? Was it invented by one of the institute's neologists?

The Google says ... not so fast. A search for bankster produces more than 27,000 results. Some are for people with the surname Bankster, but there also are many citations from earlier this year, when large cracks began appearing in the fiscal infrastructure. (See, for example, "Saving Bankster Bonuses," posted in March 2008 by a Ron Paul supporter, and "[Treasury Secretary] Paulson's Gift to His Bankster Buddies," also posted in March, on a "radical newsletter in the struggle for peace and justice.") The relevant entry at Urban Dictionary is likewise dated March 2008. (The other entry refers to graffiti artists who emulate British street artist Banksy.)

Double-Tongued Dictionary, Grant Barrett's excellent lexicon of slang and jargon, provides an even earlier--and non-U.S.--citation. A Nov. 10, 2005, article in the Miami Herald claimed the word had been coined by Ecuadoreans during their country's 1998-1999 banking crisis. But in a comment, Tad Cook pointed out that bankster has a much longer and uglier history. "This term has been used by the fringe of the far right in the USA for at least 70 years," Cook wrote, "in reference to some sort of conspiracy involving bankers and the Federal Reserve."

He's right. And not just "some sort of conspiracy." Take a look, if you have the stomach for it, at this venomous bit of propaganda about "Judeo-Masonic Banksters" and "Jewish Banksters, such as Rothschild and Warburg." Or this screed, sweetly titled "Time to Remove the Parasitic War-Loving Zionist Bankster Brain."

Coincidentally or not, Time magazine in the 1930s was fond of bankster as a descriptor for crooked lenders. "Bankster Jailed," reads the headline on a Sept. 5, 1932, story about "Scottish immigrant, onetime plumber, Bankster [John] Bain [who] had prospered in real estate, then branched into banking." And "Bankster's Moll" was the Runyonesque headline on a 1933 review of a novel that attacked "U. S. economic conditions in general, on small-town banksters in particular."

Will the Institute for America's Future reclaim bankster as a progressive epithet? Or will anti-Semitic hatemongers hear it as a dog whistle--a code word aimed at their ears? I wonder.

Update: I also wonder whether the old/scurrilous bankster usage was a portmanteau of banker and shyster.

Posted at 11:16 AM in Advertising, Banking, Epithet, Portmanteaus, Words | Permalink

Odd word, although this magalog did have a very nice name.

@Mark: We were using "magalog" at Banana Republic 20 years ago.

You're right, nice name on that Avon publication! Not sure how they got there, though...