Try It with a Scramble't Egg

I've seen some oddly placed apostrophes in public places—who hasn't?—but never anything quite like this: 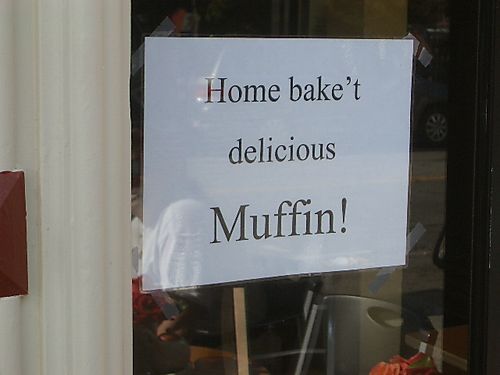 This sign has been bothering me since I first saw it more than a week ago. Botherment led to rumination about the English past tense, and rumination led to Googling. Here's what I learned:

From very early in the development of English, -ed was used to mark the past tense in weak (also known as "regular") verbs such as bake. By contrast, strong (irregular) verbs changed their vowel sounds— sing/sang/sung, for example. Dan Tobias writes:

Originally, the "-ed" suffix was pronounced as a separate syllable, but by Shakespeare's day it was commonly shortened to the modern form, and often spelled like "deceiv'd" to indicate this (and this pronunciation was denounced by linguistic purists of the day as sloppy).

Not Exactly Rocket Science informs us that:

In the Old English of Beowulf, seven different rules competed for governance of English verbs, and only about 75% followed the “-ed” rule. As the centuries ticked by, the irregular verbs became fewer and far between. With new additions to the lexicon taking on the standard regular form (‘googled’ and ‘emailed’), the irregulars face massive pressure to regularise and conform.

Today, some past-tense formations can take -t instead of, or in addition to, -ed. Consider dreamed/dreamt, leaped/leapt, burned/burnt. In these instances, the -t suffix is a marker of British English (BrE) spelling. But in others—slept, crept, kept—there is no -ed equivalent in American English (AmE). And in a few cases AmE uses one spelling for the verb form ("I burned the toast") and another for the adjective ("The carpet comes in the perfect shade of burnt orange").

Sometimes there's a little pronunciation confusion, too. The "baked" in "baked muffin" sounds like it ends in -t. But the "scrambled" in "scrambled eggs" ends with a -d sound. Yeah, go figure.

So here's my theory. I'm guessing that the muffin man (have you seen him?) is a bit spelling-challenged but knows something about phonetics. He was thinking "BrE past-tense suffix"—maybe he's from England, or a Commonwealth country; maybe he learned/learnt English by correspondence course—but when he wrote "Baket" it looked funny, like "basket" misspelled (or misspelt). So he thought, what the hell, let's throw in an apostrophe, because apostrophes are the Band-Aids of spelling. Aren't they?

But I'll entertain other theories. Hold forth!

Bonus link: The apostrophes of Canada, or Canastrophes.

Posted at 10:43 AM in Grammar, Punctuation, Signs, Spelling | Permalink

Is there really a perfect shade of burnt orange?

>The "baked" in "baked muffin" sounds like it ends in -t.
>But the "scrambled" in "scrambled eggs" ends with a -d sound. Yeah, go figure.

That's a reasonably straightforward (straitford) application of a voicing rule -- if the -ed suffix follows a voiceless consonant (-k in baked), it's devoiced, hence pronounciated like -t. Note that this is not universal (else'n we wouldn't ever get "burnt"). Incidentally, I don't think the adj/verb distinction for (respectively) burnt/burned is quite that simple; it's not common for people to say "I like my toast burnt," is it? (??) And then there's "sunburned" ...

BTW, the use of the terms "weak" and "strong" to characterize regular and irregular verb tense formation we owe to the Brothers Grimm (of fairytale fame), who spent equal time on wordology and such, to the point where the consonantal change that characterizes Germanic languages w/r/t their PIE brethren is known as Grimm's Law. As I was given to understand, a regular verb is "weak" because it's not "strong" enough to change its stem vowel (ie it does not undergo ablaut). This led to some (bad) humor in my undergrad days: verbs that both change stem vowel AND use a -t ending (teach, bring) were said to be "flu verbs," coz they were "weak and irregular." Ha-ha, get it? Philology humor, you gotta take what you can get.

PS How are the muffins?

As a minor nitpick, "strong" and "irregular" are not synonymous, nor are "weak" and "regular." As Mike pointed out, there are weak verbs that are irregular, and strong verbs are actually regular in their own way (they fall into several different classes).

Also, -t as a past tense suffix can be found in Old English, too. And back then they actually tended to be pretty consistent about using a -t when it was pronounced as such, whereas today we often use -ed regardless of pronunciation.

But historical linguistics and phonetics aside, that "bake't" is still pretty dang odd.

I agree. Bake't is bad. The sign-keeper should be Rebuk't. And Jonathan Swift possibly agrees with me:

"There is another Sett of Men who have contributed very must to the spoiling of the English Tongue; I mean the Poets, from the Time of the Restoration. These Gentlemen, although they could not be insensible how much our Language was already overstocked with Monosyllables; yet, to same Time and Pains, introduced that barbarous Custom of abbreviating Words, to fit them to the Measure of their Verses; and this they have frequently done, so very injudiciously, as to form such harsh unharmonious Sounds, that none but a Northern Ear could endure: They have joined the most obdurate Consonants without one intervening Vowel, only to shorten a Syllable: And their Taste in time became so depraved, that what was a first a Poetical License not to be justified, they made their Choice, alledging, that the Words pronounced at length, sounded faint and languid. This was a Pretence to take up the same Custom in Prose; so that most of the Books we see now a-days, are full of those Manglings and Abbreviations. Instances of this Abuse are innumerable: What does Your Lordship think of the Words, Drudg'd, Disturb'd, Rebuk't, Fledg'd, and a thousand others, every where to be met in Prose as well as Verse? Where, by leaving out a Vowel to save a Syllable, we form so jarring a Sound, and so difficult to utter, that I have often wondred how it could ever obtain."

I myself have also often "wondred" about the depravity of leaving out a Vowel to save a Syllable.

It's obvious. The signwriter is from Yorkshire, the largest county in England. When saying 'the', Yorkshiremen often just use the letter 't' - for instance, "I'm going down t'street".

Clearly the muffin man was a Yorkshireman trying to warn us to, "Home bake the delicious Muffin". Probably because his shop-made muffins are crap.

"apostrophes are the Band-Aids of spelling"

I think I see a T-shirt.

I think sometimes people use apostrophes to make up their own abbreviations. But in this case "bake't" isn't even any shorter than "baked."