Word of the Week: Emanata 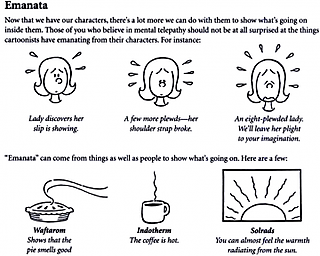 Emanata: Lines and squiggles that emanate from a cartoon character or object to indicate any of a variety of states of being.

Emanata was coined by the American cartoonist Mort Walker (born 1923), creator of the long-running comic strips Beetle Bailey and Hi and Lois. In his Lexicon of Comicana, (1980), Walker introduced a number of invented words, including:

Plewds: teardrop shapes emanating from a character's head to express embarrassment or worry.

Blurgit: a combination of symbols expressing speed and action.

Neoflects: short, straight lines around an object to indicate that it's brand-new.

Although the Lexicon of Comicana was originally written as a satire of cartoonists' stock devices, it's used today as a textbook for art students.

Image from Lexicon of Comicana.