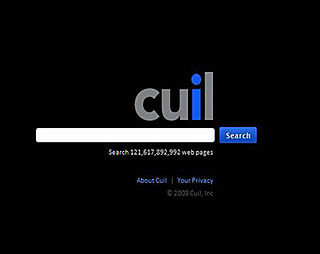 "Queel"? "Quill"? "Coo-ill"? No, no, and no. The name of the new search engine Cuil, which launched yesterday, is pronounced "cool." Why? Well, because they say so. And when you're challenging Google and calling yourself "the world's biggest search engine," brashness is everything.

Here's what Cuil says about itself on the home page:

The Internet has grown exponentially in the last fifteen years but search engines have not kept up—until now. Cuil searches more pages on the Web than anyone else—three times as many as Google and ten times as many as Microsoft.

Rather than rely on superficial popularity metrics, Cuil searches for and ranks pages based on their content and relevance. When we find a page with your keywords, we stay on that page and analyze the rest of its content, its concepts, their inter-relationships and the page’s coherency.

Then we offer you helpful choices and suggestions until you find the page you want and that you know is out there. We believe that analyzing the Web rather than our users is a more useful approach, so we don’t collect data about you and your habits, lest we are tempted to peek. With Cuil, your search history is always private.

Cuil is based in Menlo Park, California; it was founded by a married couple, Tom Costello and Anna Patterson, both of whom have PhDs in computer science. He's an I.B.M alum who specializes in text relevance for searches; she's an expert in scaling architecture who wrote a search engine that she sold to Google, where she worked from 2004 to 2006. All very impressive--as is the fact that the site was launched on a paltry $7 million budget.

Less impressive: Cuil's post-launch performance. Comments all over the online media and blogosphere have been heavily weighted toward the negative. New York Times technology blogger Saul Hansell wrote: "My test of Ms. Patterson’s claim about the size of its search index was to type in the names of some not-so-famous high school and college friends. In half a dozen tries, Google consistently found more pages and put the more general and authoritative pages higher." The majority of his commenters reported similarly disappointing results. In addition, response time has been sluggish, and the site's servers were down for a few hours yesterday.

I had a few site visitors via Cuil yesterday, so I tracked them back to the original search pages--and was flummoxed. Cuil attaches images to its results, and in my case (and apparently many others), most of the images were inappropriate or irrelevant. They certainly didn't come from my blog. Take a look at this Fritinancy/IKEA search and this Fritinancy/baby names search. I recognized only two images on those pages, and both came from posts on completely unrelated topics.

I'm also--to get to the point at last--underwhelmed by Cuil's name, which in news reports is invariably followed by a guide to pronunciation (in print) or spelling (broadcast). That's a needless obstacle to clear branding, and to what end? It's an empty name that says nothing about the technology's advantages, only that--wow--it's cool.

I learned about Cuil a week ago, when it was still in stealth mode and known by its original spelling and logo:

Spelled this way, the name seems to require the "quill" pronunciation. A little research--which I did before the site was launched--revealed that cuill is an old Irish word and personal name. Costello, who is Irish, and Patterson say it means "knowledge." Mac Cuill was a figure in Irish mythology; according to Wikipedia, he took his name from coll, a word meaning "hazel tree." On its FAQ page, Cuil says the word means both "hazel" and "knowledge," and serves up a different myth involving a "young apprentice" named Finn McCuil who partook of the Salmon of Knowledge. (See this Celtic symbolism site for the connection between hazel trees and knowledge or creativity, and for a variant spelling of Finn McCuil.) According to Silicon Republic, which covers Irish technology news, cuil is also modern Irish for "corner." (Update: See reporter Marie Baron's comment, below.)

I asked my Irish friend Síle (pronounced Sheila) Convery, who spoke Irish before she spoke English, how to pronounce Cuill, and she promptly responded, "Quill." On the other hand, there seem to be a lot of bars named "Finn McCool's"--138,000 in a Google search, 4,203 in a Cuil search--so maybe there's some latitude in the Irish-to-English translation.

On the other other hand, there's very little room for error with the French interpretation of Cuil. It's a homophone of the vulgar term cul (ass/arse), and could be mispronounced cuilles couilles (pronounced kwee; slang for testicles--thanks for the spelling correction, Jessica!).

As the lawyers say (thanks again, Jessica!): Cui bono? Who benefits?

This isn't the first enterprise for which Costello and Patterson have chosen a challenging name. In the late 1990s they created a search engine--and a company to support it--called Xift. They eventually sold it to AltaVista, so I can't tell you whether Xift was pronounced "Zift" or "Ex-ift." It may have had something to do with "sift," as in "sifting through results," but that's speculation on my part.

And as long as I'm speculating, here's one more conjecture: I'd bet "Cuil" won the name lottery at least partly because the "cool" pronunciation borrows some of the magical oo! from Google and Yahoo. (You'd be amazed by how much magical thinking surrounds the selection of corporate and product names.) Here's this long-time namer's suggestion: when you want to communicate a breakthrough, do it with a dramatically distinctive pronunciation, not a copycat sound.

Update: See Bradshaw of the Future for an etymological critique of Cuil. And for further clarification on the association between the hazel tree and knowledge, see Druidry.org. An excerpt:

In some accounts, the hazel-nuts cause bubbles of "mystic inspiration" to form on the surface of the streams that flow down from the well; in others, the Salmon of Knowledge and Inspiration eat the nuts and send the husks floating downstream. Those that eat the nuts (or the salmon) gain poetic and mantic powers. Many early Irish tales describe poets and seers as "gaining nuts of Wisdom", which is most likely a metaphor for such heightened states of consciousness, aIthough the more literally-minded have argued that this expression could refer to a potent brew made from hazels that hod [sic] psychotropic effects.

I had settled on the pronunciation "kweel" thanks to that blue "i," which I figured would be stressed. Oh well...I guess I wasn't cuil enough to figure it out.

>Cuil is a short name, which many company founders
>seem to think is the holy grail of naming.

I was wrong to say it meant both back and corner. The Irish for back is 'cúil' but corner is 'cúinne'. My bad. However is is definitively pronounced cool because of the 'fada' over the 'u' which elongates the vowel. :)

I didn't like "Wii" when I first heard it, but I like it now. It helps that the Wii turned out to be a pretty cool product. This one, however, I'm not so sure about.

Thanks for clarifying the relationship between "knowledge" and "hazel." I had read that "Cuil" supposedly meant both somewhere else and was baffled by why they'd want to note both definition, since only the first seemed relevant. However, maybe that's more a result of their search engine logic: irrelevant information and nonsensical associations.

Here's my e-mail to cuil:

Your service works great, it found over 4000 pages with my name on them, double what Google's showing.

But I don't think your name is going to work.

If, after some time, you agree with me, please give me a call - I'd love to name a great new search engine.

I am an experienced freelance namer and tag line writer.

My online resume is here: www.MarkGunnionNames.com

I hope you'll give me a call the next time you need a big bunch of good names, fast. I have been a naming specialist since 1996, and I've worked on hundreds of projects, across every business sector. I'm sure I can bring some good ideas to your next list.

Talk to you soon.

Drew, what relationship between "knowledge" and "hazel"? I can't find one.

@Goofy and @Drew: I've updated the post with a link to Druidry.org, which (FWIW) has a long passage about the hazel tree as a symbol of knowledge/wisdom.

@Mark Gunnion: Technically, I should rap your knuckles for advertising your services in this commercial-free zone, but I'll give you a pass this time! (But only if you bring me in on the Cuil renaming gig.)

As I mentioned on Twitter earlier today, I originally misread it as "Cull," which I think would have made a lot more sense for a search engine.