Good thing I was on foot when I spotted this billboard: 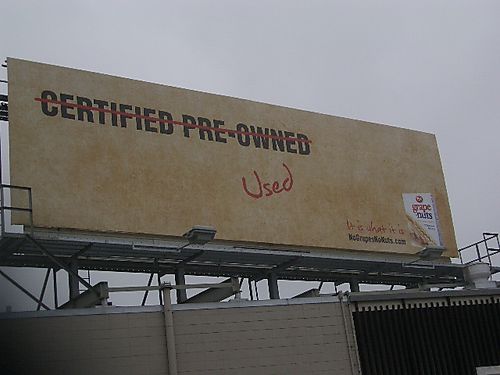 Because if I'd been toodling by at 30 mph I'd have either (a) thought it was graffiti of zero interest, or (b) been so distracted by "Certified Pre-Owned" vs. "Used" (meaning? and so what?) that I'd have missed what's going on in the lower right-hand corner.

You may need to click and enlarge to see the accompanying text: It is what it is in red, "hand-scrawled" type, and this URL: NoGrapesNoNuts.com.

Back so soon? Have you recovered from the vertigo induced by that gently oscillating background? Have you decided whether the site is too cool for a brand that's been around since 1898? Not cool enough? Did it make you hungry for a big bowl of NoGrapesNoNuts? Did it answer your questions about the product's name?

OK, I'll spare you the tortured self-questioning and the NoAffectNoInfo Web experience. Here's Straight Dope (from way back in 1982) on how Grape-Nuts got its name. (Short version: grape sugar, nutty flavor.)

Because what really interests me about this Grape-Nuts campaign is the slogan: "It Is What It Is." Which means ... what, exactly? No, it isn't grapes. No, it isn't nuts. It's ... what it is.

Now, Grape-Nuts may be the first brand to appropriate "It is what it is" for commercial purposes (is it? actually, I don't know), but I'd be deeply disappointed to learn that a copywriter was paid and attaboyed to create it. Because selecting "It is what it is" is like playing buzzword bingo in the office. Haven't heard someone say it yet today? Don't worry; you will.

Besides, there's something sort of defeated-sounding about "It is what it is" for a century-old cereal brand. You want excitement, stimulation, flavor? Sorry. Not gonna happen.

Covering the Congressional steroid hearings a few months ago for Slate, Douglas McCollam called "It is what it is" "a sports cliché for our times." Coaches and players wield it shamelessly. Politicians, especially the Bush gang, love it, too: it allows them to sound thoughtful without, you know, having to think. McCollam couldn't identify a single point of origin for the phrase, but found published citations going back to 1996. And much earlier: "Indeed, in An Essay Concerning Human Understanding, philosopher John Locke wrote that 'essence may be taken for the very being of anything, whereby it is what it is.'"

Just last week, also in Slate, Ron Rosenbaum tackled the general subject of catchphrases, observing that "our language has become more catchphrase-driven, catchphrase-focused. So much so that catchphrase self-consciousness has become a phenomenon of its own." I urge anyone interested in language to read the whole article, which covers a lot of ground and, like all of Rosenbaum's writing, is laugh-out-loud funny (as they say). Here, though, I want to focus on Rosenbaum's four stages of catchphrase use: from Stage 1 ("when you first hear a phrase and take pleasure in its imaginative use of language on the literal and metaphorical level") to Stage 4 ("terminal obsolescence, dead phrase walking"). "At the end of the day" is in the latter category, Rosenbaum writes:

It kind of stuns me whenever I find someone still saying "at the end of the day" with a straight face. What are they, stuck on stupid, as they say?

But there's a worse fate than Stage 4, and "it is what it is" is consigned to it:

And then there's the danger that arises when Stage-4, zombie catchphrases that have previously been confined to a subculture escape their niche. We recently saw this happen with "It is what it is," which used to be an all-purpose coach-speak sports-night cliché. But since then, it's broken out and become a wise-sounding but profoundly empty surrogate for wisdom and perspective all too often used by idiot consultants and talking-head political pundits who seek to make themselves sound both worldly and gurulike: "It is what it is." To which one wants to say, using a monosyllabic catchphrase that is a particular favorite of mine and deserves its longevity: "Duh."

At least "It is what it is" doesn't suggest that the is-ness in question is good or bad; it's just that you can't argue it doesn't exist. Is "It is what it is" pop existentialism, at once an acknowledgement of the tragic immutability of being and a challenge to us to "take arms against a sea of troubles," as some well-known guy once said? Or is it an Eastern quietism, a rationale for resignation?

...A lasting catchphrase often earns its longevity because it has some philosophical question buried in it that hooks us. "It is what it is" is something I struggle with: How much should I accept in an "It's all good" way? Much of the time I'd much prefer if "it" isn't what "it" is. That's my story and I'm sticking to it. As they say.

So put that in your bowl of cereal and chew on it. Myself, I like my Grape-Nuts au nuke: cover with milk, heat in the microwave for about two minutes. Tasty!

Bonus link #1: Andy Griffiths and Don Knotts in a 1964 Grape-Nuts commercial embedded into an episode of "The Andy Griffiths Show." You thought integrated advertising was something new? Hah!

I was briefly a waitress at a small New England chain restaurant (Memory Lane, anyone?), and I was well-known for my ability to convince people to order a dessert of Grape Nut Pudding. Andy still likes it, frankly.

I clicked your nograpesnonuts link, and then--as is my wont--I reflexively clicked the "skip intro" button. What a charming fellow! I still don't want to buy Grape Nuts, but if I were single, I'd date that guy (or his writers).

I'm still trying to work out what the billboard is trying to say. We don't have 'Grape Nuts' this side of the pond (well, I don't think so)... are they second hand in some way?

@Karen: I want that recipe.
@Orange: Chacun a son goût. I find myself wanting to slap him upside the head.
@John: Hah! No, there's nothing secondhand about Grape Nuts. The billboard is trying to say: we don't go for euphemisms like "certified pre-owned"; we tell home truths around here. But you shouldn't have to work that hard at decoding a billboard.

I saw this campaign this weekend all over SF. Variations include, "brunch" crossed out and replaced with a scrawled, "bloody marys."

I'm not so worried about the cliched-ness of "It is what it is." I'm bothered by how little sense the campaign makes.

The idea, I guess, is that we should see past euphemisms. So Grape-Nuts is a euphemism? For what? Flavorless, tooth-braking breakfast cereal?

@danthelawyer: I think we're meant to see Grape-Nuts as the anti-euphemism--the real thing. But you're right, the campaign seems to be saying that Grape-Nuts represents the harsh, unpleasant truth.

Nancy, it's nice to see someone else in the industry is just as stunned and disappointed about this campaign as I am. The billboards just popped up in Cleveland and I was shocked to find such a terrible billboard by Post, and I'm probably in the demographic! Check out my blog entry: http://felberandfelber.blogspot.com/2008/07/billboard-advertising-lessons.html

@Michelle: What do you think the target demographic is? I'm not sure myself.

By the way, judging by a Google search, I'd say you and I hold the minority view. Most folks seem to like the campaign--they find it "refreshing" or something. Go figure.

wow. lots of debate over a pretty simple, lighthearted and yes, clever idea. this campaign is for a cereal that barely eeks out 5 inches of shelf space in most grocery megastores. kudos to Post/Kraft and its agency for making it relevant again by reminding us how overblown and sugarcoated everything around us has become...and positioning the basic, no-frills voice of Grape-Nuts as the spokesbrand behind it all.

as for the demographic, I'm guessing it's aiming for those people who don't take themselves too seriously and favor a nice conversation with a brand over being spoken to like a 3rd grader about some random (and boring) product attributes that a brand manager thinks everyone needs to know about.

just my 2¢...since everyone else seems to be a little hypercritical here.

@JD: Glad to hear you're enjoying the Grape-Nuts campaign!

But to clarify: one of the purposes of this blog is to critically examine the language of advertising. There is *always* a subtext.

And my main point here and elsewhere is the appropriation of popular catchphrases for commercial use--in this case, "It is what it is."

Hi Nancy,
Grape-Nuts always appealed to the older generations. When I saw the billboard, the phrase caught my attention (other than the lack of sense). In watching the video with the not-so-cool guy, their target is the younger generation (20-30 yrs old). I can't believe we are the minority in this!

Interesting comments on the campaign. I would say this campaign worked great for me, I am not in the advertising or marketing industry. I do not have a degree in english or creative writing. I found this post while scouring the web, looking for more information on the actor and the grape nuts product after viewing their website. I am likely in what you are referring to as the target demographic however. No, I've never stocked my pantry with Grape Nuts. Yes, I will be taking a trip to the store this evening for one reason alone - to offer my buck to anyone who can create such an amazing message.