« Bloggiversary 2 | Main | Is Crowdsourcing a Good Substitute for Professional Naming? »

Word of the Week: Dap 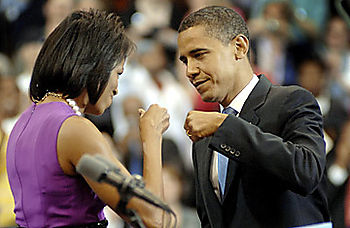 Dap: A fist-to-fist greeting, conducted as though the two parties are punching each other lightly. The word is both a noun and a verb; giving dap is also acceptable. The gesture made headlines and occasioned earnest analysis when Barack Obama and his wife, Michelle, bumped knuckles after the candidate's June 3 victory speech in St. Paul.

Jill Rosen, writing in the Baltimore Sun, traces the dap back to the black-power movement in the 1960s, and says the word is an acronym for dignity and pride. However, another meaning of dap goes back at least to the 1950s, when it was an abbreviation for dapper. The Random House Historical Dictionary of American Slang (RHHDAS) gives this citation from 1956:

The word now is dap. You want somebody to know a man is sharp, is au reet, you say he's dap.

That meaning persisted at least through the 1970s, when the "greeting" meaning began to be adopted. This Vietnam War glossary defines dap as "an elaborate, stylized handshake used mostly among black Americans in Vietnam." RHHDAS provides a 1983 citation asserting that dap means "beautiful" in Vietnamese.

A third meaning of dap is "credit where credit is due," also known as "props." Juba to Jive: A Dictionary of African-American Slang dates this usage to 1990s "southern and northern city use."

Back to the Obamas. Time magazine called the greeting a "fist bump," but noted that:

[T]he terminology used to describe the manual move is under dispute. On reporting Obama's speech, The New York Times described it stuffily as a "closed-fisted high-five" while Human Events racily suggested it was closer to "Hezbollah-style fist-jabbing,"(the phrase was later removed from the article). One Internet poster even referred to it as "the fist bump of hope." Other terms for the move include "power five," "fist pound," "knuckle bump," "Quarter Pounder" and "dap."

Journalist, blogger, and memoirist Ta-Nehisi Coates, in a post titled "The Sacred Art of Giving Dap," cringes at fist-bump and accepts only dap:

Black folks give each other dap in all sorts of instances--not just competition. I may give my man a "fist-bump" (arrrgggghh!!! it burns!!!) because my fingers are greasy, because I've got something in my hand, or just because I feel like it. In fact, one of the more awkward moments in black life occurs when two brothers greet each other and one isn't sure whether to use the open hand or the closed fist. You can end up with some pretty awkward exchanges--like shaking a dude's fist.

I didn't know the word for the knuckle bump greeting before. Great to know. It will be interesting to the impact of the Obama's doing the dap. Certainly less dramatic than the Gore's big kiss.

Crossword puzzles are so educational! I learned the word dap from an Onion A.V. Club crossword by Tyler Hinman in June 2007. He clued it as [High five cousin]. Tyler and I and our team were wont to dap when we had correct answers at bar trivia nights.

That is SO much cooler than Dubya's recent "chest bump":
http://tinyurl.com/6klq4n

@Karen: Isn't it great that the UK papers can get away with those snarky captions?

Apparently no one recognizes the fist bump as Howie Mandel's (Deal or No Deal) trademark greeting. Mandel is a germophobe and won't shake hands the ordinary way. His recent celebrity, and use of the dap on other TV shows and interviews, may be partly the reason for the resurgence of this particular gesture.

Watch the elbow. If the elbow is down and in, closer to the body, in position to throw a short jab to the shoulder with your head down a bit you're sending the signal that you are going to "dap".
If the elbow is out away from the body, as if you're going to throw a ball, then get ready for a "high five" as you pass. Practice in the mirror. You'll see. Others may be wandering about in confusion, but not you! (This post has been corroborated by three basketball playing teens.) (I got the lowdown from their mom at a pub last night)

"Au reet" (phonetic) is the greeting that, since time immemorial, one Yorkshire man has used to another. The response is either the same words returned or, "Yer, mau reet" (Yes, I'm all right).

What's all this 'Hepcat' nonsense?

@John: I don't know anything about Yorkshire dialect, but I do know this lyric from "A Zoot Suit" (1942):

HIM:
I want a zoot suit with a reet pleat
And a drape shape, and a stuff cuff
To look sharp enough to see my Sunday gal

HER:
You want a reef sleeve with a right stripe
And a rare square, so the gals will stare
When they see you struttin' with your Sunday pal

@Barry: I obviously don't watch enough television. Thanks for the great observation!

I guess there's 'reet petite' as well. In Yorkshire dialect; 'reet', meaning 'right', meaning 'really'. I suppose the hepcats must have got the word from somewhere?

As for "RHHDAS provides a 1983 citation asserting that dap means "beautiful" in Vietnamese.":

I'm living in Vietnam now, and "beautiful" is actually pronounced "dep" in Vietnamese (spelled as "đẹp"). So I think they got that part wrong.