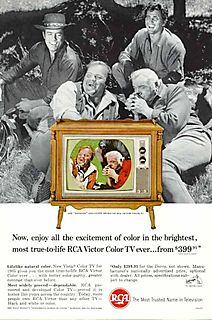 During last month's trip to Los Angeles I continued to sort through the contents of my parents' house, as previously documented here. And I continued to find museumworthy artifacts of American commerce, thanks to my parents' meticulous archiving (what others might unfairly term "hoarding").

Case in point: the paperwork for an RCA Evanger New Vista 25" color TV. According to the receipt--preserved in a plastic bag along with the manual, the schematic, the product tag, and an insert announcing "an important new space-age development"--my parents bought the set in 1966 for 175 books of Blue Chip Stamps.¹ That particular TV was eventually replaced by a slightly more contemporary set (with a newfangled gizmo called a remote control), but the old documents were faithfully preserved.

The RCA documents capture a moment in history when technology was miraculous, advertising was free of irony, and average Americans had attention spans that allowed them to follow sentences of more than six words. By today's standards, the RCA documents, like the magazine ad reproduced here, are unacceptably verbose, filled as they are with long, well-constructed sentences set in eyestrain-inducing eight- and nine-point type.

The writers enlivened their long copy with a variety of gimmicks. Color television was still enough of a novelty in 1966 (and an expensive novelty at that--this set cost about 75 percent of the average U.S. worker's monthly salary) that copywriters felt it necessary to use italics and capital letters to drive home their points, e.g.:

I hope you appreciated the semicolon in that last sentence. I certainly did.

I noticed something else about RCA's writing style: the generous use of quotation marks in contexts other than actual quotation. I had thought this phenomenon (some call it abuse) was of much more recent vintage, as evidenced by the "Blog" of "Unnecessary" Quotation Marks, which amply documents contemporary "infractions" (irony intended). But no; RCA's writers were clearly enamored of superfluous quotes more than 40 years ago.

It's a tiny "chip" of silicon incorporating matched transistors, resitors and diodes. ... In the electronic systems of space vehicles ... these new micro-circuit "chips" have already proven themselves in spectacular fashion. ... RCA Solid Integrated Circuits are the latest in a series of RCA Victor advances over old-fashioned "hand wiring."

And here's an example from the operating instructions:

If circuit breaker continues to "kick out," turn receiver "off" and contact your serviceman.

Scholars call quotation marks like these scare quotes; they're considered acceptable when used to express the writer's distance from or unfamiliarity with a subject, but unacceptable when used merely to draw attention to a term. In his blog Lexicographer's Rules, Grant Barrett renames them shout quotes, thumbs his nose at the rules, and gives them an enthusiastic shout-out:

(Judging from his commenters' responses, you'd think Barrett was endorsing the broiling of fetuses on a spit.)

What's interesting to me are the many ways in which the RCA writers used attention-drawing quotation marks. In the first example the quotes emphasize how exotic silicon chips were in 1966--so exotic that if you didn't put quotation marks around "chips" readers might think the word was a typo. The quotes around "hand wiring," by contrast, emphasize the opposite: the laughable quaintness of your old pre-silicon black-and-white TV. "Kick out" was clearly jargon; the quotation marks told non-technical types that here was a term they might want to learn if they wanted to sound in the know. And the quote marks around "off" do what grammar gurus say they never should: add emphasis to the word.

Technical writing today seems much less solicitous of consumers' tender sensibilities. I have an entry-level color printer whose manual addresses me imperiously:

You cannot change this setting on this machine. Selections of this setting will be based on that of the PictBridge compliant device.

Uh ... sure. And heaven help me if I'm just getting started with computers and digital photography and don't know what JPEG, TIFF, or Bitmap mean. I won't get any help from the manual. Frankly, a few scare quotes here would not have been out of place.

¹For you young 'uns: Blue Chip Stamps and their primary rival, S&H Green Stamps, were the buyer-rewards programs of the 1960s and 1970s: with every purchase at a supermarket or gas station, you'd get a few stamps to paste in a book. Completed books could be redeemed for products selected from a catalog. My father had a little side business--of questionable legality--buying stamp books from gas-station owners, small-business people, and average Joes who needed some quick cash. Dad paid something like 10 percent of the stamp books' redemption value and then exchanged the books for household gadgets; it was a family joke that everything in the house was acquired with stamps. But Blue Chip Stamps was no joke to legendary investor Warren Buffett, who began buying the company's stock in 1970, when Blue Chip had sales of $126 million. In the 2006 Berkshire Hathaway annual report, Buffett wrote: "When I was told that even certain brothels and mortuaries gave stamps to their patrons, I felt I had finally found a sure thing." It was one of very few times when Buffett was proved wrong. By 2006, Blue Chip Stamps revenues had fallen to $25,920 for the year.

For my entire childhood, I referred to the main knob on the TV as the "onvol."

omg, Green Stamps. To some extent my mother's grocery-shopping life revolved around getting those. And then we kids had to lick the stupid things and paste them in the books.

re: scare quotes. I guess I disagree about the quotation marks around "chips"; those seem ok to me, given the context. I think the use of the term was so new that it still warranted some danger!-possible-confusion-ahead markings. This was well before PCs, of course, and even before (if I remember right) everyone had calculators.

What I love is the elaborate instructions for how to turn the volume knob. And the "warm up" aspect of the TV -- 30 seconds to get that thing humming! Dang.

@Mike: I also think the quotes around "chips" are OK, and for the reason you cite. To the average TV owner in 1966, a chip was something you ate while *watching* TV. Silicon was just one more thing to memorize on the periodic table of elements.

In 2001 S&H Green Stamps became S&H Green Points; instead of getting stamps, you could swipe a magnetized card. Here's a link to an NPR story that called the company "a 105-year-old dot-com startup": http://tinyurl.com/4nzq7u

Aha! Maybe I can blame early 60s product manuals for my father's addiction to scare quotes. Why, any minute now I expect an email from him thanking us for our "hospitality" during their recent "visit."

Thanks so much for this article. I must admit that I'm a "scare quoter" -- as you can plainly see from this sentence! I will try to reform....

Here's a joke (for people who can remember gift coupons) that was told to me by an elementary school kid (my godson) in the early '80s (do the math for an appreciation of how impossible it was for him to understand the joke he was telling):

As Jesus carried the cross from station to station, he bent lower and lower under the weight. Finally he was bent so low that a pack of Old Golds fell out of his breast pocket, and the centurion guarding him picked it up.

"Of course," Jesus replied. "How do you think I got this lovely cross?"

As to the scare quotes problem, I agree with others here that their usage in many (okay, not all) of the cases you cite, like the chips, signaled a recent coinage the reader may not have been familiar with and wasn't superfluous in time-context. I used them a year ago, when I "back-formed" (I could stop right now, there's another perfect example) a verb for "referendum". In my city a bunch of people have banded together to fight our corrupt council, and we're forced to pass referendum petitions to voters to get their decisions put on the ballot to be sustained or vetoed. You can't keep saying "circulate a referendum", so what IS the verb for that (it comes from "refer", of course, for "referring an ordinance to the electorate", but if you're gonna use it a lot you need something more concise.) I didn't know, and people have perforce tried lots of coinages as we've emailed back and forth. In one email, I wrote: "I guess we're gonna have to 'referend' the term-limits vote too." It has a similar function to "sic": it showed I knew I was using a word that wasn't standard.