Mark Gunnion forwards a link to his favorite new product name: the Looj™ remote-controlled gutter-cleaner from iRobot. Yep, it shoots down your gutter just like a little luge and "blasts out debris, clogs and sludge." Comes with a handy holster, too!

Christa Allan thinks someone should have paid closer attention to the way this domain name looks: http://goredforwomen.com. "The campaign is to draw attention to women's health, specifically heart problems, by wearing red," Christa writes. "I suppose being gored for women is the ultimate sacrifice." (¡Olé!) For more insights into unintended parsing issues (remember Pen Island?), check out Tate Linden's post on Putincups.com.

"The umlaut is officially no longer hardcore," declares Dan Holbrook, who blogs at Language Is the People's and therefore knows about the heavy metal umlaut (aka "rock dots"), as in Mötley Crüe. He forwards photographic evidence: 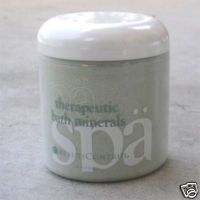 The Spä line is made by a company called BeautiControl, which does sound a tad Teutonic. (Photo swiped from eBay.)

Judith K. thought I'd like NuttyBuddy, which she discovered while shopping for equipment for her adolescent son. She was so right. NuttyBuddy's tagline is "Protecting the Boys"; its product is "the first athletic cup that was designed to protect the full groin area of the male body." You've got to love the "size tool" that tells you whether to order "The Hammer," "The Boss," "The Hog," or "Mongo."

Jan Freeman, who writes about language for the Boston Globe, is amused by an ad she saw in the New York Times for a jewelry store on Fifth Avenue. "The headline is 'My Kingdom for your Old Jewelry,' from, of course, Shakespeare's libellous play about the last of the Plantagenets, Richard III. The picture is a portrait of Henry (Tudor) VIII, son of the Henry whose rebellion killed off Richard and his line. The name of the store is Windsor Jewelers Inc.--and though Windsor is old, it wasn't a royal name till the Saxe-Coburg-Gotha royals decided WWI was a good reason for the name change."

Jan adds: "Perhaps I was sensitive to this because I just finished reading Josephine Tey's classic pro-Richard III mystery, The Daughter of Time. But I would think many a Shakespeare fan would notice the odd juxtaposition. Or am I too optimistic?"

By the way, I highly recommend Jan's Sunday columns, which examine newsworthy issues such as the spurious origins of the phrase "belly up to the bar."

Posted at 10:28 AM in Advertising, Domains, Naming, Umlaut | Permalink

I think "he-cups" pronounced, "hiccups" would be the best name for a male bra. So male world leaders would have more to talk about than war, you know , give them something in common to talk about. "I got my he-cups in China How about you?"

This blog is a feast! Thanks!
Check out the rest of the iRobot site. Under Government and Industrial robots you can find : Helping "warfighters" and "first responders". These robots pack a lot more punch than gutter cleaners. Make sure you get the right model when you order. Don't want to blow away the neighbors BMW while trying to get rid of unwanted leaves. Then under ,Careers, you can find: "Our Mission" ; build cool stuff; deliver great product (no 's'); make money; have fun; change the world. And ....they all wear the same color polo shirts. Oh,oh.... wasn't this a comic ? or was it a movie?

Oh, at least the NuttyBuddy people stayed clear of using "Snickers" as a size description.

@Kelly: I love that line of dialogue in "Blazing Saddles" when big bad Mongo (played by Alex Karras) first threatens the town. One of the terrified citizens says with semi-religious fervor, "Mongo! Santa Maria!"