I've been collecting photos of "Mr." brand names for more than a decade. (Not names like "Mr. Brown's Restaurant"; the formula has to be Mr.+ Product or Mr. + Service.) I was inspired to begin the project when a friend pointed out a Chinese restaurant on San Pablo Ave. in Berkeley called Mr. Eggroll. The "O" in "Eggroll" had fallen off, and all the remaining letters appeared to have been handcut from white sticky tape, but still--you had to admire that plucky honorific and applaud the attempt at dignity. (Both the friend and the business are now defunct, alas.)

I went on to document Mr. Lumpia X (a take-out place in San Francisco specializing in the Filipino specialty called lumpia; I have no idea what the "X" stood for), Mr. Hot Dog Rancho Burgers (confusing, yes, but a very handsome sign: Geary Blvd., San Francisco), Mr. Convenience (a Japanese store on Mason St. in San Francisco; "Mr. Convenience" was the only English in the sign), Mr. Sushi (Grand Ave., Oakland), and the unabbreviated Mister Softee, the ice-cream-truck franchise in New York and the Northeast.¹ Except for Mister Softee, none of these businesses appears to have survived. All of the photos are from my pre-digital period and thus unavailable for posting; one of these days I'll have them scanned.

Meanwhile, here are some current examples of Mr. monikers.

I shot this San Francisco establishment in 2005. But this photo, from the Yelp review, gives more context: 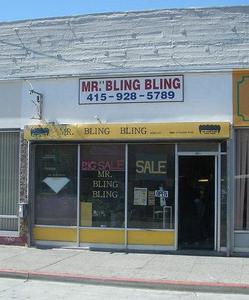 There's a #1 in the sign because there's also a #2 store, in Hayward. And the bling-bling in question is the kind you have installed in your mouth. As one satisfied customer put it on Yelp: "Listen, at some point in your life you may need to buy some gold teeth, and when you do, Mr. Bling Bling will be waiting like a prodigal friend. Seriously, this is the place." 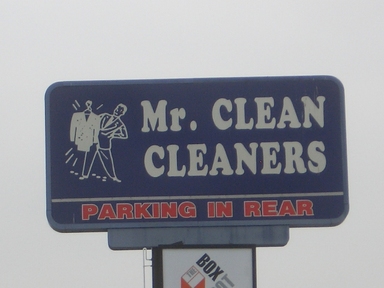 Quite the dapper gent, eh? He's not to be confused, of course, with Mr. Clean®, a registered trademark of Procter & Gamble: 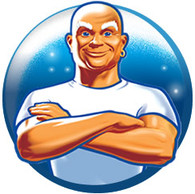 This Mr. is also in Los Angeles, on Santa Monica Blvd. near Western Ave.: A coffee wholesaler in downtown Oakland, near Jack London Square: 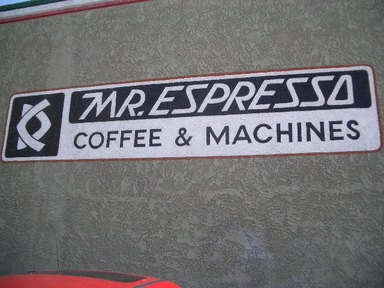 I love that snazzy streamlined font. However, the company's logo on its web site is completely different. Time to hire a sign painter? 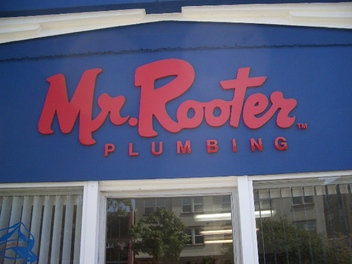 On University Ave. in Berkeley. Another fine retro typeface. I'm indebted to one of the Messrs. Rooter for his heroic efforts in removing a small forest from my sewage system a few months ago.

Anybody out there have a favorite Mister?

¹ "Mister Softee" is also stockbroker slang for Microsoft, whose ticker symbol is MSFT.

It's not a business, but in the Achewood webcomic Nice Pete once formed a band called Mister Band: "It is a good, honest name that people can believe in."

I used to have a plant sprayer called Mr. Mister. :-)

Chicago once had a Ms. Eggroll. The carryout menu was delightfully rife with errors. "Ms. Eggroll is the best for your choose" was the motto on the front of the menu.

I wonder if there's not a niche book seller out there focusing on detective novels and going by the name "Mr. Rious"?

It does raise questions about the distaff representation as there's hardly a "Mrs." for every "Mr." Off the top of my head branding-wise I can only think of Mrs. Paul's and Mrs. Field's, both of which are food-oriented and implicitly nurturing, neither of which meet the "Mrs" + Product/Service construction. Where is Mrs. Fixit? Mrs. Clean? Ms. Taxidermy?