« Signs from the Mysterious Southland | Main | Plum: The New Black? »

The Friedman Museum of Vintage Products

My parents bought their house in 1968; since my father's death two months ago, my brothers and I have been sorting through the contents--an emotional task made especially daunting by the fact that both parents were champion Keepers. We've found receipts dating back to the early 1950s, multiple photocopies of trivia quizzes from Elderhostel trips taken almost 20 years ago, and unopened packages of twin-size cotton-polyester sheets in perky floral patterns from the late 1960s.

And last weekend, on an expedition into the deep recesses of the walk-in pantry, my brother Michael discovered more artifacts. 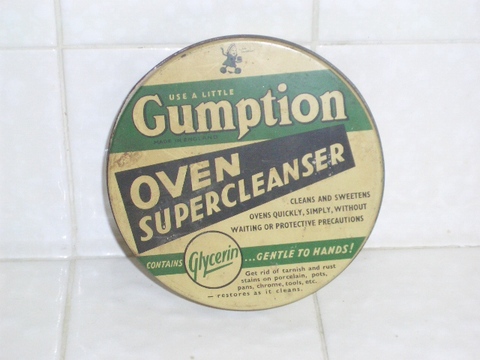 I don't remember ever seeing this can or hearing of this brand. Right under the "Gumption" product name you can just barely see the line "Made in England." But someone evidently Americanized the copy on the reverse side, which includes the words stove and aluminum. In Britain they'd have been cooker and aluminium. That aside, what a great name and what a fabulous use of type! I counted seven fonts, but I may have missed one. Though it's difficult to discern, at the very top there's a cartoon mascot whose head is shaped like a scrub brush. That's "Little Gumption" himself.

Gumption was apparently acquired by Clorox, which continues to sell it in the United Kingdom.

I wasn't familiar with this product, either: 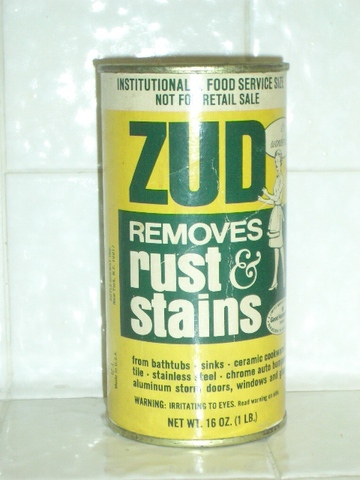 From the looks of the spokesmodel drawing, it dates from the early 1960s. At the time, Zud was manufactured by Boyle-Midway in New York; the company was later acquired by American Home Products, which sold it in 1990 to British household-products giant Reckitt Benckiser. And whaddya know: you can still buy Zud, albeit with a snappy new logo. The product must be really good to have survived such a leaden name.

I definitely remember Peter Pan peanut butter, although not necessarily this 28-ounce can: 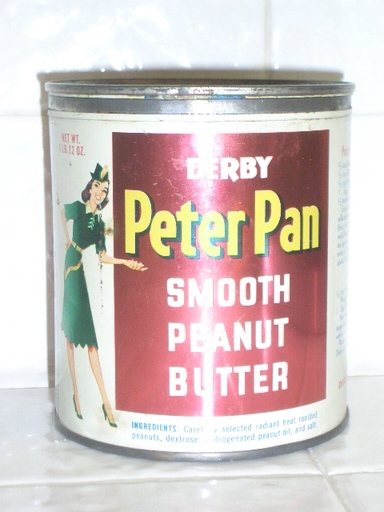 According to a Wikipedia entry, Peter Pan peanut butter was introduced in 1920 by the Derby Foods division of Swift & Company under the name "E.K. Pond." That may have sounded uncomfortably close to Pond's cold cream (introduced in 1914); for whatever reason, the peanut butter got its current name in 1928. You opened the can with the key that you detached from the base. (In a kitchen drawer, Michael and I found a small collection of peanut-butter-can keys.) The Wikipedia entry says that cans were discontinued during World War II because of metal shortages, but this design appears to date from the late 1940s or early 1950s. Wikipedia jogged my memory about a Peter Pan slogan: "Picky people pick Peter Pan peanut butter, it's the peanut butter picky people pick."

The Peter Pan brand is now owned by ConAgra. It was the subject of a 2007 recall because of a salmonella outbreak.

Finally, this bit of paper packaging, saved for who knows what reason: 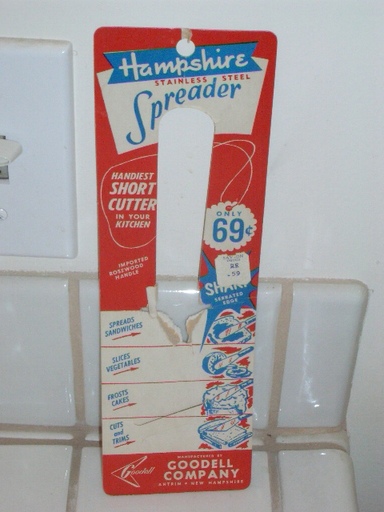 The futuristic logo (and the pricetag from Fedco, a consumers' cooperative where our family frequently shopped) would seem to date this package from the early 1960s. Again: amazing use of typography. The Goodell Company of Antrim, New Hampshire, was established in 1875; besides the Hampshire Spreader, it also made the Perfect Pencil Pointer, a pencil sharpener. The Antrim website mentions the company in passing and includes this poignant paragraph about the town:

Today most farms and factories are gone. Some of the mill buildings still stand, but they are no longer used for manufacturing, The schools and Frameworks are the largest employers. Most townspeople work in bigger surrounding towns like Peterborough and Hillsboro.

And most of the utensils used in American kitchens are manufactured in China.

My parents didn't hang onto these products because of their nostalgic design. I'm sure they believed there was some useful life left in them. The Gumption and Zud were still part full; the Peter Pan can served as a container for paper clips and such. The cardboard spreader package? Possibly saved as a reminder of the bargain price.

But I started wondering: Is there any current consumer packaging that I treasure enough to save? How about you?

The key for the Peter Pan can -- is that like the keys they used to have for sardine cans?

Anyway, I keep an old 7-oz green bottle of Coca-Cola around. I think they're still made, but they're rare, and it's still (to me) one of the sinuous package designs ever.

Altoids tins, of course. Although I'm trying to train myself to throw them in recycling - you only need so many. I feel the same about the Traveler's Chocolate tins (available full of chocolate from Trader Joe's). But what I'm probably most nostalgic about are film canisters. We love to store quarters in them, and always have at least one in each car for those times you need them for the meter. And they're getting harder to find. We don't buy film anymore....

Fedco! I remember going there with my grandparents all through my childhood. I remember when they tore down the one in my hometown and refurbished the mall it was located in.

This is more ephemera than old packaging, but it was the first thing that sprung to mind when you asked for consumer packaging we might treasure. My grandmother just cleaned out and sold my grandparents' RV, and ended up passing on to me a lot of the tools and tupperware they kept in it, including an old rolling pin that she'd kept wrapped in one of those little white bags the baggers used to wrap ice cream and stuff in at the grocery store. The bag must be from the 1980s--it advertises "Old-Fashioned Western Family Ice Cream", which I haven't been able to track down a vintage for. Though I have no reason to keep re-wrapping the rolling pin in it, I keep doing it anyway, every time I use it.

My parents were born in the 1920s, grew up in the 30s and went to war in the 40s.
At first my siblings and I thought that saving things was the result of liking those things. Later we figured out that growing up in the thirties meant saving things for survival. Every penny or package could be your last. Then the war come along and saving things became a religion. Save the boys over there by not using valuable materials. Saving became a force of habit.
After cleaning out my grandfathers house,which included :a large dresser drawer filled with old pocket knives, another with broken watches, a barrel of used nails in the garage, hundreds of other collected items;I realized the method of carefully collecting and saving things became more important than the things themselves. Waste not want not.
The products themselves are like old photos found at the bottom of a closet. We can't resist looking and wondering.

Mike: Yes, the key is similar to old sardine-can keys (sardine cans now come with pull tabs), but--if I recall correctly--with a narrower slot. On the peanut butter can, you removed only a small strip around the circumference so you could replace the lid.

Erin: We found one of those freezer bags in my parents' pantry. Love the graphics. Good news: the bags aren't obsolete. My local grocery store (Piedmont Grocery) still stocks them. Similar design, too: cartoon boy rushing home, smiling happily, ice cream safely insulated. As for Altoids tins, it's hard to believe they'll ever disappear: the brand has been around for more than a century.

Hey, I use(d) Zud! It helped me get back many a security deposit in my single days!

I know what you mean about unpacking the packrats. My grandparents were born between 1915 and 1920 and the motto for their generation was "Use it up, wear it out, make it do or do without." They saved everything, especially my grandmother. (Here's how I described the unloading when she moved to the nursing home: http://thenightwriterblog.powerblogs.com/posts/1153279168.shtml)

As far as collectible packaging, is there anything to rival Cool Whip (and similar) containers? Behold these noble and utilitarian holders of leftovers, small hardware and the dog's water! Future archeologists will find these and use them themselves to organize all the "stuff" they uncover.

Finally, the Peter Pan jar reminded me of the time back in the late '60s when PP hired Alan Seuss from the "Laugh-In" show to play Peter Pan in their commercials. I've sometimes wondered, in retrospect, what the company was thinking when they hired this six and half foot tall, flamboyantly effeminate actor to prance with children through commercials in tights, tunic and elf shoes - pretty avante garde for 1968 (or whenever). Perhaps this led to Jif creating their own competitive slogan - "Choosy mothers choose Jif!" I don't think that Alan lasted long in the role.