« Word of the Week: Racino | Main | The Friedman Museum of Vintage Products »

Signs from the Mysterious Southland

You are driving 35 miles per hour on Santa Monica Boulevard near La Cienega Boulevard in West Hollywood when you see this large sign: 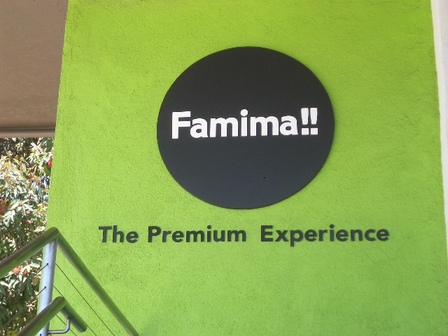 A. A belly-dancing academy.

B. A cosmetic surgery clinic specializing in the rejuvenation of lady parts.

The correct answer is (D) None of the above. If you're curious enough about the sign, as I was, that you find a parking space, cross either of the very busy boulevards, and zoom in for a closer inspection, you see this: 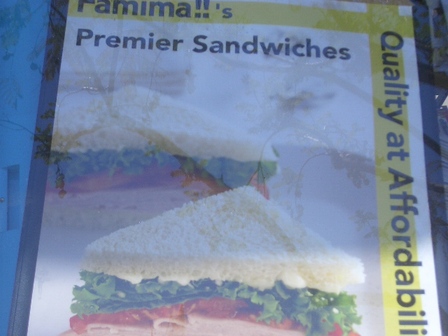 Kind of downmarket-looking for a "premium experience." And "Famima" strikes me as too perilously close to "famine" to suit a sandwich joint.

The big green sign also displays a URL, which I neglected to photograph. When I got to a computer and searched for "Famima," I discovered the Japanese parent company's website, in Japanese. Famima USA is a little more helpful: I learned that the company has 13,000 outlets throughout Asia, and that Famima USA was established in 2004. The "Famima!! Difference" amounts to "redefining the convenience store." For example:

We don't just have soup, we have soup!!

As for the name, here's the official story:

About 35 years ago, Famima!! started in a small Japanese neighborhood as FamilyMart. In fact, the name Famima!! comes from an abbreviation of FAMIlyMArt. Since then, FamilyMart has remained virtually the same, offering fresh goods, a selection of grocery items and popular quick-foods that can be eaten on the run or taken home as a meal.

"Famima" may sound yummy to a native speaker of Korean, Thai, or Japanese, but like several other imported names, in English it's ... not so good.

Ooh, Nancy, you missed their Steamy Buns campaign in March (http://www.famima-usa.com/events/index.html). Gosh, I hope they do it again!!

I am so obsessed with the inexplicable juxtaposition of their "Premium Experience" and "Premier Sandwiches," however, that I don't yet have the time to obsess over how to pronounce Famima, with or without double exclamation marks!!

At the very top of the second photo, did you catch the double exclamation point followed by a possessive? " Famima!!'s "

Looking at the photograph, my first guess was that it was a restaurant or take-away, and if I encountered such an establishment I would assume the name to be perfectly deliberate. Potential customers see a word that looks like famine and are prompted to think, "yes I am feeling rather famished, now you come to mention it, and I would like some food". The same psychology is used often enough by other establishments (e.g. Hungry Jack's http://en.wikipedia.org/wiki/Hungry_Jack's ), and it makes perfect sense. I don't agree with you that "Famima" is an unsuitable name in English for a food establishment.