It's Not As If It's Carved in Stone 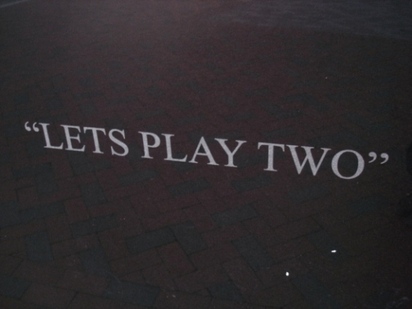 On Monday, opening day, the Chicago Cubs unveiled a new statue at Wrigley Field of the great infielder and slugger Ernie Banks, "Mr. Cub" himself, whose most famous quote is: "It's a beautiful day for a ball game. Let's play two!"

That's "two" as in two games, a doubleheader.

And "let's" as in "let us." The apostrophe pinch-hits for the missing "u."

Sculptor Lou Cella, a lifelong Cub fan, spent three and a half months making the clay sculpture for the statue, according to the Chicago Tribune. Then he oversaw the transformation of the sculpture into a seven-foot-high bronze statue and carved granite base. During that whole time, it seems that no one bothered to give him the correctly spelled quote. And no one--no one!--thought to hire a proofreader.

"I'm the sculptor, I'm not a writer," said Cella, sounding good-natured. "I just read it the way I heard it in my head."

The Cubs swung into action Tuesday. The Sun-Times reported that it took a stone carver "about 30 minutes" to insert an apostrophe into "Let's."

There is joy in Mudville.

And also kibitzers. Yale's Lawrence Horn quipped on the American Dialect Society's mailing list that "Mr. Cella and his staff no doubt obtained their apostrophe at cut-rate from a nearby statue promoting Taco's and Burrito's."

And Ben Zimmer, posting at Language Log, passes along an observation from graphic designer Andy Pressman: "That's still not an apostrophe--it's a foot mark."

It's true. You could look it up.

Posted at 10:36 AM in Editing, Punctuation, Sports | Permalink

A Case for "Lets"
Is it possible that "let's" is becoming a word by itself, "lets"? What I mean to say is that if we look at, "let us" and see when it's used ;then it appears that,"lets" and "let us" are not easily interchangable . Lets dance. Shall we dance? Lets have dinner sometime. Why don't we have dinner sometime? "Lets" presents a polite question
"Let us", seems to be more of a command. "Let us pray." "Let us not forget...." "Let us have peace." sound like proclaimations from a pulpit." Let us eat lunch."sounds like , We will eat lunch now." "Let's eat lunch." sounds almost manic in comparison.
Contractions in tag questions sometimes end up like this. Such as: "isn't".
"Is not that your hat?" is almost gibberish, while, "Isn't that your hat?" is perfectly understandable
The word "let's" may be trying to break away from it's dogmatic parents by throwing away its apostrophe.
Nick

(And none, by the way, in "its dogmatic parents." Possessive pronouns don't take apostrophes: hers, his, theirs, ours, its.)

There have been attempts over the years to do away with apostrophes in contractions. George Bernard Shaw, a big proponent of spelling reform, omitted apostrophes and invented some simplified spellings. Alas, although he was successful at many things, he failed in this endeavor. Today, apostrophe-less contractions are used mostly for a particular effect: to portray the speaker or writer as, shall we say, undereducated.

I don't (or dont) want to get into a prescriptivist/descriptivist debate here; I merely wish to point out that much punctuation serves a useful purpose: it clarifies written communication. "Lets" is the plural of "let," a noun used in tennis. "Let's" may seem archaic to you, but it's perfectly clear to me.

Here's a link to an overview of an interesting debate on punctuation:
http://grammatically.blogspot.com/2008/04/great-punctuation-debate.html

At the end, blogger Martha Brockenbaugh observes:
"Dr. Marshall [representing one side of the debate] at least doesn't argue that apostrophes are useless, as other professors of English have done. Anyone who thinks apostrophes don't make a difference in meaning is in denial. He'll and hell are entirely different concepts. Hell, to us, is a place without thoughtful punctuation."

Before I wrote this reply I checked out the blog site mentioned. Clearly proper punctuation is needed.I stand rightly corrected.
Then I decided to go a little further and checked out "quotes". What I gathered from two or three sites was that quotes are fairly serious business as they contain others words, not our own. The punctuation needs to be kept the same to preserve the original meaning and any changes need to be noted on the same page. The persons name ,whose words we are using, needs to be mentioned before or after the quotation. After that I checked the photo of the entire statue. Then I stopped...
All I saw was an ugly square block of black stone with eleven capital letters in quotations. Then it really hit me. What a classless,heartless, hack job. Did anyone ever consider asking Ernie Banks what he would like to have written beneath his own image? He "is" still alive.
If I were in charge of this project, I would take my Cubs cap in hand and go the great, humble man and say this: "Mr. Banks, I'm sorry to bother you but our temporary base will be removed soon and we have here designs for different three bases and three different inscriptions. ( I would make sure that all the designs and inscriptions were worthy of the man.) Please choose what you'd like , Mr. Banks, or let us know how you'd like them done. It's really no problem at all."
Nick

Apostrophe use has never been consistent. As the Oxford Companion to the English Language says: "it appears from the evidence that there was never a golden age in which the rules for the use of the possessive apostrophe in English were clear-cut and known, understood, and followed by most educated people."

"hell" and "he'll" are different concepts, and they'll continue to be different concepts no matter how they are spelled. I'm not saying they should be spelled the same (I'm not into telling people how to spell). But don't confuse punctuation with thought.

Goofy: I'm looking at the Chicago Manual of Style, 15th edition, which says that acronyms (DVD) and decades (1980s) do not require apostrophes when pluralized. The only plurals that take apostrophes are single letters when confusion is likely (dot your i's; mind your p's and q's; BUT "the three Rs"). There are a handful of exceptions, such as "maybe's" ("I counted three yesses, four noes, and seven maybe's").

The Oxford Companion to the English Language has a different opinion of what is standard. They imply that the use of the apostrophe for the plural of some kinds of nouns is a continuation of its former widespread use as a plural marker.

Trivia. When I went back to see what the artist had said about why he left out the apostrophe from let's, I found this statement from Lou Cella, "I just read it the way I heard it in my head." How did he "read" what he "heard" ? Now if he had said ," I wrote what I saw in my head." We can assume that he may have seen or not seen the punctuation. The only way that could have happened is if the voice in his head used phonetic punctuation. That brought to mind Victor Borge and phonetic pronunciation. I found " Victor Borge and Dean Martin , Musical Phonetic Pronunciation" on You Yube and " Phonetic Pronunciation" on the Tribute to Victor Borge site. have fun!
Nick

I wrote about Victor Borge and Dean Martin here: http://nancyfriedman.typepad.com/away_with_words/2007/05/to_the_point.html

As to Goofy's point about the OED: we use style guides very differently from dictionaries. A dictionary gives us a picture (some would say a kinescope) of the language; a style guide tells us which of the many options in the dictionary is acceptable and appropriate right now. The Chicago Manual of Style is the bible of the publishing industry not because it provides the One True Answer but because it provides the Answer That Works. Without it, editors would waste huge amounts of time making it up as they went along, and clarity would suffer.

I understand the difference between dictionaries and style manuals. My point was "apostrophe use has never been consistent" and "apostrophe use has little to do with clarity" and I thought to make this point by quoting from the OCEL about how it is still standard to use the apostrophe for the plurals of some kinds of nouns. I don't mean that it's accepted by everyone, I mean that it's a trend that is still in use by educated writers. I still don't see any evidence that these various uses of the apostrophe are impeding clarity.