I mean that question literally: what story is the design telling?

Let's take a closer look at the graphic element:

One boy, one girl. From the looks of it, they met on the door of a public restroom. He's standing rigidly; she's leaning against him, one knee bent in the classic swoony pose immortalized by Alfred Eisenstaedt in his famous V-J Day kiss photo for Life magazine:

At least in the photo the guy is doing something. In the Match.com logo, he's static. But that's doesn't seem to trouble Green Gal, who appears to be swept off her feet (or off one foot, anyway).

Here's a more recent take on the same pose. This one's from a recent "Modern Love" column in the New York Times: 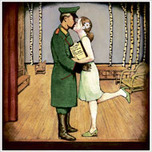 And you've surely seen countless other versions of this clinch in movies and on TV: the man firmly rooted, the woman swaying giddily on one foot while the other foot dangles in mid-air. You can imagine her saying breathlessly, "My hero."

That may be what she's saying. But what is Match.com saying? That the ideal match--the one you are shopping for right now--is one between a stolid male and a dependent female who doesn't just stand by her man--she leans on him for support?

That's how I read it. And I find it troubling--not least because it belies Match.com's home page copy, which touts the dating service's "global, diverse community" for "young and old, gay and straight." Oh, really? The logo is unambiguously hetero (not to mention retro), perhaps in a bid to trump competitor eHarmony, which famously refuses to provide matchmaking services for gays and lesbians.

Previous Match.com logos omitted any representation of people. This one, designed by Raspberry Media, dates back to the mid-1990s, when Match.com was founded:

The next logo incorporated a new tagline:

And as recently as 2006, Match.com was using the simple wordmark shown in this screen shot: 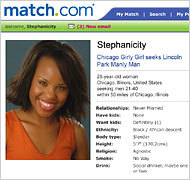 I've been thinking about male and female stereotypes more than usual lately, having recently read Susan Faludi's latest book, The Terror Dream: Fear and Fantasy in Post-9/11 America. The title is slightly misleading: as in her previous books, Backlash and Stiffed, Faludi writes here about American men and women and their culturally defined roles. In periods of crisis, Faludi writes--the early colonial era, the westward migration, the 9/11 attacks--Americans turn reflexively to a myth that depicts men as stalwarts and women as ninnies. When necessary, we rewrite reality and print the legend. Daniel Boone, who in real (18th-century) life got along pretty well with neighboring Indians, was transformed into a fierce Indian-killer in increasingly fanciful written accounts. Likewise, 21st-century New York City firefighters who admitted to being afraid during rescue attempts were edited to sound like "heroes." Women who actually performed heroically--the United 93 flight attendants who boiled water to hurl at terrorists, for example--were simply written out of the story. Public macho posturing (as exhibited by, say, a brush-clearing president who issued ultimatums like "dead or alive") was applauded, and feminism was declared inappropriate, distracting, and defunct.

Six and a half years later, we're still seeing a strained effort to maintain this fiction. In the run-up to Tuesday's primary elections, how many times did you hear John McCain called "a hero" or "an American hero," as if that were his sole qualification for leadership? (What's next--Batman for president?)

I'm guessing that Match.com got hold of some research that said there's big money in "traditional" sex roles: men as defenders, women as defenseless. Sorry, but that doesn't connect with what I know about the way real men and real women regard each other these days. In fact, a quick scan of current dating-site profiles written by men and women in their 20s and 30s reveals that they want--random sampling here--"someone who can hold their own," "an equal partner," and "no princesses."

So I'd call this design concept a bad match. In fact, I'd call it--there's no other word--sexist.

That's so disappointing! I owe a lot to Match (which led me to my darling boyfriend), but I would have thought twice before signing up with them a year ago if they'd had this logo then. Their solid, simple logo was attractive (and so NOT eHarmony) before. Argh.