« Mismatch.com | Main | Fritinancy Is the New Away With Words » 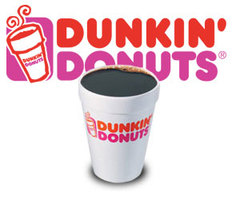 I was listening this morning to post-election analysis on Forum, a call-in show on San Francisco NPR affiliate KQED-FM, when I heard Democratic consultant Chris LeHane say that Hillary Clinton had picked up votes from a voting bloc he called "Dunkin' Donuts Democrats."

I'd never heard this expression, so I did a Google search ... and came up emptyhanded. It's possible LeHane may have invented it on the spot; he does have a way with words. (I also heard him call President Bush's poll numbers "sub-Nixonian.") Or maybe it's just too new to have made it into print.

Whichever it turns out to be, it's a clever appellation that may prove to have staying power. It's not only the triple-D alliteration that makes it so catchy: "Dunkin' Donuts Democrat" may represent the first use of a commercial brand name in connection with a national political candidate. (Did President Ford use a slogan comparing himself favorably with Cadillac? My memory fails me.) We've had soccer moms and security moms and limousine liberals, but they were all lower-case monikers. Dunkin' Donuts Democrats is something different.

A bit of branding background: Founded in 1950 by Massachusetts businessman William Rosenberg, Dunkin' Donuts was always conceived as "a brand for the masses," according to this Brandchannel article. It was an early and aggressive global player, entering Canada in 1962 and Japan in 1970. (Nowadays Dunkin' Donuts sells a Mochi Ring, made with rice flour, in its Asian outlets.) Despite some recent changes in the stores, including wireless access and piped-in music, Dunkin' Donuts still styles itself as a down-to-earth convenience brand favored by cops and other working folks. The company's current slogan, "America Runs on Dunkin'," is "all about heritage,” Frances Allen, the company's brand marketing officer, told Brandchannel. "We are a part of people’s lives every day. We are their daily ritual."

Sounds like Mayberry, USA. But Dunkin' Donuts is no mom-and-pop corner store. In 2006, the company was bought for $2.4 billion by The Carlyle Group, the multinational private equity firm singled out by Michael Moore in his documentary Fahrenheit 9/11 for its connections to Saudi money and its investments in heavily regulated U.S. industries. Dunkin' Donuts today has about 1,900 stores in 30 countries.

Unlike other global brands, though, Dunkin' Donuts has managed to maintain its prosaic, all-American image. (Must have somethin' to do with the dropped G.) And with John Edwards out of the race and his populist message fading from the discourse, and with home and stock-market values plummeting, the association may work in Hillary Clinton's favor. In past elections, the people who responded to working-class messages might have been called lunch-pail or blue-collar Democrats, and in the last few decades they might have voted Republican. Nowadays, who knows? Maybe they're more disposed to grab a Dunkin' Donut and a cup of joe--no Starbucks venti skinny soy lattes for them, thanks very much--and pull the lever for Hillary.

Huckabee has called himself the Wal-Mart Republican. Not as catchy, but it's another example of a brand name attached to a politician.

They've corrected it, but the usually excellent Foreign Policy Passport blog referred to it as the widow's "might". Oy.

"Maybe they're more disposed to grab a Dunkin' Donut and a cup of joe--no Starbucks venti skinny soy lattes for them, thanks very much--and pull the lever for Hillary."

There do seem to be a few hits out there for "Starbucks Democrat" (and also "Starbucks Liberal"), so maybe "Dunkin' Donuts Democrat" was coined specifically with this contrast in mind?

Q. Pheevr: Good point! (And good research, which I was too lazy to do myself.) I see a few Wal-Mart Democrats out there, too; I can imagine them getting into a rumble in the parking lot with Huckabee's Wal-Mart Republicans.

The Dunkin' Donuts font, which appears to be Frankfurter Bold, reminds me of all of the goofy post '60s corporate logos.

As with other familiar things which became ubiquitous at that time, like styrofoam and plastic shopping bags, I feel no nostalgia when I see it.