« Back to Blogging | Main | What Shall We Name the Umbrella? » 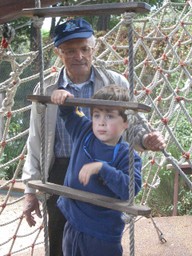 If this were an obituary, it would begin: "Daniel Friedman, a native of Jaffa, Palestine, who was a surveyor for the Los Angeles Department of Water and Power for 41 years, died Feb. 15 at his home in Los Angeles after a long illness. He was 87."

But this is not an obituary, because my father didn't want one. No funeral, no burial, no "celebration of life," either. Cremation, scattering at sea, end of story.

For him, but not for me. Here, in lieu of an obituary, are a few words from a sorrowful heart about the man who, more than anyone, instilled in me a fervor for language.

I demanded to read very early, probably around the age of 3, and my father rose energetically to the task. He taught me the English and Hebrew alphabets and then showed me how the letters joined hands to form words; he pointed out that every Hebrew word had a three-consonant root that could be re-assembled, prefixed, and suffixed in myriad ways. For good measure, he taught me the few words of Japanese he'd picked up on the island of Guam, overseeing a prisoner-of-war camp in the years following World War II: Konnichi-wa. Ohaiyo gozaimas. Ichi, ni, san, shi, go. He'd picked up a little Spanish, too, during his East L.A. adolescence; I remember him explaining that the braceros--migrant farmworkers--then in the headlines got their name from the Spanish word for arm, brazo. A bracero worked with his brazos. What a magical invention language was!

A perfectionist by temperament, Dad also had an immigrant's faith in perfectibility. He'd had to work full time after high school--he installed radios in airplanes at Lockheed's Burbank plant during the war--but after marriage and fatherhood he went back to night school and community college, eventually earning an associate's degree. (My brothers and I attended his graduation.) He enrolled in English classes at L.A. City College and brought home his workbooks to share with me; I thought they were terribly sophisticated--far superior to my own boring schoolbooks. For one thing, they were illustrated with clever cartoons, such as the one that graphically depicted the incorrect use of the possessive pronoun: "Will everyone take off their hat?" The drawing showed a crowd of confused faces under a single gigantic sombrero.

He never stopped learning. He studied tax preparation and became an enrolled agent; after he retired he worked as a volunteer tax preparer for AARP. He never stopped teaching, either. If my brothers and I (or our mother) weren't around to be critiqued, he'd practice on whoever was handy. After his second hospitalization for congestive heart failure, last May, he had a live-in caregiver, the extremely patient, good-natured, and devoted Cristeta, whose first language was Tagalog and whose recently acquired English was more or less ad hoc. "Would you like to lay down, my dear?" she'd ask sweetly. "No," Dad would lecture her. "I would like to lie down." Dad also taught Cristeta little language jokes: she got a kick out of his asking for a glass of "Seven Down," his name for all brands of lemon-lime soda.

Dad taught me to work crosswords, to do the Jumble game in the newspaper, to play Scrabble. (He was less successful--by which I mean, a complete failure--in his attempts to teach me bridge, chess, and his late-life enthusiasm, Sudoku. He excelled at all of them.) I hated* summer camp, but adored the neatly typed letters Dad sent me, which seemed as smart and amusing as anything I'd ever checked out of the public library. Once, when I was in grade school, Dad asked me if I could spell fish. F-I-S-H, I said. "No," Dad said triumphantly. "It's G-H-O-T-I. GH as in tough, O as in women, TI as in nation." For years I thought my brilliant father had made it up; only as an adult did I learn that George Bernard Shaw had invented that particular riddle.

Somehow, despite an impoverished childhood, Dad had acquired a remarkably broad knowledge of classical music. He could hear a bar or two of a Beethoven symphony and immediately identify it. (And then quiz me about it. And get irritated when I came up blank.) He knew a lot of the words to the great operas, too, and even a little of their meaning. Still, I remember his astonishment when--he must have been in his 60s--he got hold of the lyrics to Carmen and figured out that in French, l'amour--love--is a masculine noun. In Hebrew, ahavah is feminine. I could see Dad trying to wrap his brain around this new, utterly contrary perspective. He was floored--and also a bit tickled, I think.

He knew popular music, too--not rock 'n' roll (except for a few novelty songs of the 1950s), but Gilbert and Sullivan, Rodgers and Hammerstein, Lerner and Loewe. He was impressed by the movie versions of West Side Story, Fiddler on the Roof, and My Fair Lady, but uninterested in the stage productions: Why risk going to a live show, he reasoned, where the performers might make mistakes? In the movies, everything was perfect. (Later in life, when he joined an organization through which he got free theater tickets, he modified his position.) He had a knack for embarrassing us kids by breaking into a refrain from "On the Street Where You Live" or "Funiculi' Funicula'."

But the music I most closely associate with Dad is a song we first heard on a family vacation in southern Utah. During an evening program at Bryce National Park, or maybe Zion, a crew of wholesome-looking teenage park employees sang "Try to Remember," from The Fantasticks, which was new to us though by then it had been playing for several years in New York. Dad was instantly and hugely taken by the song. Maybe it was the romantic waltz tempo, or the unusual rhyme pattern--willow, callow, mellow, follow--or the haunting imagery: Love was an ember about to billow. He never completely learned the lyrics, but he would frequently hum the tune and sing Try to remember the kind of September and Follow follow follow. His birthday was in September, and although he never wanted us to make a fuss over the occasion, perhaps he felt that the reference spoke directly to him.

The last verse makes as good an epitaph as any.

* As I typed that sentence I could hear Dad correcting me. He didn't allow us to say "hate"--we were instructed to say "I don't prefer," like Bartleby the Scrivener.

That's a lovely remembrance, Nancy. I'm sorry you lost your dad, but you're lucky to have such a wealth of wonderful memories.

It is a lovely remembrance of your father. And remembrances are for those of us who are left behind, not those who have gone on. How wonderful of you to share it with us!

Wonderful. It's a fine fine memory.

I did wonder about you this week and am sorry to hear of your loss. My heart goes out to you. What a beautiful post on your father's life. Very moving. Thanks for sharing all those personal memories, I loved reading them.

Your father shines through in this wonderful piece that you wrote about him Nancy. If he were alive to read it, I doubt that he would have any corrections to make at all----I mean anyone who would encourage you to say "I don't prefer" was probably never short on opinions. A lovely, loving, tribute which made my eyes tear up as I read it. My thoughts are with you.

This is a beautiful non-obituary. I'm very sorry for your loss, but also grateful to you for giving us this admirable portrait of an admirable man.

What is it about that song? I spent years unable to get it out of my head either, tho unlike my other big earmite (the theme from ":A Man and a Woman"), I at least liked this one. And I also never bothered to learn the words; it was something else, I think the onomatopoeia of 'follow, follow follow follow follow' (it's swinburnish, makes me think of onrushing water).

I also agree with your dad that movies are generally much more satisfying than plays. It's the magic of editing. The product is seamless. Good guy. Wish I'd known him.

Also: 'Amour' being masculine is hard to swallow, admittedly, but I was more amazed that the German for sun is feminine (die Sonne), moon masculine (der Mond).

This is really lovely, Nancy. Thanks for sharing this wonderful portrait of your dad.

My thoughts are with you. A daughter's relationship with her father is precious beyond words.

Your epitaph for your father brought me to tears. If it is any consolation, his legacy is a life of love well-lived. May you be comforted among the mourners of Israel.

My sympathies, and thank you for passing on those lovely memories at a painful time. It makes me treasure my own father all the more.