"Where Are the Gremlins of Yesteryear?" 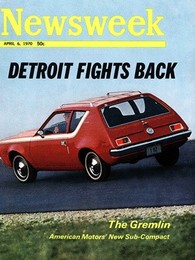 Where are the Vipers, the Mustangs, the Silver Ghosts, and all the other legendary car names?

Gone to numerals, every one--or nearly so--according to "Don't Like Car Names? 2BAD," in the Los Angeles Times.

"The industry is on an increasingly strict diet of alphabet soup with numerical garnish," reports Times staff writer Ken Bensinger. "Alphanumeric nameplates -- which consist of nonsensical combinations of letters and numbers -- were on 135 models in the 2007 model year, compared with 80 a decade ago, according to Kelley Blue Book."

Blame BMW and Mercedes, which set the bar for naming luxury cars with their decades-old alphanumeric nameplates -- BMW with the 3 Series, 5 Series and 7 Series; Mercedes with the C-, E- and S-Class.

When Japanese automakers launched their own luxury lines, they had what Karl Brauer, editor of Edmunds, calls "Euro-envy" and were eager to associate themselves with the German reputation for quality. Thus Lexus debuted with two-letter names; Infiniti combined letters and numbers.¹

Sometimes the numerals are a decipherable code: a BMW 7-series model costs more than a 3-series. Lincoln's various MK models represent an abbreviation of the automaker's historic Mark series, the first of which was introduced in 1955.

"But," writes Bensinger, "the world isn't perfect. Many alphanumerics have no meaning and make for a mystifying game of Scrabble with no apparent rules."

"The confusion factor is huge," said Bob Martin of Car Lab, an industry consultant in Orange. "There's no potential for differentiation."

Truth be told, automakers haven't always hit home runs with conventional naming. I'm guessing Lincoln would prefer that we forget the Maharaja (1953), the Mardi Gras (1954), and the Machete (1988). (I've always wondered about the Lincoln Aviator, too: Aren't cars supposed to stay earthbound?) Toyota's nomenclature archives include the Soarer (ouch!), the WISH, and the WiLL (draw one up before you drive one?). Suzuki once marketed a four-wheeled vehicle called the Cappuccino. Nissan made Spanish-speaking buyers wince when it introduced the Laputa and the Moco. And let's not forget the Wingle, the Naked, the Bimbo, the That's, and the Deliboy.

Still, for every daft model name there are many that have achieved greatness: Crossfire. Impala. Thunderbird. Phantom. Or any of the historic Studebaker names--from Lark to Avanti to Gran Turismo Hawk--that defied the clunky-sounding corporate name (frequently mocked as "Strudelbaker") with flights of sheer poetry.

¹True story: more than a decade ago, Infiniti paid a name developer (not this one, dammit) $75,000 to come up with two "utterly unused letters"--Q and J--with which to identify the carmaker's early models. That's $37,500 per letter. And that's the sort of profligacy that gives name developers a, um, bad name.

Then there's my all-time favorite car model name -- Renault's Twingo. It's so darn cheerful, a perfect name for a cute little car (http://www.twingoconcept.com/).