It's a Dirty Job, and Butt Out! Does It Efficiently

c) The Analyst Is In

d) Happy Entrails to You

There's a how-to video on the Hunter's Specialties site. Friendly tip: don't watch it while eating lunch at your desk.

Word of the Week: Nosism

Nosism: The use of "we" in referring to oneself. From Latin nos, meaning "we." Also known as the royal we ("We are not amused"--Queen Victoria) or the editorial we ("We recommend a No vote on Proposition 785"--the Messenger-Tribune).

"Only kings, presidents, editors, and people with tapeworms have the right to use the editorial 'we'." -- Mark Twain.

A few links to amuse you while I spend the next several days offline.

The Tensor (of Tenser, Said the Tensor) answers all the unanswered questions posted by the Explainer at Slate.com. One of the terser Tensor explanations:

Q:  Can a baby get drunk off of nonalcoholic beer?

A:  Only if that baby is a total lightweight.

Designer Corey Holms has created an elegant taxonomy of the animal species in logos. I can't quite place the dog... (Via Jason Kottke.)

On any given Sunday, you're likely to hear one of the well-roasted chestnuts in the Sports Cliché database. Looking for a non-sports cliché? Check out the Political Cliché list or the list of media clichés at Banned for Life. Also useful, if only to know what to avoid: the encyclopediac Cliché Finder maintained by Morgan Friedman (no relation).

Pinsetter, a project of the creative folks at the Chicago ad agency Coudal Partners, lets you express yourself in 1-inch pin-on alphanumeric buttons, just US$1 each, or a complete set of 87 buttons for $39 plus $2 shipping. While you're on the Coudal site, you could do worse than to check out all the other great stuff there, including Lowercase Tee (love that kid-size Obama-bama shirt). I wrote about other Coudal projects here.

Josh Parsons, a lecturer in philosophy at Otago University ("New Zealand's top-ranked university for research"), assigns letter grades to the flags of the world according to some highly subjective and very funny criteria: graven images, colonial nonsense, "makes me nauseous, " etc. The United States gets a C+: "too many stars"; "too busy." (Via Dynamist blog.)

More from the Southern Hemisphere: Derek Abbott, in the School of Electrical and Electronic Engineering at the University of Adelaide, has compiled a table of animal noises in 17 languages, from Dutch to Urdu. Scroll down to see multilingual animal commands and animal pet names.

Frontiers of Science: The Quest for Corporate DNA

A while back I dipped a toe into the gene pool and asked: what the heck do companies mean when they talk about "our DNA"?

Presumably they are trying to make a statement about deeply embedded values, but what does it really mean to have something in your DNA? For example, do they mean to imply:

Or could it be, as an anonymous commenter suggested, "Our organization requires thousands of years to change in any significant manner"?

From "Jeepers, Rappers, Where'd You Get Those Arms and Torsos?", in today's New York Times (fabulous headline, by the way):

“The marketing of the images is so key now to so many different bottom lines,” [hip-hop historian Jeff] Chang said. “Not just the music industry, but a whole range of consumer products. Your body is your brand and you’ve got to maintain that image. The machoness and braggadoccio, that’s always been a part of hip-hop. What’s different at the highest levels of the money game in hip-hop is the size of it all.”

Jessica Stone Levy, straying slightly from her trademark-law beat, wrote in an e-mail:

Clearly it should have machismo instead, which would have been a lovely counterpart to braggadoccio, but I also read the word with a Yiddish accent, with the emphasis on the second syllable, and think it'd be a lovely way to describe a Jewish guy who's striving to be macho yet inevitably failing.

Or perhaps it should be pronounced with a guttural ch, to suggest a kinship with machetunim (pronounced, as Leo Rosten memorably put it, "mokh-eh-TU-nim, with a crumb-expelling kh, to rhyme with 'Bach attune him'"), that handy Yiddish word meaning "all of one's relations by marriage"--far more inclusive and less bureaucratic than in-laws.

"She's my second cousin once removed or my first cousin twice removed--oh, I don't know, she's just my machoness."

My own first impression was that machoness was a new member of the titled class: countess, duchess, marchioness, machoness. That feminine -ess suffix does take the cojones out of macho, though, doesn't it?

Update: Or do you think it's Scottish? "Aye, Angus MacHoness--now, there was a manly man." 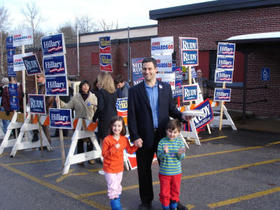 Not about words, names, or brands; just an excellent idea.

Design Observer is partnering with the New York Times to sponsor Polling Place Photo Project 2008, in which voters across the country submit their photos of the election process. Photos from the Iowa caucuses and New Hampshire primary have already been submitted; you can view them here. If you're reading this in Michigan, there's still time to take and submit photos of the primary election being held today. Within the next few weeks, 28 more states (including my own, California) will hold primaries.

a nationwide experiment in citizen journalism that encourages voters to capture, post and share photographs of this year’s primaries, caucuses and general election. By documenting local voting experiences, participants can contribute to an archive of photographs that captures the richness and complexity of voting in America.

Also captured in the project's questionnaire: the type of ballot used, the number of people in line, and the length of the wait.

The Polling Place Photo Project is also linked to the AIGA's Design for Democracy initiative, which seeks to improve ballot and election design.

The big news coming out of the North American Auto Show in Detroit, which opened to the press yesterday, was Chrysler's circuslike introduction of its 2009 Dodge Ram truck.

Led by a couple of whip-wielding cowboys, 120 longhorn cattle made their way up Congress and Washington streets to Cobo Center, where the show is being held. Amid the livestock were a couple of the new 380-horsepower trucks.

According to the Detroit Free-Press, the cattle stole the show, especially when a few of them "started mounting each other as [Chrysler President Jim] Press talked."

Well, we all love us some frisky fauna, but ... cows? It's called a Ram, dummies: shouldn't it have been leading sheep?

Maybe they couldn't round up enough sheepboys.

Word of the Week: Warchalking 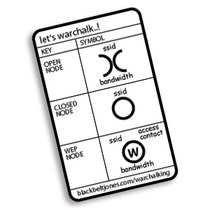 Warchalking: The drawing of symbols in public places to advertise open-access wireless networks.

Steve Portigal blogs in All This ChittahChattah:

From All Things Considered the remote California town of Iowa Hill will finally get land-line phone service. And their cell coverage is spotty, at best. The woman interviewed explains that people in the community have designated areas where there is cell reception as phone booths; a nice colloquialism since we’re likely to envision a purpose-built structure rather than a warchalked wooded area. She also describes the local 911-proxy: fire your gun three times in the air and hope someone comes to your aid.

Warchalking icons are direct descendants of symbols developed by hobos during the Great Depression to indicate safe camps, friendly householders, and signs of trouble.

The term warchalking was formed by analogy with wardriving: the act of searching for wireless networks while driving in a moving vehicle equipped with a Wi-Fi-enabled computer. Wardriving in turn is derived from wardialing, a term used in the 1983 movie War Games to signify stumbling upon a connection to a military computer while looking for games and bulletin boards by means of a dial-up modem.

More on warchalking at O'Reilly Network, which is where I found the illustration.

The Passion That Dares to Speak Its Name ... Again and Again and...

It's been a while since I've mentioned the scourge of corporate "passion," but that doesn't mean the P-word has withered on the vine. No, indeed.

Lots, as it happens.

In fact, Terrett found at least 11 companies that used the slogan "Passionate About Print." He has visual evidence.

And that's just in the UK. On this side of the pond, Corporate Printers (is that a passionate name or what?) in Cummings, GA, is "as passionate about print as you are." I can't resist quoting the first sentence of Corporate Printers' home page: "Nothing has the sheer emotional sizzle than a beautiful piece of printing." Tip: Less passion, more grammar.

PrintJuce.com [sic], in Las Vegas, is "passionate about print media and we pay attention to details." A new diagnostic category: obsessive-compulsive-passionate, or OCP.

Rosiedog Creative Services in Las Vegas is also "passionate about print." And lukewarm about web design, to judge from the insanely wide column width on its home page.

PrintPlace, in Arlington, TX, gives the slogan a creative twist: it's "passionate about printing."

Read my original post on the topic, "Our Passion Is Your Problem," which includes my rhyming ode to corporate passion, suitable for setting to music. Still not satisfied? I've got lots more.

Posted at 10:36 AM in Buzzwords, Passion, Slogans and Taglines | Permalink | Comments (0)

More on the Xerox "Rebranding"

Armin Vit, at the Brand New blog, fumes articulately about the new Xerox logo, which I wrote about earlier this week:

The new identity ... may signal a new era for the company but, as far as we designers are concerned, it merely signals the full embrace of the senseless threedimensionalization of the corporate world. ...

I find it rather humorous — and please excuse me while I get my biggest gripe out of the way — that this logo "animates" better and how it's a key strength. Yet, the best that could be done (at least at launch) is this? Seriously?

(Scroll down the post to see the witless animation in action; I can't manage to embed it here.)

Why is that marble not rotating? Or exploding? Or building out of thin air? Heck, morphing into Xerox's CEO would be more interesting than a pedestrian zoom and shine.

Lots of "amens" in the comments (Michael Bierut of Pentagram: "I wish I were dead"). And keep scrolling to see Von Glitschka's comment with the visual of the kid shooting logo-ized marbles.

And while we're piling on, here's my own gripe du jour: Redesigning a logo does not equal "rebranding." A logo is a representation of the brand, not the brand itself.