Don't Know Much About History 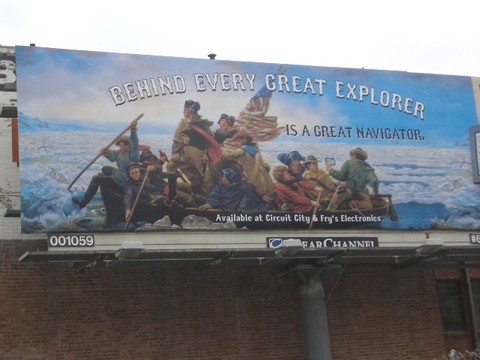 For those of you who need a refresher course, that's George Washington directly below the space between "Behind" and "Every." The painting is Emanuel Leutze's 1851 Washington Crossing the Delaware, which, as every schoolchild used to know, commemorates the beginning of a surprise attack on Hessian forces in the Revolutionary War, Dec. 25, 1776.

George Washington may have been first in war, first in peace, and first in the hearts of his countrymen--and indeed a land surveyor in civilian life--but one thing he was not was an "explorer."

The advertiser is Mio Digiwalker. If I can't trust their research, how can they expect me to trust their technology?

(And yes, the painting itself is full of inaccuracies, too. For one thing, the actual crossing took place at night.)

I see they have altered the picture slightly to show their silly product being used . . .overall a lame effort.

Wow. As if they couldn't find their way across a river... The dumbing down of America continues.